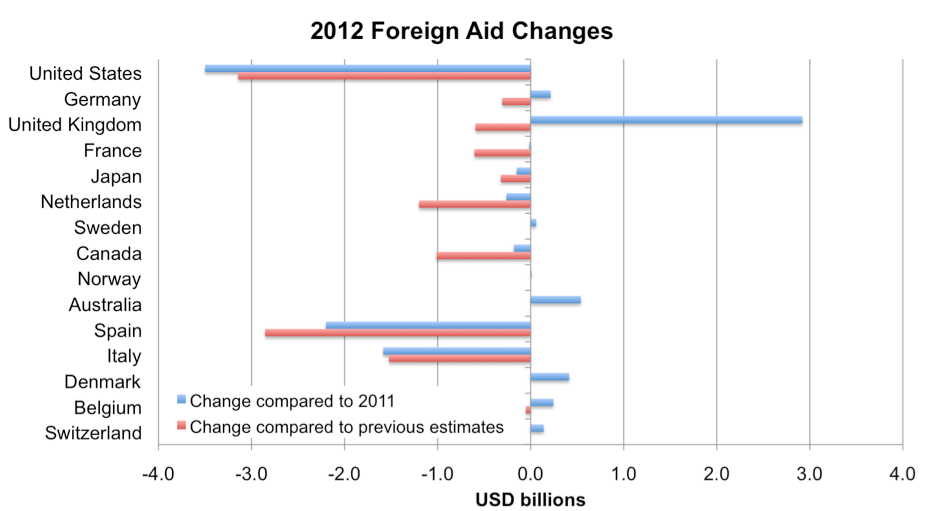 The decade from 2001-2010 saw an aid boom, with aid increasing from about $80 billion to about $130 billion over this period (in constant 2010 USD). In the wake of the 2008 financial crisis, aid initially seemed remarkably robust.

But foreign aid budgets of donor countries are now coming under pressure from austerity measures, lower than predicted economic growth, and calls to reduce “unnecessary” spending. The OECD has recently released data on Official Development Assistance (ODA) for 2011, showing a 3% decline after inflation from 2010. Our analysis of 2012 budget documents, contained in this new Devpolicy brief [pdf], suggests that more cuts are on their way, and that this is indeed the end of the aid boom.

This blog summarizes our main findings and, with the Australian budget to be brought down on May 8, explores the implications for Australian aid.

This figure shows, for the 15 biggest OECD (rich-country) donors, 2012 aid budget figures  and estimates (using the closest fiscal year) relative to both 2011 and earlier estimates. These are imprecise estimates and comparisons, but the most recent that are available.

There are some huge cuts in the offing. Overall, our best estimate for the United States, the world’s biggest donor, is a 2012 aid reduction of $3.5 billion.

Other cutbacks are less dramatic, but no less important. Canada has abandoned its plans to scale-up aid by 8% each year, instead aiming to shrink the budget 7% by 2015. The Netherlands has cut 2012 aid to €4,420 million, €917 million less than previous estimates, corresponding to a decline from 0.8% to 0.7% of GNI.

The 15 aid budgets we considered together forecast 2012 aid spending at $3.4 billion less than in 2011. Adjusting for inflation, the real value of this year’s aid budgets for the top 15 donors is 4.9% less then in 2011. Only Australia, Belgium, Denmark, Switzerland, and the UK are expected to increase aid in 2012 by more than inflation.

We can also compare the most recent estimates for 2012 aid spending to projections donors themselves made in 2010 or early 2011. This year, aid agencies in the top 15 donor countries will receive as much as $12 billion less (in current dollars) than they would have anticipated based on their own governments’ earlier strategy and budget documents. This $12 billion discrepancy is much greater than the $3.4 billion cut from 2011 because several countries which did not reduce their absolute aid levels nevertheless abandoned their plans to scale up aid.

The figure below summarizes our estimates for aid in 2012 compared to historical spending, in constant 2010 dollars.  To make our estimates comparable with historical data, debt relief has been excluded from aid or Official Development Assistance (ODA) figures. To allow for uncertainty in calibrating 2011 budget items for the top 15 donors to historical ODA volumes from all donors, we present a range of estimates. (For more detail on methodology, see the policy brief [pdf]). Our best estimate is that OECD aid (excluding debt relief) in 2012 is about $114 billion or about 0.28% of total OECD GNI, its lowest level since 2008. 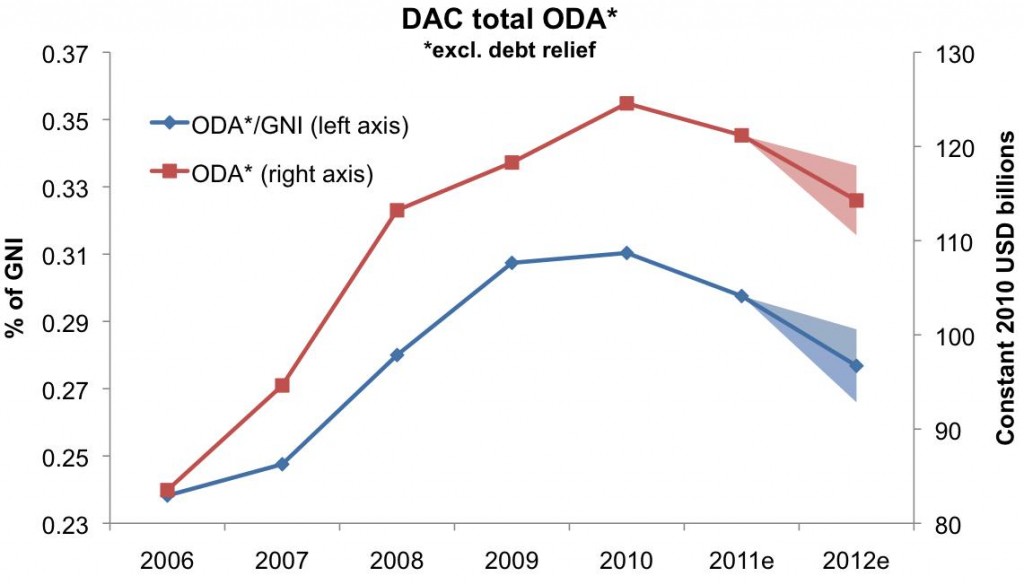 Aid from non-OECD donors (such as China and Brazil) is significant and growing, but it is still small compared to OECD aid. One estimate [pdf] puts it at about $10 billion. Over the longer term, increasing aid volumes from emerging donors may well fill gaps left by OECD donors, but not in the next few years.

What about philanthropy? Global philanthropy has also been on the rise. But, sensitive to economic hardship and worth less than half of total ODA [pdf], in the short term changes in private giving are unlikely to offset government aid cuts.

The figures in our brief and this post cover Australia up to the current fiscal year July 2011-June 2012. What will happen to Australian aid next year is currently a matter of much speculation in the run up to the May 8 2012-13 budget. Australia is in fact particularly strongly positioned to help shore up global aid. As a country which is not suffering fiscal stress and has benefited greatly from the resource boom, we can afford to give more. As a country which is still well below average in terms of aid generosity (12th out of 15 in terms of aid/GNI for the major donors), we should give more. And as a country with an “improvable but good” aid program, our aid will make a difference.

The Global Fund’s money woes are well known. Other agencies and countries reliant on the aid dollar will also face cutbacks. Not all aid is well spent, but ultimately the end to the aid boom has to be expected to hurt the world’s poorest. Now more than ever, to help fill emerging global aid gaps, we need more and more effective Australian aid.

Kathryn Zealand is a Researcher for the Development Policy Centre. Stephen Howes is the Director of the Centre.