Once a year, every year, late at night, I start howling.

Don’t worry, it’s not lycanthropy. My problem is much more prosaic: I try to keep track of the New Zealand aid budget.

New Zealand aid transparency is slowly improving. In between MFAT’s intermittently updated website, and its annual reports, you can – some time after the fact – cobble together a sense of what’s going on. (You can also use OECD reporting, but only after a long lag.) There’s nothing as user-friendly as Australia’s “Greenbooks” of historical aid data. Nor is there anything as timely as Australia’s budget night aid releases.

Hence the howling. When New Zealand’s budget is actually released each year, working out the barest of basics of what’s changing in New Zealand aid requires devoting an evening to augmenting this spreadsheet with numbers buried in places like page 90 of this PDF. Even then it’s imperfect. I have, for example, had to keep aid to Cook Islands in the totals. The government still calls the money it gives the Cook Islands aid (about NZD50 million a year I think), even though it is no longer an ODA eligible country. Conversely, New Zealand may give some aid outside of Vote Foreign Affairs, but I can’t find it in budget documents. So I may be missing some aid spending. The big picture is correct enough though.

And here’s the big picture: 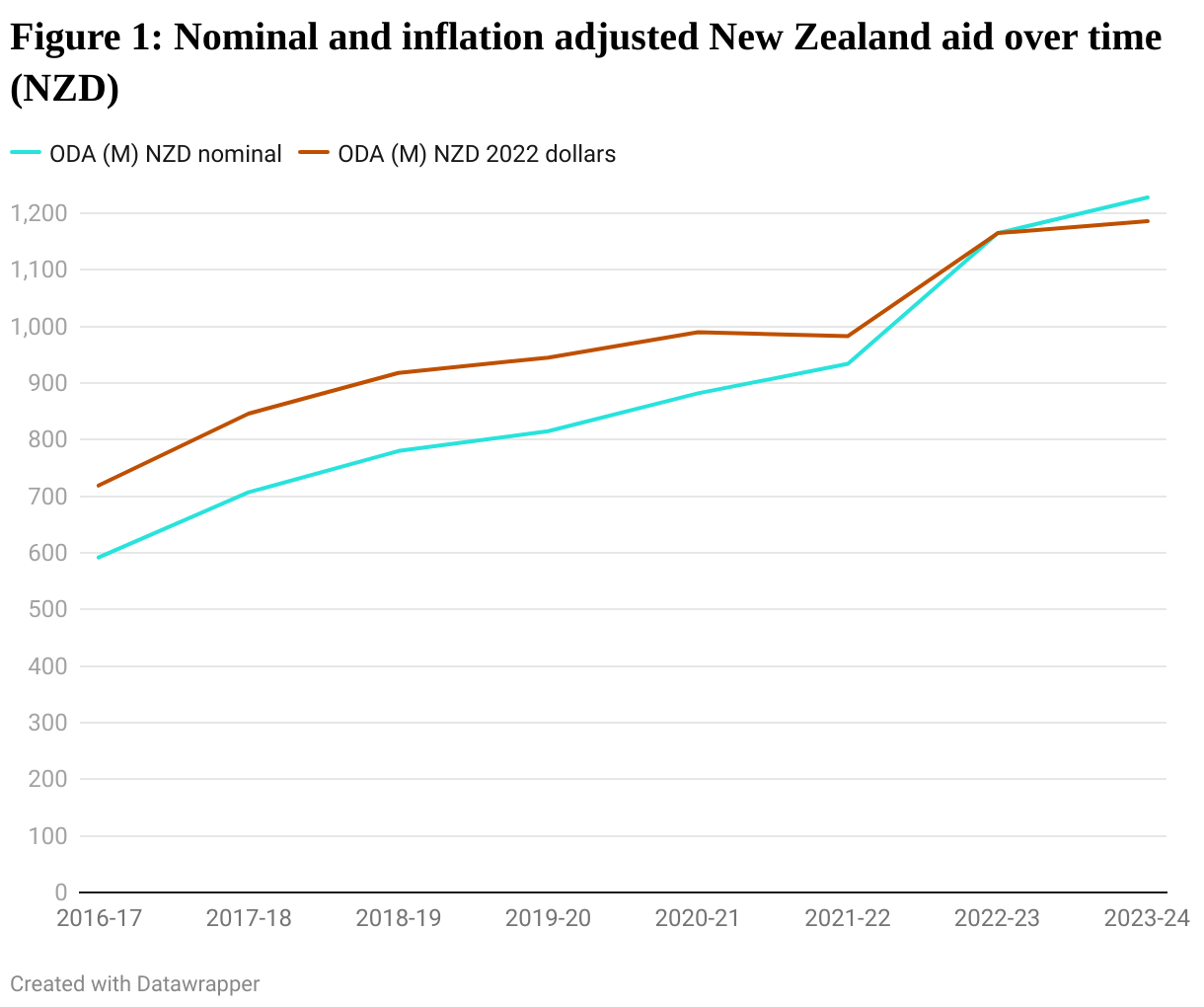 What the chart shows is that, when inflation is taken into account, New Zealand’s aid actually fell last year. But this, to be fair, was only because of high inflation. Aid increased nominally. And New Zealand aid is set to rapidly increase over the coming year. By the 2023-24 financial year, New Zealand aid will top one billion NZD for the first time in our country’s history. That’s good news.

There’s more good news in the next chart, which combines aid data with GNI estimates from Treasury and Stats NZ . 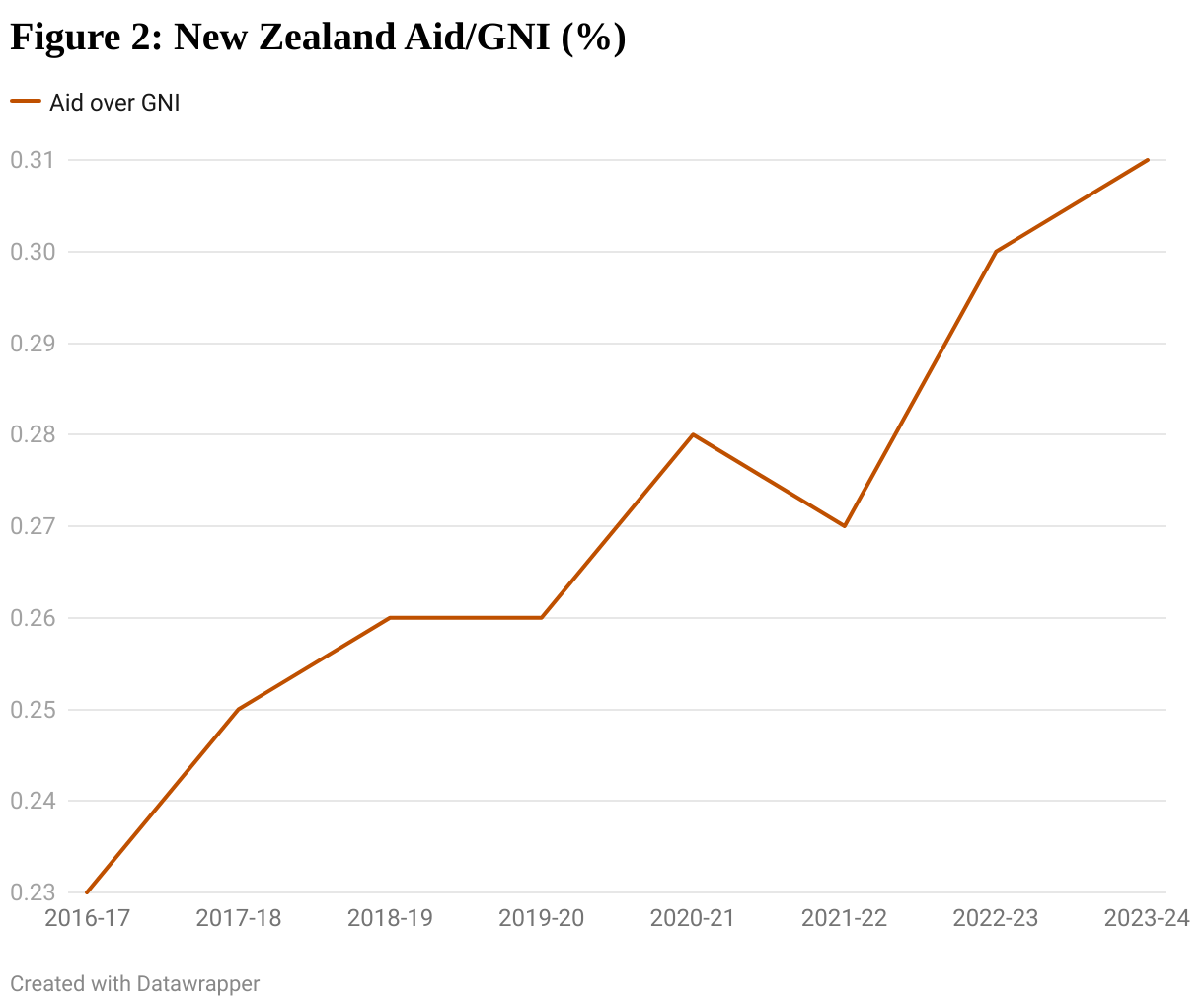 If GNI projections are right, New Zealand’s ODA/GNI ratio will top 0.3% for the first time since 2008. (Please remember this includes aid to Cooks; if we were to follow OECD rules, the ODA/GNI would be about 0.29%.) Even with the Cook Islands complication considered though, the trend is still in the right direction. Good news.

The more complicated news is that, as best I can estimate, almost all the coming aid increases will be because of climate finance: money we give developing countries to help them mitigate their own emissions, or to help them adapt to the effects of climate change. (I’m still working on this and will post again once I have a better sense of New Zealand climate finance.)

It should be new and additional to existing aid spending though. In New Zealand’s case, unlike Australia’s, it seems like the government is not robbing the existing aid budget to pay for climate finance. That’s good. However, as best I can tell, New Zealand won’t be meaningfully increasing aid outside of climate finance anytime soon. In a world reeling from a food crisis and COVID-19, not to mention perennial development problems, this isn’t good enough.

Remember, aid is about 1% of government spending in New Zealand. We could quite easily do more.

If you want my data and calculations, please feel free to send me an email.