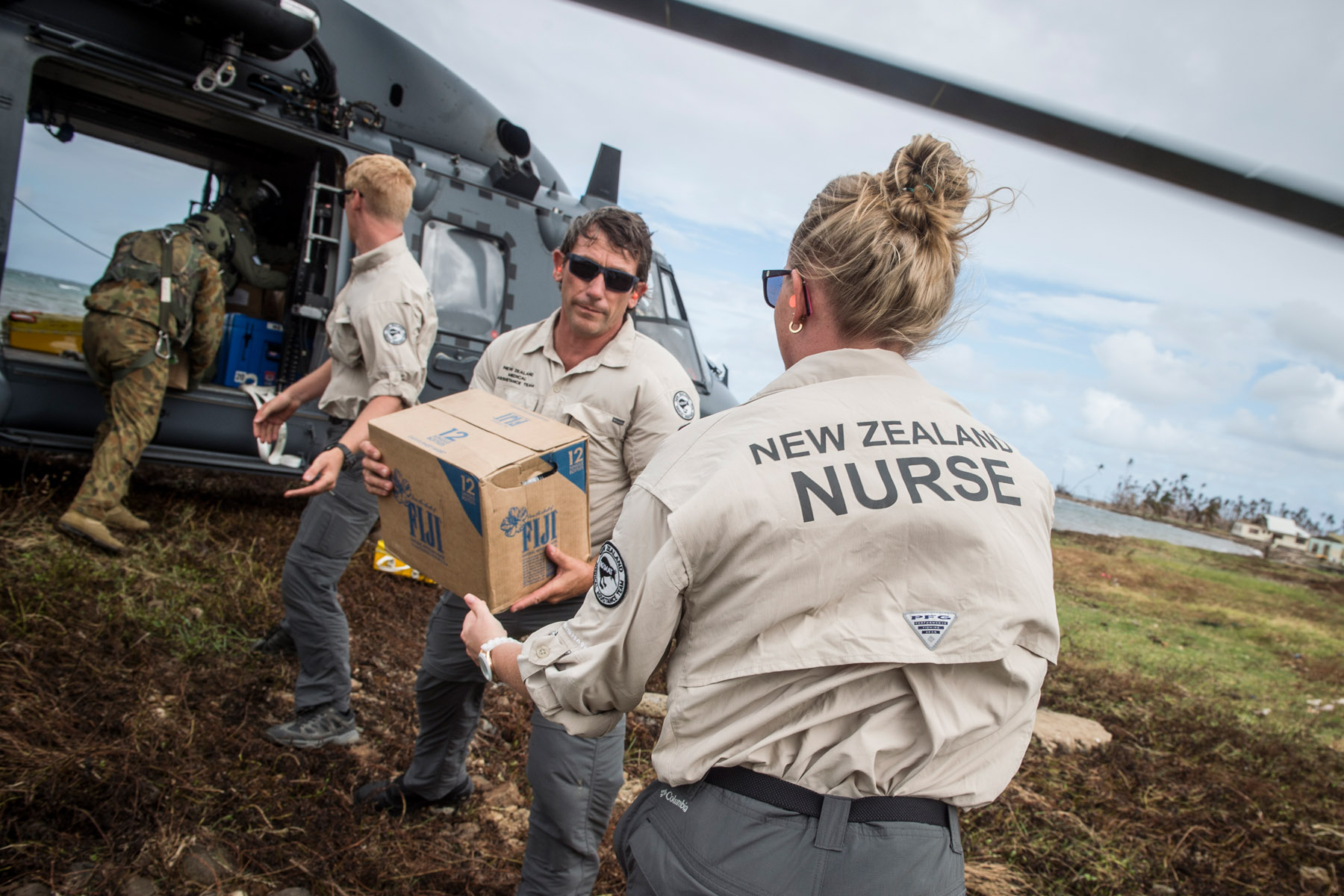 Just how unique are Australians’ attitudes to aid? We know Australians approve of government aid, yet when push came to deficit shove most preferred aid cuts over alternatives, although their enthusiasm for further cuts has mellowed somewhat. We also know most Australians want their government aid given for altruistic ends.

We have good data on all of this, but what we haven’t had is a sense of how unique Australians are in their views — until now. We’ve just started analysing the responses to questions we placed in a New Zealand public opinion survey (n=1124) that allows us some comparisons.

Obviously, we’re interested in New Zealand for its own sake, but New Zealand is also a handy comparator. Both Australia and New Zealand have run deficits almost every year since the Global Financial Crisis. And both countries share much in their political histories, their ties to the Pacific, and their unhealthy fixations with sports that involve men crashing into each other at high speed. What’s more, as Devpolicy’s Aid Tracker shows, Australia and New Zealand languish close together in the aid generosity league tables. And the 2015 Australian (p. 12) and New Zealand (p. 13) aid stakeholder surveys suggest that both countries appear to give non-trivial amounts of ‘aid’ to advance their own interests.

Our first question asked New Zealanders about aid volumes (in 2015-16 the NZ aid budget was about AU$510 million, similar as a share of GNI to Australia’s). Importantly, to help improve the validity of these responses, we told respondents the proportion of the New Zealand government’s budget that goes to aid. The results from this question can be seen in the first chart below. 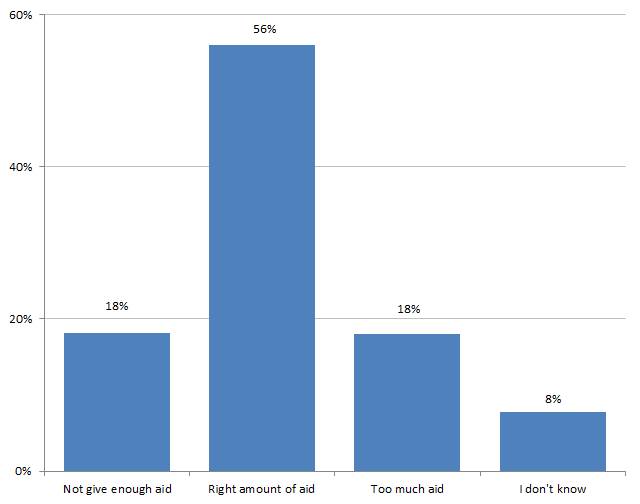 By way of comparison, the chart below is from a recent survey in which we asked a very similar question in Australia. 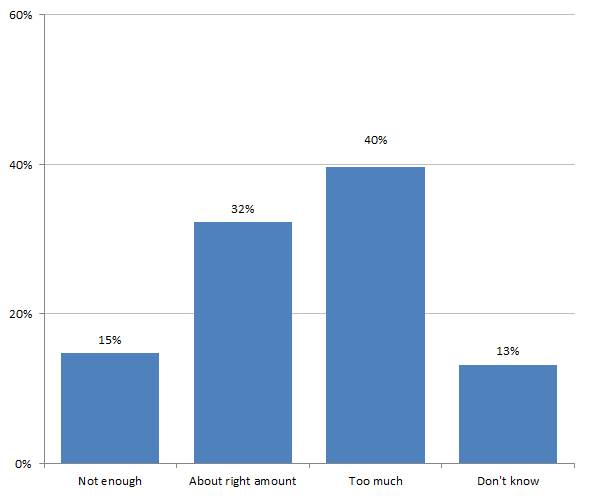 Note: Full question wording was, “Every year the Australian government provides aid money to poorer countries. Currently just under $1 out of every $100 of federal spending is given as aid. Which of the following options best reflects your opinion about aid spending …”.

There are clear differences across the response categories. Far fewer New Zealanders are keen on cuts, many more favour the current amount of aid, and more are keen on increases. Given this, it is tempting (at least for the one of us, who is a New Zealander) to conclude that this is powerful evidence that New Zealanders are intrinsically nicer people. Alas, this would be reading too much into the data. A more likely explanation is that New Zealanders haven’t spent the last few years subjected to talk of budget crises and the need to cut back on spending. Indeed, the most striking feature of the New Zealand chart is the popularity of the status quo. There hasn’t been talk of budget emergencies in New Zealand. Nor has there been any meaningful campaigning for aid increases. And so our guess is that most New Zealanders are simply assuming that if no one’s hollering, things are probably about right.

We also asked respondents about the ends they wanted aid given for. Figure 3 shows the results of this question.

Figure 3: New Zealanders’ opinions on the purpose of aid 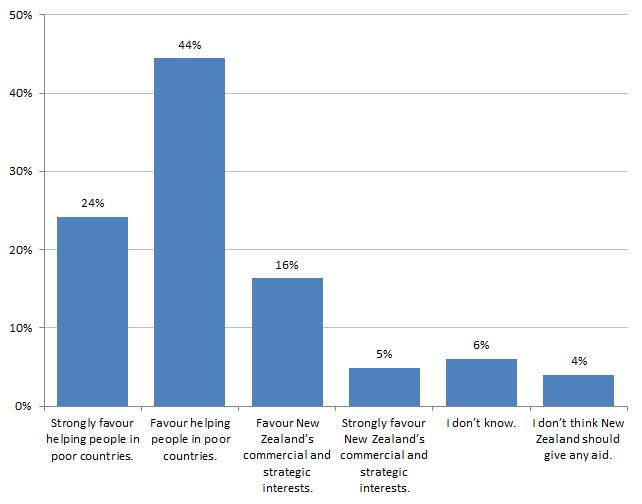 So, as far as comparisons go, we have similar preferences for aid purpose, but quite different preferences about aid volume. Australians aren’t entirely alone in their views on aid, but nor are views identical on either side of the Tasman.

Beyond comparisons, we also took the opportunity in the New Zealand survey to ask some other questions about aid (we’re doing the same in Australia, but in a postal survey, meaning that we won’t have results for a while). In one of these additional questions we asked New Zealand survey respondents about whether they think aid works. Figure 4 shows what we found.

Figure 4: New Zealanders’ opinions on the effectiveness of aid 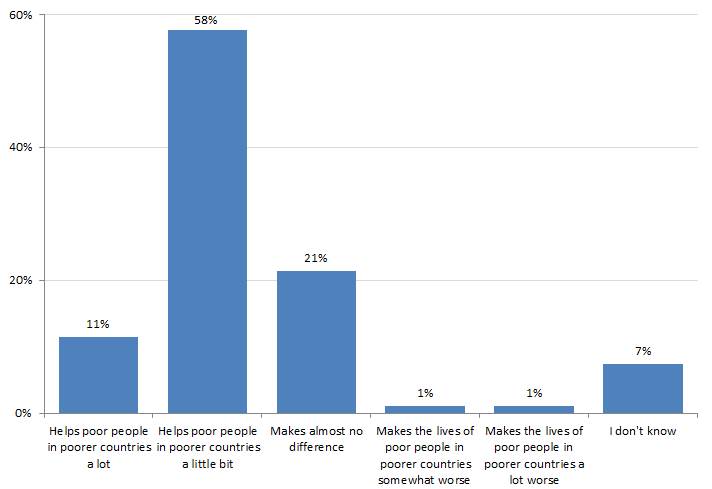 Note: Full question wording was, “Thinking about the aid that the governments of wealthier countries such as New Zealand give to poorer countries, and what this aid actually achieves, on average do you think that this aid …”

The results are interesting for two reasons. First, the distribution of responses. Cautious optimists are by far the most prevalent, while not many people confess to not knowing (surprising given how complex the question really is), and only a tiny share of respondents believe that aid makes things worse (not many Angus Deaton readers in NZ obviously). Second, there is a relationship, although it is not as clear cut as one might expect, between beliefs about efficacy and beliefs about volume: New Zealanders who think aid works are more likely to favour increases. We have more analysis to do on this, and it won’t be until later in the year that we can analyse Australian views, but for now it appears that Kiwis are somewhat consistent in what they think aid can do and how much aid they want their government to give.

We will post again once we have analysed the New Zealand data more, and also once our new Australian data starts coming in.