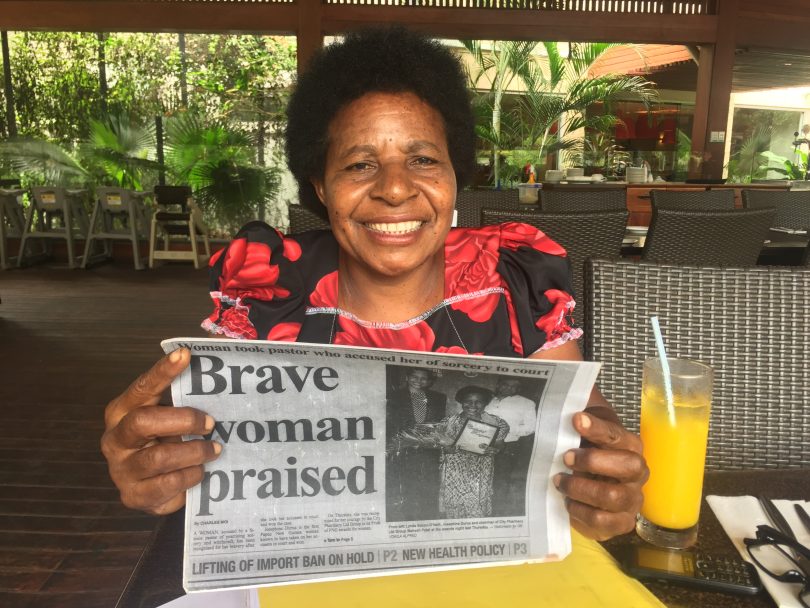 “Many people kill women with this word” stated a survivor of a sorcery accusation. Hers was just one of many reports we have collected showing how accusations of sorcery make the lives of those accused and their families highly precarious. These accusations often do eventually lead to violence. Even more frequently, but less publicly, they lead to lives of constant fear, of persecution and displacement. Survivors report having to be guarded in their movements, confined to their houses, constantly looking over their shoulder, and afraid that even if they move to a completely different place, their story will eventually catch up with them. On 30 March this year, Gulf Governor Chris Haiveta correctly observed that violence is only the end result of sorcery accusations, and that there are other issues that also need to be addressed. One of the most significant of those issues is whether those who have been accused of sorcery can ever clear their names and resume their place in their community. If so, how?

In a recent period of fieldwork, a survivor asked me, in a state of desperation, “Is there any law to go away from this word, sorcery?” She had not been physically attacked, but had been accused, and was tormented by the fear that the next time someone in her community died she would be targeted. After the accusation, her friends and family had started to withdraw from her. She felt isolated, afraid and also furious at the injustice of the situation. Like so many accused, the original accusation was made as a result of a mere coincidence between her presence and a particular event, but she was charged and tried in the minds of the community without a chance to explain herself, or even be aware that she was under suspicion. Her fear that next time she would be faced with violence is borne out by our research, which has found that a salient factor in predicting violence against someone accused of sorcery is whether or not they have been accused before.

It is therefore imperative to address the question of what survivors can do to clear their names, and to learn from examples of those who have. In our research we have identified some pathways used by survivors to try to clear their names. One mechanism is through bringing a case of defamation in the District Court. In some courts, the Magistrates deal proactively and positively with such cases, requiring the person who has made the allegation to prove it, and if they cannot bring evidence to substantiate their claim then ordering them to pay compensation. The Magistrate may make statements such as “from now on I do not want to hear anything more like that.” The complainant’s safety may be further secured by an interim or a permanent protection order stopping further accusations or threats being made. This approach does not appear to be standardised across the country, but it is one that should be better developed and widely adopted.

Village Court Magistrates also have jurisdiction in such cases through either their mediation function or through their jurisdiction granted in the Village Court regulation that still include offences involving sorcery. One Magistrate stated that she encourages people who have been accused to bring their cases before the court to publicly address the issues so they can get over their shame and live their lives once more. She explained:

“The story may have got really confused and so we bring everyone together to unpick it and so everyone can see what happened. They are then able to understand the information. Then they go away and when they come back they understand. They had the chance to hear both sides. . . . When you ask questions of the people who are accusing the accused . . . even if they are really angry because they have instigated it, they may have heard the story, someone may have told the story differently and they may have got the whole thing all confused. But during the court hearing things start to get into perspective when you talk to individual people and they get to see the whole picture.”

She concluded by noting that when someone has been accused for nothing there also has to be a “tok sori” (apology). “We always tell people the best way to heal or to solve problems is to apologise to the person who has been accused.”

A final example of a positive intervention was recounted by a police officer. She had received a complaint from an older woman that her husband had accused her of being a sorcerer in order to pave the way for him to get a new wife. The police officer called the husband to the station and explained to the husband how serious the accusation was and what consequences it could have for the wife, and that he would be liable if any harm came to his wife in the future as a result of that accusation. The husband confessed that he was looking for a way to marry a younger woman and apologised to the wife, explaining he had not realised how potentially harmful his actions could be.

These pathways are often created by caring state officials looking for creative ways to help women and men seeking to rid themselves of the crippling insecurity caused by an accusation of sorcery. It is important that these initiatives are widely shared through the state justice system and other examples discussed and widely shared and practiced.

These acts of leadership by state officials need to be supported by family members, neighbours, and community leaders, including church leaders, as the cases where they work best are where the victims have multiple sources of support. Particularly important is ensuring that those accused are included in daily rituals such as eating and socialising. We have also heard of examples of courageous and compassionate individuals who consciously invite accused persons to participate in community events and publicly share food with them, to demonstrate to others that there is nothing to fear. Again, these examples need to be more widely circulated to inspire others to act in such ways.

Sadly the pathways identified here are only used in a small minority of cases, and successful in even fewer. For most cases, accusations linger, stuck to someone “like a birthmark,” and are likely a hidden trigger for significant amounts of internal migration within PNG. These individuals and their children, who often share their stigmatisation, are truly an unrecognised class of refugees within PNG.