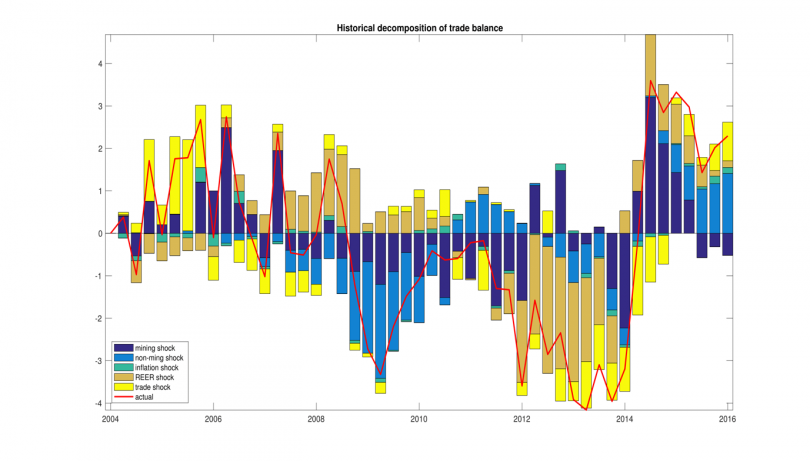 Papua New Guinea’s (PNG) economy is no stranger to balance of payment (BoP) shocks. The most recent occurred in 2014 when the inward flow of capital abruptly halted due to construction of the PNG LNG project nearing completion. The reversal in capital flow accompanied by the then-weak commodity prices triggered a rapid decline in the value of the kina.

The sharp decline in the kina prompted the Bank of PNG to intervene in the foreign exchange market by exhausting its foreign reserves and imposing a rationing on foreign currency in mid-2014. During much of this period, PNG’s foreign reserves were only sufficient to support around five to six months of total imports. Various studies have reported that the main concern for businesses in PNG is the shortage of foreign currency and how the crisis has led to severe imports compression and weak economic growth.

We examine these questions by employing the Vector Autoregressive (VAR) model (an econometric technique) with Bayesian inference to overcome the paucity of long time series macroeconomic data in PNG. There are two outputs from the model estimation: the impulse response functions (IRF) and historical decomposition analysis. The IRF describes the evolution of PNG’s trade balance along a specified time horizon after a one-time shock, whereas the historical decomposition measures the contribution of different shocks on the historical evolution of PNG’s trade balance. If both interval bounds are jointly above or below the zero line, it indicates statistical significance at the chosen significance level and specific horizon for the IRF.

The IRFs presented in Figure 1 show that one standard deviation positive shock in the resource sector and a devaluation in the kina’s real exchange rate improve PNG’s overall trade balance significantly. These results are hardly surprising considering that resource exports make up more than 80 per cent of PNG’s total exports and that the real exchange rate of the kina has long been argued to be overvalued. However, when we compare the magnitude and time length of the effects of the resource boom and currency devaluation on PNG’s trade balance, we find that the latter exerts a much larger and longer impact than the former.

The resource sector shock only improves trade balance by four quarters, whereas a devaluation in the kina’s real exchange rate triggers an immediate and significant improvement in the trade balance for more than ten quarters (or two years). This result suggests that exchange rate adjustments (devaluation) are an effective and sustainable policy tool in managing trade balance adjustments, rather than relying solely on the expansion of resource projects which only improve the trade balance in the short-term. On the other hand, shocks in the non-resource sector and inflation are found to have a general positive impact on trade balance, but they are mostly statistically insignificant. 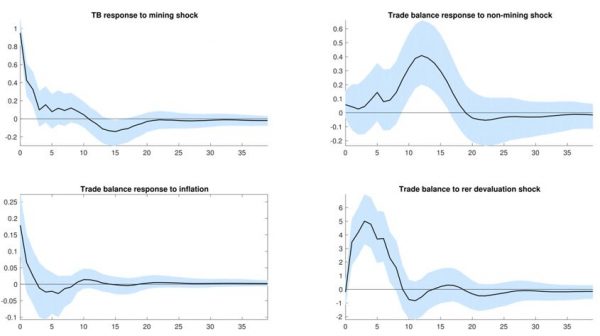 Then, we analysed the historical decomposition to determine the relative importance of each macroeconomic shock on PNG’s trade balance adjustments. The actual trade balance series is recovered if we sum up the contributions of all the shocks at any time (t). As presented in Figure 2, the historical decomposition of trade balance indicates that at a different point in time, all identified shocks except inflation contributed to the fluctuations of PNG’s trade balance with varying magnitude. This result is contrary to the popular belief of resource activity being the sole dominant factor in explaining PNG’s trade balance adjustments. For instance, the deterioration of the trade balance during the 2008-2010 global financial crisis is actually explained by shocks in the non-resource sector. The spill-over was transmitted through a rise in imports due to global food inflation and the onset of PNG LNG construction, while the contribution of resource sector shocks was negligibly small. 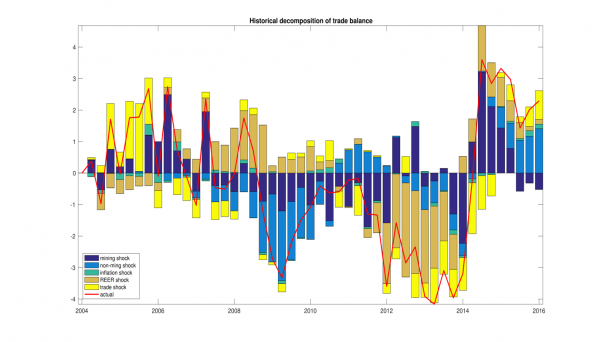 The historical decomposition of the trade balance from 2010 onwards paints a very interesting story. We found that the overvalued kina accounted for the largest contribution to the deterioration of PNG’s trade balance between 2012 and 2014 through a shortfall in exports as a result of reduced trade competitiveness. The value of the kina (documented to be overvalued by 20 per cent) elicits an adverse pass-through on the country’s total exports. While the commencement of PNG LNG exports improves the trade balance in the following period, our result shows that the impact of the resource boom is again very short-lived, consistent with Figure 1. The continued improvement in the trade balance in the later period was superseded by larger shocks which originated from the non-resource sector from 2015 onwards. Contrary to widely-heard expectations, we found that the broader surplus trend was actually driven by sharp import compression in the non-resource sector, mirroring the shortage of foreign reserves experienced by PNG.

From a policy perspective, our findings suggest that continued reliance on the resource sector cannot be considered a permanent remedy to the BoP shocks the country often experiences. The results indicate that a flexible kina exchange rate is critical for preventing the adverse effects associated with capital reversal and financial account deficits, especially around the time of resource project completion.

This blog is a summary of a recent Devpolicy discussion paper. Read the full paper here.

Bao Nguyen is a Lecturer at the Development Policy Centre, based at the University of Papua New Guinea, where he is a Visiting Lecturer as part of the ANU-UPNG partnership.