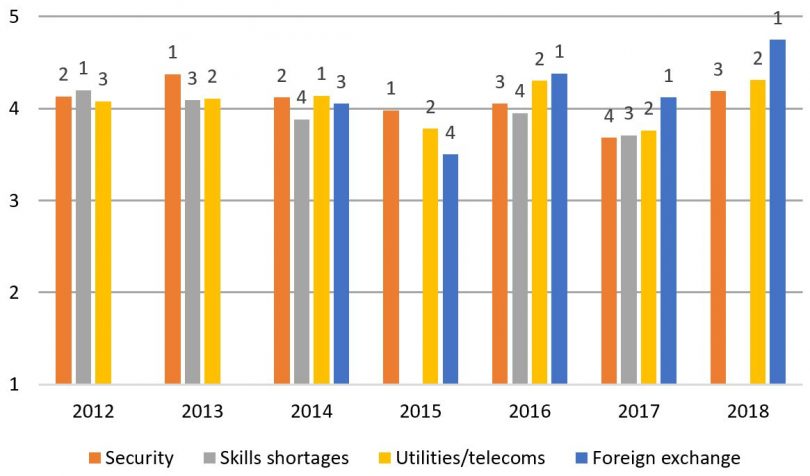 Every year since 2012, Business Advantage PNG has run a survey of PNG business executives. Called the “PNG 100 Survey”, it is a survey of “senior executives from a representative sample of Papua New Guinea’s largest companies, across all sectors of the economy.” While I am not in a position to judge the representativeness of the sample surveyed, the results are certainly illuminating. This article summarises the trends from these surveys, and draws out three lessons, with three graphs.

The figure below creates an index of performance against expectations. A value above zero indicates that, for a majority of businesses, performance exceeded expectations in the year shown. A value below zero indicates that a majority underperformed. We all know that the last few years have been a boom-bust roller-coaster, but what is interesting – and a good indicator of the severity of this business cycle – is just how many businesses have been surprised, first on the upside then on the down. In the boom years of 2011 and 2012, many businesses did better than expected. But from 2013 to 2016, businesses were surprised by the downturn in the economy, with underperformance against expectations especially in 2014 and 2015. It is only last year that performance and expectations were on average aligned. 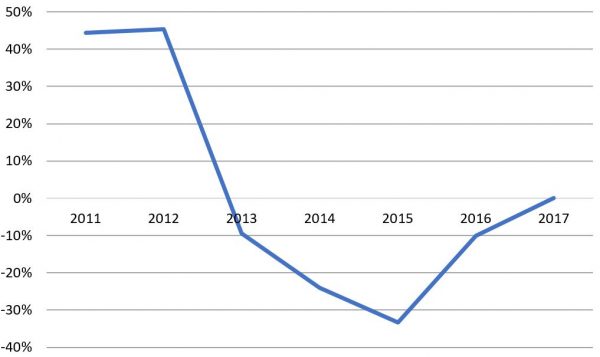 The index (which can range from -100% to +100%) subtracts the percentage of those who said performance was worse than expected from those who said it was better.

PNG businesses have expressed positive sentiment throughout the tough times. The second graph shows the expectations of businesses for the coming year in relation to investment, profits and employment. The index is positive every year, and often quite large, indicating that, every year, a majority of businesses were planning to do better, and invest and employ more in the coming year. In fact, we know this often hasn’t happened. For example, formal sector employment has in fact fallen every year since 2013. Whether PNG businesses really are as optimistic as they say, or whether they think they need to sound positive to bolster confidence, is one of those imponderables. 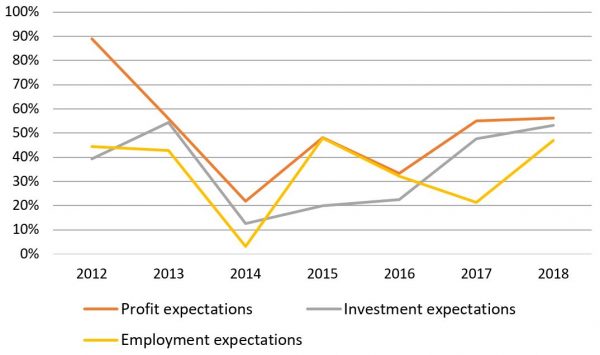 Every year, Business Advantage asks executives to list their firms’ top hindrances or constraints. Over the years, four constraints repeatedly appear at the top of the list: security, skills shortages, utilities/telecoms, and, more recently, foreign exchange. The figure below shows the average ratings these four constraints have received, on a scale of one to five. In 2012 and 2013, the top three constraints were security, skills shortages and utilities/telecoms. In 2014, foreign exchange joined the top four, in third place, and in 2015, it was in third place. But since 2016, foreign exchange has been the top constraint listed by businesses, and by an increasingly large margin. 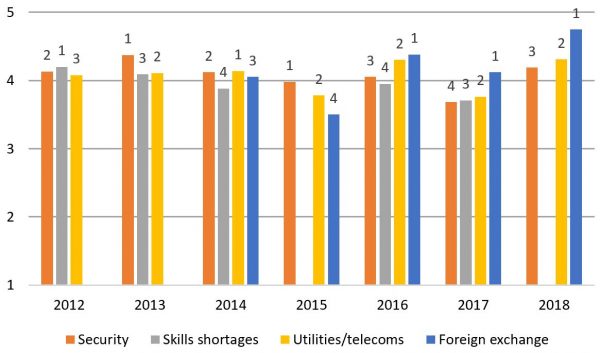 The numbers are the rankings (1=highest).

PNG’s foreign exchange woes are increasingly well known, but what is surprising is that they have continued for so long. This survey of business adds to the evidence that they are the prime culprit for the economic downturn (for example, falling employment levels). If businesses can’t import, they are not going to produce and employ. And if they can’t get their profits out, foreign investors are going to stay away.

The IMF put it well in its December 2017 report on PNG: “The main impediment to private sector development is macroeconomic policies. The main obstacle to business activity and investment are difficulties in obtaining foreign exchange.”

The government’s solution to foreign exchange (FX) shortages is to borrow in dollars; the Opposition’s policy is to run down foreign exchange reserves. But both are temporary and limited fixes that will quickly be exhausted. The exchange rate is now set by the Bank of PNG, and the nominal exchange rate has been virtually unchanged for over two years. The only real solution is a devaluation of the exchange rate. A devaluation would be neither painless nor a panacea, but there is simply no other way to resolve the foreign exchange crisis other than to try to wait it out. Again, the IMF has it right: “[We] recommend that the Kina be allowed to depreciate to eliminate the current over-valuation of the currency, end the FX shortage, and promote external competitiveness.”

It is quite remarkable that traditional business concerns such as security, skills shortages and infrastructure have been displaced by concerns around foreign exchange availability. How long will it be before the government bites the bullet, and devalues the exchange rate to address what has been for the last three years the number-one concern of PNG businesses?

This is extracted from the ANU-UPNG PNG 2018 economic survey, which was presented at the 2018 PNG Update on 14-15 June. Slides are available (under Plenary Session 1) and the draft paper is available here.

The Business Advantage surveys are available annually: 2018, 2017, 2016, 2015, 2014, 2013, 2012. The “performance v expectations” question is asked for the previous year, so the 2017 response in the first graph comes from the 2018 survey, and so on. The constraints question is posed as: “What are the impediments facing business right now?” Some years ask about telecoms in addition to a question about utilities. These two categories have been combined into one (by taking the highest value to either question). In 2018, Business Advantage uses a one-to-four scale to rate constraints; this has been converted via a linear transformation to a one-to-five scale, as used in other years.