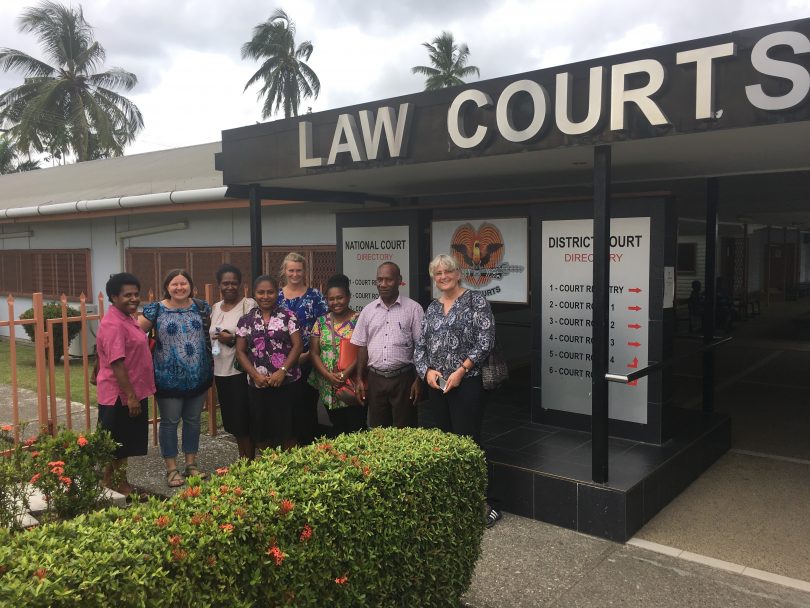 Over the past ten years, numerous Pacific island countries have amended their laws to address gender-based violence. This blog post looks at one aspect of Papua New Guinea’s (PNG) domestic violence legislation: family protection orders (also known as restraining orders or domestic violence orders). It draws on data from Femili PNG, a specialist family and sexual violence (FSV) service that has been assisting survivors of FSV since mid-2014.

The Family Protection Act also established a regime for issuing family protection orders. A family protection order is a legal intervention intended to reduce the risk of future harm by one family member who is considered to be a threat to another. Under the Act, a complainant may seek an interim protection order (IPO) from a District or Village Court, which, if issued, may then be converted into a longer-term protection order (PO) by a District Court. IPOs and POs offer the same level of protection and only vary in duration. IPOs last for 30 days and have an option to be renewed (once only) for a further 30 days. A PO, however, remains in force for the period specified in the Order, which can be up to two years (see the PNG Department of Justice and Attorney General’s Guidance Notes for the Family Protection Act 2013).

The Femili PNG data was taken from their Lae case management centre and spans from August 2014 to May 2018. The protection order data relates to applications lodged at the Lae District Court in Morobe Province. The data showed that 412 Femili PNG clients wanted an IPO during that time period. The majority were adults (97%), women (94%) and in their twenties or thirties (74%). The average age was 32 years, ranging from a baby to a 60 year old. A quarter of the 25 males were children or babies.

The data showed that of the 412 clients who indicated that they wanted an IPO, 389 lodged an application, 276 had an IPO issued to them and 162 had the IPO converted to a PO.

Figure 1: Numbers of clients who reached key stages of the process

From this we can see that the rate of attrition increased at each stage of the process. Of the 412 who wanted an IPO, a majority of clients (67%) had one issued and a minority of clients (39%) went on to have the IPO converted into a PO.

The main reasons recorded for not getting an IPO were that the client never returned or withdrew her/his application (30% of the clients who wanted an IPO). Similarly, there was no conversion to a PO primarily because the matter was struck out in court due to the non-appearance of the applicant or both parties (24.5% of clients who had an IPO issued) or because the client never returned or withdrew the application (13%).

Where the client withdrew an application or never came back, and a reason was recorded, the most common reason was the delay in the process. In 17 cases, a long delay was recorded due to factors such as no available magistrate, no IPO clerk, missing documents and multiple adjournments. Clients were noted as becoming tired or giving up because of the lengthy delays.

Other reasons recorded for withdrawals included changes in the husband’s behaviour or attitude, safety concerns, and/or repatriation of the client to her home village.

On average, it took 15.9 days from when an IPO application was lodged until the IPO was issued. Almost three-quarters of the IPOs were issued within a month of the application being lodged. Almost one fifth (18%) were issued on the same day, and around half (51%) were issued within a week. A small proportion took longer than 36 days (10.5%) with several taking more than four months. The trend line in the graph below shows that the time taken to obtain an IPO has been gradually decreasing over the past four years, but only very gradually and with lots of volatility. 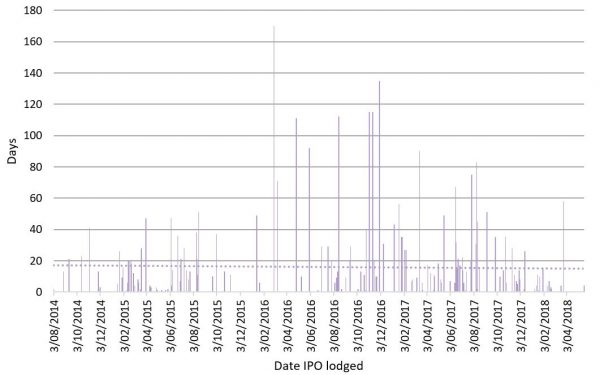 The average time between the issuing of an IPO to the conversion to a PO was 38.5 days. For more than half of the clients (59%) who obtained a PO, it took up to 29 days from when the IPO had been issued. For 13 percent of the clients, it took 71 days or longer, and a few took more than seven months.

Another finding from the data is that, compared with 2015 and 2016, more IPO applications were lodged in 2017 and there was a higher rate of IPOs issued (82%) and IPOs converted into POs (68%). The graph below shows the increasing number of Femili PNG clients who had IPOs issued from 2014 to 2018. 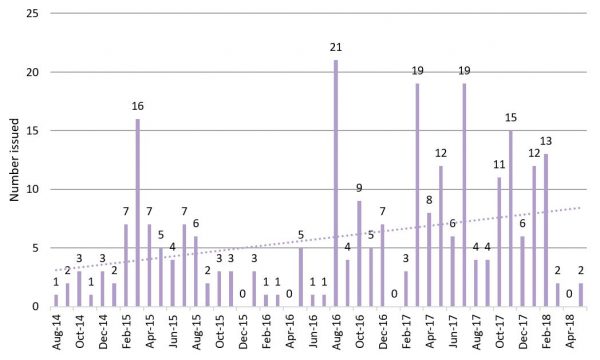 This analysis of Femili PNG’s client data is part of a pilot project that has examined the uptake and use of family protection orders in Lae more broadly. Based on interviews with key stakeholders, it is likely that the increase in IPO lodgements and improvements in timeliness and outcomes of the applications in 2017 are due to several factors, including changes in the District Court and in the practices of Femili PNG, especially the addition of in-house legal expertise.

This is the first analysis of IPO and PO data in PNG that we are aware of since the passing of the Family Protection Act. While many critical questions remain unanswered, such as whether family protection orders are effective in protecting women from further violence in PNG, the data has helped us to understand how long it takes to get an order in place, and has shown positive trends in the Lae District Court’s efficiency.

A report on the Femili PNG protection order data is available here.