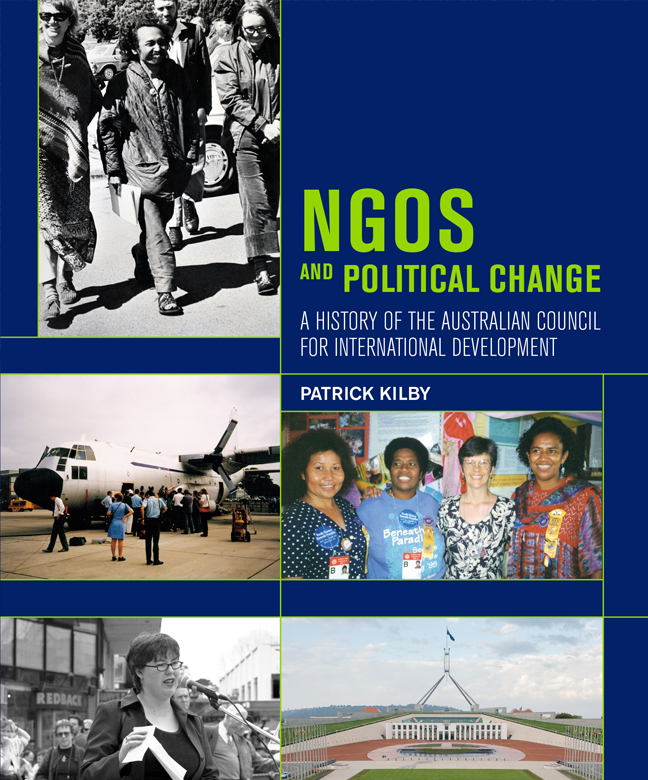 The challenges of coordinating NGOs and development actors are well documented. We see this nearly every time there is a disaster response—the influx of well-meaning NGOs, then the evaluation report critiquing their inability to work together effectively.

It’s no easier to get this right in a developed country context. Yet the peak body for Australian international development NGOs, the Australian Council for International Development (ACFID), is marking its 50th anniversary this year. It’s a remarkable achievement. While coordination among NGOs in Australia may still be imperfect, the persistence of a peak body has no doubt played a crucial role in improving legitimacy, coordination, government relations and development practice, despite criticism along the way.

ANU colleague and Devpolicy Associate Patrick Kilby’s new book, NGOs and Political Change: A history of the Australian Council for International Development, highlights ACFID’s achievements over 50 years, but does not downplay the challenges it has faced in first uniting, and then holding together, a diverse and continually expanding range of development actors.

For those of us who are newer to the Australian development scene, the history itself is fascinating (and not just for its glimpses into how NGOs ran fundraising campaigns before credit cards and the internet). The book not only documents ACFID’s formation, under the guidance of key figures such as Sir John Crawford, but the evolution of Australia’s NGO scene along with it. It charts ACFID’s development, from its efforts to encourage agencies to join in the 1960s, a youthful ACFID’s shift to the more ‘radical’ in the 1970s, a building of closer ties and funding relationships with the government in the 1980s, and its response to the growing scrutiny of NGOs and push for regulation throughout the 1990s and 2000s.

Not content to be a mere chronology, the book is an academic work with a political focus. It examines ACFID’s response to major global movements and firmly positions its work within the context of the wider shifts occurring around NGO practice over the past five decades, both in Australia and internationally.

Through several chapters, Kilby looks at ACFID’s response to particular areas of momentum. These include the shift from ‘development education’ to campaign-based advocacy; the increasing prominence of gender justice on the global stage; coordinated approaches to fundraising and large global campaigns such as Live Aid; and ACFID’s role in advocating and lobbying on human rights issues, such as those of sovereignty and self-determination.

Kilby also chronicles the challenges of domestic coordination, in particular how NGOs have worked with government using ACFID as a conduit, and how they have dealt with the ever-shifting priorities of those in power. He examines the history of engagement with AusAID, the ups and downs of NGO funding, and the establishment of the Australian NGO Cooperation Program (ANCP). He writes on ACFID’s agenda-setting work on creating a Code of Ethics, and later on the shift to sector-wide self-regulation through the Code of Conduct.

At a time when Australia’s aid budget is shrinking and public support is muted, it seems especially timely to reflect on the efforts that have been made in the past.

In some cases, past endeavours may be making a comeback: Kilby writes that ACFID’s 2015 strategy draws on some of the development education efforts that were a hallmark of its earlier years in an attempt to rebuild a constituency for aid.

In other areas, any return to the past seems highly unlikely: for example, the pooled fundraising that took place under ACFID’s International Disasters Emergency Committee (IDEC) during the 70s and 80s. While coordination in emergencies remains a crucial issue, it’s hard to imagine NGOs today ever agreeing to run large-scale fundraising campaigns with a shared kitty—the fundraising environment is now highly competitive, even though total donations have remained relatively flat for the past decade.

At the crux of the ACFID story are several key, and difficult to resolve, tensions that have underpinned NGO coordination and action from the peak body’s infancy to this very day.

First, the tension between competition and coordination among NGOs themselves. The book shows that it hasn’t always been easy to bring development NGOs together, with their differing world views, objectives, sizes and levels of resourcing. Balancing the priorities and views of members while presenting a sectoral voice is a challenge ACFID has grappled with for much of its history.

Second, the balancing act that comes from taking funding from government while attempting to be critical or influential on government policy. ACFID’s early history and work had a clear social justice focus, however the pressures of trying to engage with government, and the growing accountability culture for NGOs in receipt of government funds, has seen it shift focus to aid quality and attempt in some ways to take on the role of a sectoral self-regulator.

While the book has high praise for some of ACFID’s initiatives, for example, the development of the Code of Ethics and Code of Conduct, and its work on rights issues such as East Timor’s self-determination, there is some critique of ACFID members’ slow response in some areas, such as on recognising the growing global momentum on gender equality as a development priority, and on taking pre-emptive action against aid budget cuts.

While ACFID’s key role “as commentator, advocate, lobbyist, and networker has stood the test of time” (p. 25), in his final chapter, Kilby outlines some reservations about ACFID’s future direction, and that of NGOs more broadly. Among these are the ability to retain independence for NGOs while they engage more closely with government, and ensuring that NGOs don’t lose out as donors increasingly focus on cost-effectiveness. He also questions how ACFID members will operate in an environment where space for activism and the promotion of rights-based approaches to development has significantly narrowed, and what impact this might have on the work of their NGO partners in developing countries.

Ultimately though, he concludes that these challenges are not insurmountable, and that ACFID’s “Greek chorus” is “still in good voice, but perhaps with a subtler tune”.

NGOs and Political Change: A history of the Australian Council for International Development is available for purchase or download from ANU Press. A Canberra launch of the book will be held on Tuesday 22 September, 5.30pm, at the Drawing Room, University House, ANU.