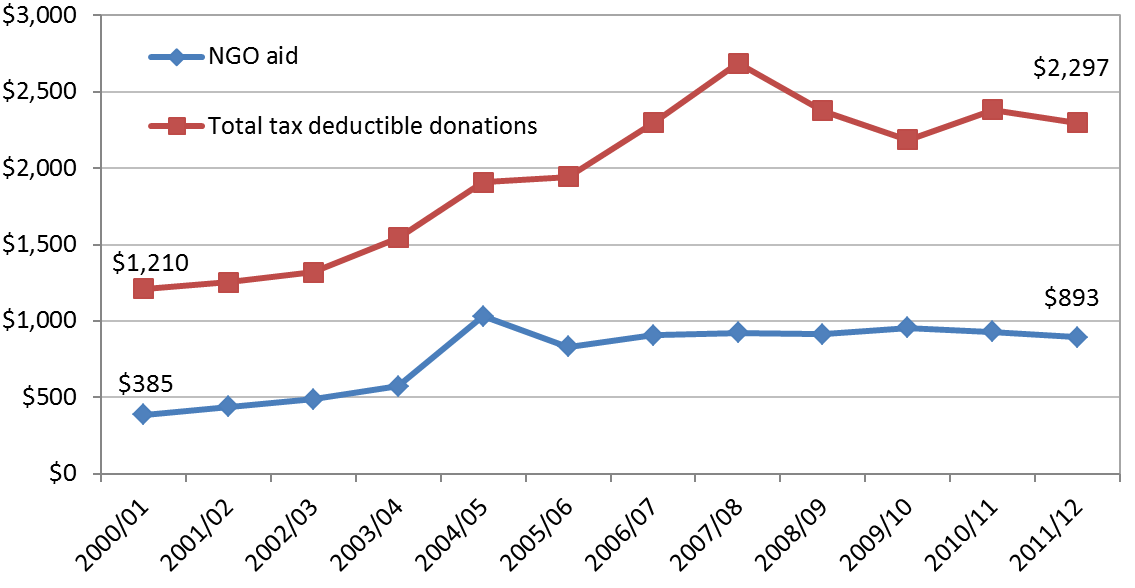 The last time we reviewed Australian public giving to international development NGOs, in 2013, we highlighted the scale-up in giving to development NGOs since the turn of the century. Two years on, the story looks a lot less encouraging. This post updates our analysis, which ended in 2011 (actually July 2010 to June 2011), with data from 2012 and 2013.

We focus only on donations to NGOs, including bequests and both monetary and in-kind donations but excluding government and other official and overseas support. As before, our data is from the peak body ACFID, and the annual reports of the two largest non-ACFID member development NGOs: Compassion and MSF, respectively the second and third largest development fund-raisers in Australia.

Figure 1 tells the story. The good news is that, even after inflation, donations are much higher than they were in 2000: 140% higher to be precise. The bad news is that all of that increase was locked in by 2005. About two-thirds of the massive boost to giving that the Boxing Day Tsunami generated in 2005 was still intact by 2007. Since then donations have only kept up with inflation.

The growth over the decade wasn’t just about the Boxing Day Tsunami. Look at the growth before 2004. Donations to development NGOs grew by 49% in real terms between 2000 and 2004, but hardly at all since 2006.

Economic growth has continued to be strong. Total household income after tax has grown by more than a third in real terms since 2005. But while we are getting richer, we’re not sharing it around. We now give to the overseas poor only nine cents for every $100 we have after tax, down from 14 cents at the height of our generosity (in response to the 2004 tsunami) and 11 cents in 2007. 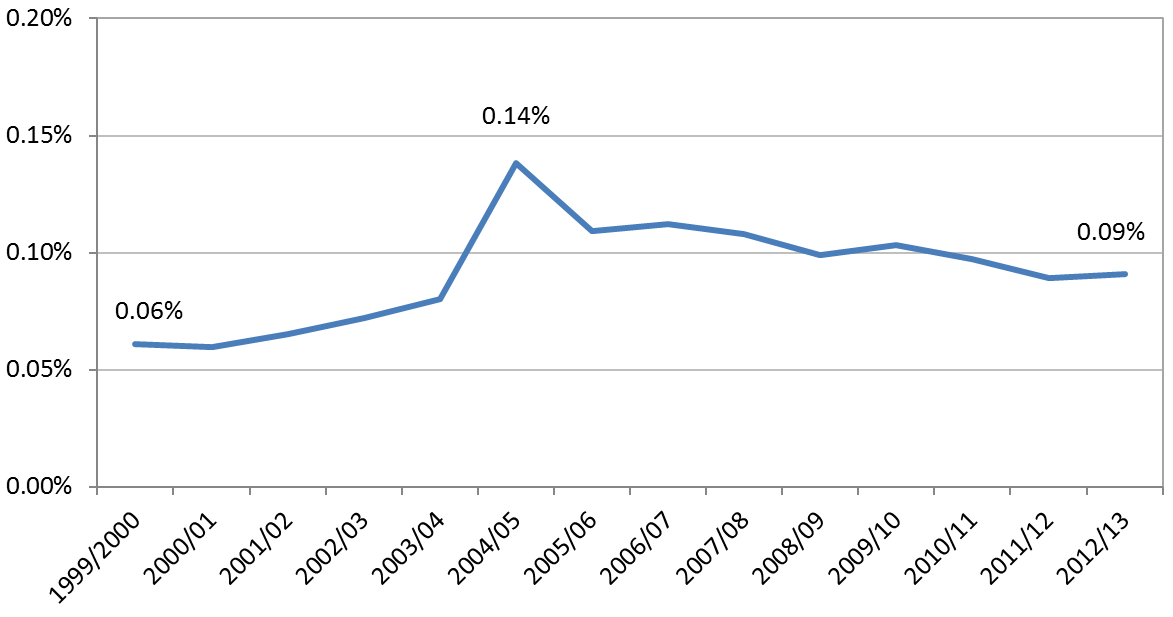 Are Australians adhering to the maxim that charity begins at home? Figure 4 compares development NGO donations with the growth in total tax-deductible donations from individual Australian taxpayers between 2001 and 2012 (the latest available year). The same flatlining is evident in respect of total (tax-deductible) giving, though it starts slightly later. We are becoming less generous at home as well as abroad.

In summary, Australian trends in giving to development NGOs, though still respectable over the period of the last fifteen years as a whole, look decidedly worrying for the post-2005 period. Compassion fatigue seems to have set in.

Notes: For 2012/13 ACFID included far more NGOs in their non-ACFID member calculations than they have in earlier years. For comparability with earlier years, we have only included Compassion and MSF in our non-ACFID development NGO category, plus a small margin based on the dominant share (95%+) of these two NGOs in earlier ACFID annual reports. The 2014 ACFID Annual Report also misreported World Vision’s total contributions. We have used the correct figure. All years end in June. Both series in Figure 2 and Figure 4 have been adjusted using the same CPI deflator.

Jonathan Pryke is a Research Officer, and Stephen Howes is the Director, of the Development Policy Centre.