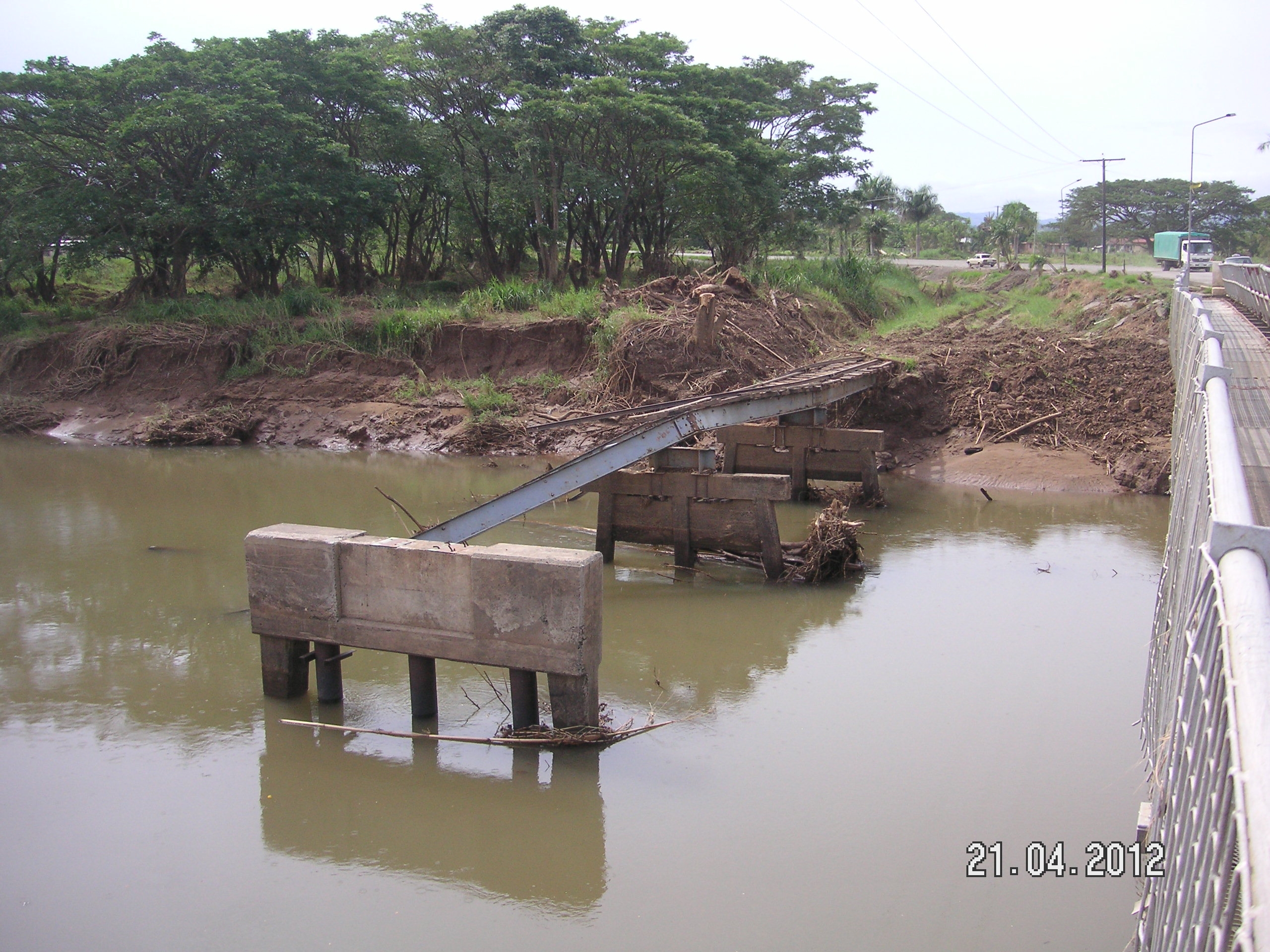 A tramline bridge bruised and battered by the April floods

On a Friday afternoon a few weeks ago, I was sitting on the 5th floor of ANZ House in Suva chatting away with a friend on many issues of common interest to us.  This was another of my regular visits home to meet family and share kava with my many friends who live there.

The entire floor shook while a shudder passed through the whole building.  We both went quiet momentarily. Even the TV on the wall that was busy broadcasting the athletics competition underway at the National Sports Stadium went silent.

After a short pause, I looked at my friend and asked if this was an earthquake.  He nodded.  I looked at my watch which stated 2:47pm.  We were asked to evacuate the building soon afterwards.  Surprisingly, the workers all walked calmly down the stairs, in an orderly fashion.  Everyone moved to the back of the building as instructed.  The newspapers the next day reported of a 4.6 magnitude earthquake 7 kilometres from the city. 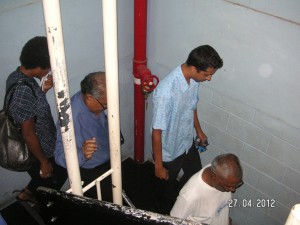 Workers moving down the stairs of the ANZ building

Natural disasters are no strangers to Fiji.  And they have been particularly frequent the last four months of 2012.  While the spirits of many badly affected by the recent floods are down, nearly everyone I met was busy rebuilding.

Floods in January and then again in April have caused extensive damage to infrastructure and crops.  During my stay in Fiji, residents of Ba and Nadi towns were both busy cleaning up their muddied streets and shops.  Banners displaying ‘Flood Sale’ were seen in Ba, Lautoka and Nadi as merchants did their best to recoup whatever they could from the spoilt merchandise.  There was a stench of mud and decaying organic matter in Nadi town.  The declaration of a state of natural disaster remained in the Western Half of Viti Levu to the end of April.

THE United Nations Office for Coordination of Humanitarian Affairs (OCHA) has estimated that the April flood has cost the nation F$71.3 (AU$39) million.  Just this one disaster alone has cost the economy 1.5 percent of GDP.  Another of a similar magnitude will wipe off all of the growth projections of the year of 2.3 percent provided by the Reserve Bank of Fiji.

Evidence of damage done to infrastructure by the recent disaster is present everywhere.  According to OHCA, the road and rail infrastructure has sustained the largest damage (of $17,951,438), followed by agriculture (estimated at $17,416,693).  Roads are ridden with potholes while portions of the Nadi-Suva Highway have returned from being sealed to their former gravel/dust status of the 1970s. 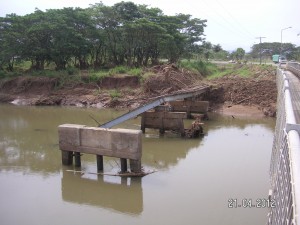 A tramline bridge bruised and battered by the April floods

Poverty has increased as a result of the floods. I met many relatives who were down with flue and diarrhoea.  Three widows, all related to me, were struggling to keep a roof over their heads (literally).  There has been a hollowing out of able bodied men from the Indo-Fijian community, so the muscle for cleanup in many rural communities is scarce.  Leptospirosis had already claimed six lives.  The radios were blaring messages to the public to see a doctor early when sick and to boil drinking water.

Life, however, chugs along.  Fijians are surprisingly resilient to natural disasters.  Communities spared the effects of the floods were busy helping those less fortunate.  Two of my own families were staying with others while their homes were being cleared of the debris left behind the last flood.  One had saved nothing and was particularly distraught as they had lost nearly everything in January as well.  They will, for sure, bounce back but it will be tough. 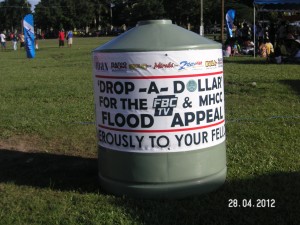 The ton of dollar-coins in a tank

Festivities and football continue in Fiji regardless of the circumstance.  And it is the worst of times that brings the best in Fijians.  Albert Park (in Suva) the very next morning after the earthquake was full of families feasting while cheering for their rugby teams.  The event was organised to raise funds for the victims of the recent flood. A chest high water tank sat at one end of the park with a ton of one-dollar coins.

So what can be done to reduce the risks of further flood damage?

Families flooded are as much the victims of policy failure as they are of a natural disaster.  Those living adjacent to the Nadi-Suva Highway just outside Nadi town comprise many displaced sugarcane farmers.  Some of them were rescued from the roofs of their homes at the height of the floods.  I was told that they moved close to town as it was the only means to securing jobs and thus income to sustain their families.  They built there only because this was the only land available within the vicinity of the town.

Policymakers have been exercising their minds on how best to reduce the risks of a recurrence of the recent disaster.  Proposals are being considered to build better drains and to dredg the Ba, Nadi, and Sigatoka Rivers.  These are sensible proposals.

More may still have to be done.  In particular, improving access to land on higher ground close to places of employment is an option that deserves immediate consideration.  Furthermore, regulations restricting building in flood prone areas and any construction likely to block the flow of flood waters may also have to be designed.  And last, income earning opportunities need a revamp if increasing rates of poverty are to be reversed.

Satish Chand is Professor of Finance at the University of New South Wales and a Research Associate with the Development Policy Centre.