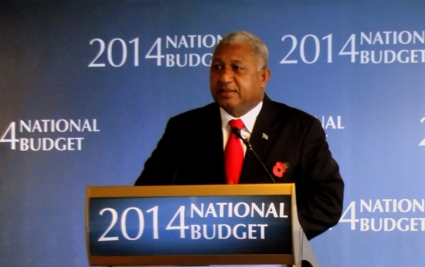 The formulation of any budget is a central political process. Governments often try to find a balance between political objectives and economic objectives. It is obvious that Fiji’s 2014 budget continues with the expansionary fiscal policy that it adopted in its 2012 and 2013 budgets. The 2014 budget strongly reflects political objectives; government has tried to appeal to ordinary citizens by demonstrating its ability to provide social services. As a result there has been significant attention on education and health. This is not surprising as Prime Minister Bainimarama has already indicated that he will form a political party and contest the General Election scheduled to be held next year.

However, when analysed from a purely economic objective, the budget raises serious questions about the sustainability of some of the expenditure measures that have been announced, such those relating to fee-free education and tertiary education sector loan schemes. These policies by themselves are laudable and innovative, but they will need to be sustained in the future.

The total revenue forecast for 2014 is $2.7 billion against an expenditure of $2.8 billion. The shortfall for 2014 will be made up by selling government assets to realize $478 million in revenue. The revenue forecast is highly dependent on the revised GDP growth forecast for this year and 2014 forecast of 3%. GDP is now forecasted to grow by 3.6% in 2013. This has been revised upward from 3.2% announced by the Macroeconomic Policy Committee in August this year. Thus the $2.7 billion revenue forecast behind a highly optimistic GDP forecast provides a bold target. The sale of government assets to finance recurrent expenditure is not necessarily prudent financial management. Normally, the principle behind sale of asset is that it is used to retire debt and not fund recurrent expenditure. The forecasted deficit of 1.9% also seems optimistic given the expenditure outlays in the budget.

One of the positive aspects of the last three budgets has been the change in the mixture of expenditure. The capital expenditure in 2014 represents about 36 % of total expenditure as compared to around 20-25 % in previous years. Since 1987 Fiji’s infrastructure deficit has been increasing. The government’s emphasis on fixing the roads for example is commendable and it is likely to support better economic growth in the future.

However, there is concern that government may not have the capacity to manage efficiently the significant rise in the allocation for capital expenditure. For example, the Fiji Roads Authority will be provided with a budget of $454.7 million to continue with the road works program that began last year. This represents an increase in capital spending of around $60 million from last year and would go a long way to address the infrastructure deficit of the last several decades. The allocations for last year and this year will now add up to more than $800 million. The government should provide more details about where the money will be spent, and on which roads. As it is, the Hibiscus highway and Dreketi to Nabouwalu highway are funded by the Exim Bank of China. Thus the $454 million is a substantial sum and it is unclear where exactly the funds will utilised.

At a macroeconomic level, GDP growth forecasts of 3.6% are optimistic and are driven by consumption expenditure arising out the reduction in income tax announced in the 2012 budget. However, as indicated in the supplement to the 2014 budget address, this buoyant growth is likely to be temporary. Growth forecasts for 2015 and 2016 are only 2.4%. This suggests that it would be difficult for the government to contain its deficit forecast of 1.5 and 1.0% of GDP in 2015 and 2016, given that revenue forecasts will be difficult to achieve.

One contentious issue has been the level of investment in the economy. It is very difficult to get a proper handle on the amount of total investment and the different components of total investment. In 2013 the total investment is expected to be around 28% of GDP, which represents a significant increase from 18% in 2012. It is also forecast that private investment has increased from a very low 3 to 4% of GDP a few years ago to 13% in 2013. It is important to note that given the projected level of total investment in 2013 is 28%, then it would be reasonable to assume that growth should be around 5% of GDP as opposed to 3.6% forecasted for 2013. This means that the quality of investment (most of it is public investment) is not good enough to generate the commensurate levels of GDP growth. The figures on foreign investment provided in Table 8.1 in the Fiscal Update show that while the number of investments, and value of that investment, increased substantially in 2012, it is still very low. Although the government has continued to reform its investment policies to make foreign investment approvals more efficient and effective, it still has a long way to go to reduce the time and costs of facilitating investment, both foreign and domestic.

Poverty Benefit Scheme (PBS) will receive an allocation of $22 million. This should provide some relief to very poor households. Social policies such as PBS are important as they provide a safety net system for the very poor in society. The rise in poverty over the last decade and loss of real household welfare through higher cost of living has increased the demand for social safety nets. Nonetheless, the 2014 budget contains very few measures to reduce the high cost of living. In particular, duty /tariffs need to be re-considered on several items. While the salary increase for civil servants will uplift hundreds of families from the poverty line, those in the private sector will be left out.

Ten million dollars has been provided for a new program that will give married couples support for building or buying their first home. It is, however, unclear whether this support will be provided through the Housing Authority or commercial banks. It is therefore important to find out how this program will be rolled out as well as other finer details.

The final issue with this year’s budget is that the government will struggle to implement the new policies and spend the funds allocated in a timely manner. Civil service reform has been on the agenda of the Bainimarama government for a while and there are improvements in the delivery of certain ministries. However, overall the civil service is still riddled with inefficiency and ineffectiveness. The militarization of the civil service continues and this has meant that appointments, promotions, retirements and rehiring continue to be based on race and other considerations. The government ought to do a serious analysis of the civil service and ensure that a culture of meritocracy is established in the civil service.

Neelesh Gounder is Senior Lecturer in economics and Deputy Head of School (Research), School of Accounting Finance and Economics at the University of the South Pacific, Suva. He is also a centre associate with the Development Policy Centre.