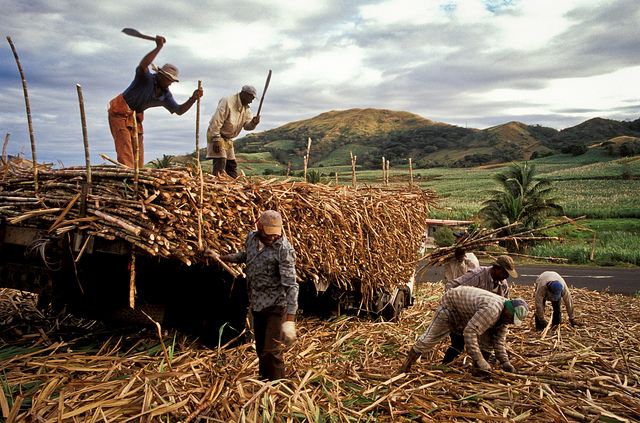 Speakers at the Pacific Update conference last week painted a rosy picture of the Fijian economy, with 2016 expected to be its seventh consecutive year of economic growth. This marks a reversal of fortunes for the regional hub. Following the 2006 coup, Fiji’s economy was in the doldrums. There was uncertainty regarding the future of agriculture in Fiji and the sugar sector in particular. Tourism had been damaged by political instability. There were concerns about the country’s foreign reserves. Private investment had collapsed. The economy was effectively kept on life support by the government during these years, with public expenditure supporting what meagre growth there was, along with the devaluation of the Fiji Dollar in 2009. The upsurge in economic growth and private sector since 2010 shows that Fiji has well and truly left that period behind. What is more, the continuation of high levels of private sector investment (Figure 1) – first seen in 2014 – point to an economic resurgence. That investment is a positive sign of times to come (see Rup Singh’s forward estimates here [ppt]). 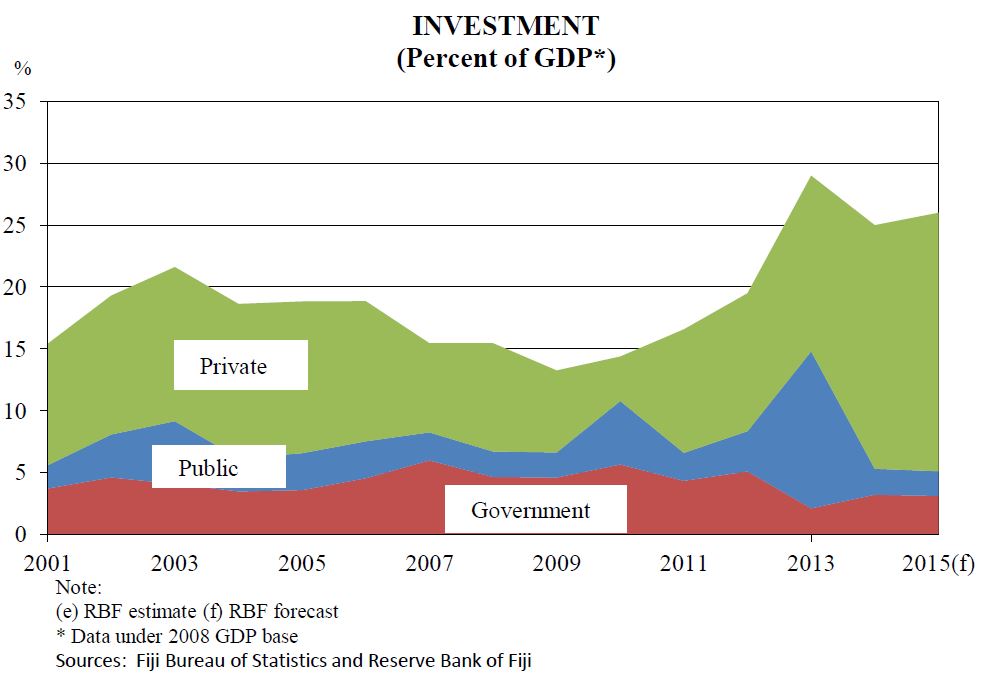 Source: The Fiji Economy Chartbook and Statistical Index, May 2016, p.3

GDP growth for the year is forecast to measure 2.4 percent (see Figure 2), notwithstanding the devastating cyclone earlier in the year. Tropical Cyclone Winston did not leave the Fiji economy unscathed, of course. The disaster is estimated to have caused damage valued at F$2.85 billion, equal to almost 30 percent of GDP. Forecasts of GDP growth in 2016 have declined as a result, from 3.5 percent to 2.4 percent. The April floods have also taken an economic toll. While these events had a devastating impact on the affected communities, and have adversely affected the agricultural sector, the impact on other economic sectors was less pronounced. The Suva-Nausori corridor, Fiji’s economic hub, was spared from the worst of the cyclone. So too was the tourism sector, Fiji’s most important source of foreign exchange. The tourism hub of Nadi/Denarau, as well as the Mamanuca islands and the Coral Coast, were not severely affected. Tourism arrivals have reached new highs in the last year. At the same time remittances from overseas, which constitute Fiji’s second most important source of foreign exchange, have served as a recovery mechanism, with an upsurge in remittance flows to affected areas. Inflation has picked up as a result of reconstruction activities, reaching 5.6 percent in May, but this is expected to be only temporary. 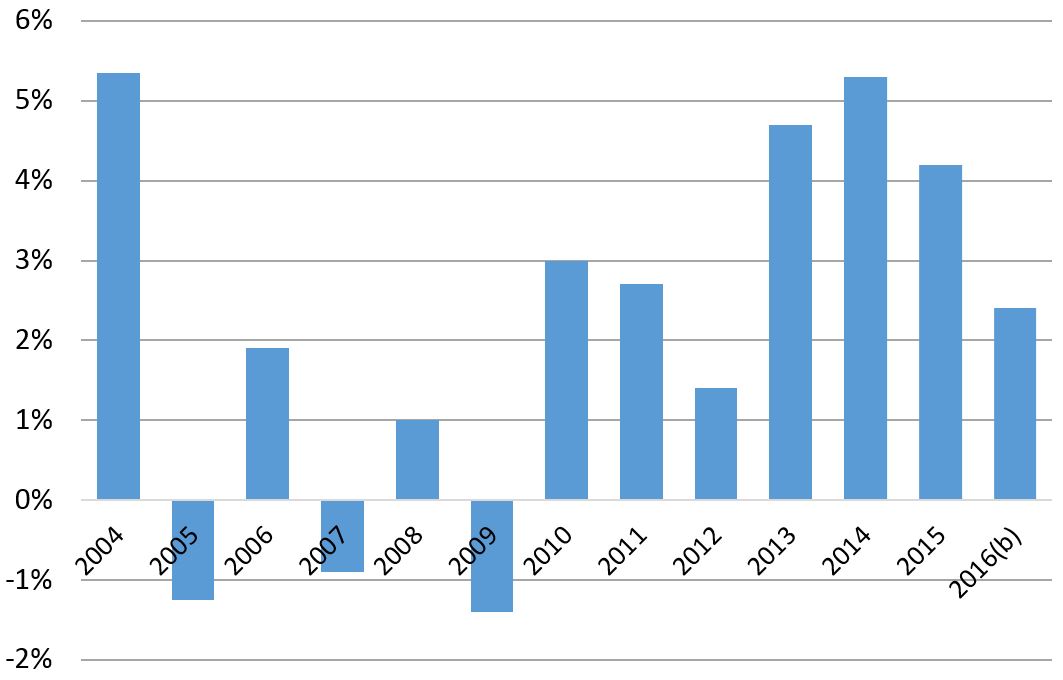 The 2016-17 budget released in June includes few significant policy changes. (Owing to a decision to change the fiscal year from Jan-Dec to July-June, the budget comes just six months after the 2016 budget – a timely update, given the impact of Tropical Cyclone Winston in February.) There are some worthwhile initiatives, such as the 300 percent tax deduction on wages of disabled persons employed for a period of three years, which is available to employers and designed to promote employment opportunities among that group. Another worthwhile initiative is the tax increase on sugar-sweetened drinks, which will help Fiji to reduce the incidence of non-communicable diseases. The water resources tax – levied on companies such as Fiji Water – has also increased.

More significant reforms announced previously remain in place. These include the 2016 budget’s decrease in the value added tax (VAT) rate, as well as its application to ‘essential’ goods that had previously been excluded – a move that was criticised by welfare groups for being regressive (and which the shadow minister for finance labelled ‘confused’, given the Bainimarama government increased the VAT in 2011). The 2016 budget’s increase in the environment levy and turnover tax – which drew complaints from the tourism industry, owing to the absence of consultation – remain in place in the 2016-17 budget.

The government had previously put in place temporary measures to respond to Cyclone Winston, such as partial withdrawal of savings from the Fiji National Provident Fund (FNPF) and the “Help for Homes” initiative. These policies have helped to boost the construction sector in 2016, as has the emergency response from development partners.

What of government spending? Government expenditure will rise to F$3,643 million, with the deficit in 2016-17 budgeted at $468 million, or 4.7 percent of GDP. It is worth noting that $200 million of this spending relates to the response to Winston. The deficit of 4.7 percent also factors in one-off sales of government assets – a practice that hides the more meaningful underlying deficit. If those sales are removed, the deficit climbs to 7.3 percent, or if the response to Winston is excluded, 5.3 percent. The significant borrowing requirement is likely to put pressure on the finance ministry in the short-term, and there are unconfirmed reports of cash flow problems. The 5.3 percent underlying deficit (which excludes the response to Winston) is also high in a country where the economy is set to record its seventh consecutive year of economic growth. However, it is being recorded within a context where debt is very manageable given good economic growth and private sector investment. Risk associated with increased debt is therefore not as high as in previous years.

It is worth noting that a significant component of government spending is capital expenditure which, if spent effectively, is likely to increase productivity and future growth. The Fiji Roads Authority (FRA) once again will receive the highest allocation in the budget, at F$527 million (almost 15 percent of the entire budget) – a striking allocation for an agency that sits outside of core civil service structures. There is evidence that the condition of roads around the country are improving as a result of years of funding FRA activities; however, auditing of the efficiency of expenditure could be better. The government’s efforts to silence criticism from the Public Accounts Committee – through changes to parliamentary standing orders that ensure a government MP is chair of the committee – will not help in this regard.

There are a number of economic risks and challenges that face the government. Perhaps the greatest risk for the economy is a return to political instability. This seems a remote possibility in the short-term, but decision-making in the Bainimarama/Sayed-Khaiyum government is highly centralised, which carries risks. Another economic risk relates to Fiji’s dependence on tourism. The economy would be adversely affected should the sector be hit by an external shock (or a disaster that more directly hit tourism areas). The greatest challenge for the government is in agriculture. The fall in the price that Fiji receives for its sugar will adversely affect the agricultural sector in the years ahead. Successive Fijian governments have been unable to significantly reform the sugar industry, and although agriculture’s importance to the economy has declined, the loss of preferential prices for sugar from the EU is affecting the livelihoods of a very large number of farmers. This represents an ongoing social challenge for government.

Notwithstanding these challenges and risks, the Fiji economy is in a good position. Confidence has returned following years of uncertainty that resulted from the 2006 coup. Levels of private sector investment not seen for decades point to an economic resurgence. Fiji has a lot to look forward to in the coming years.