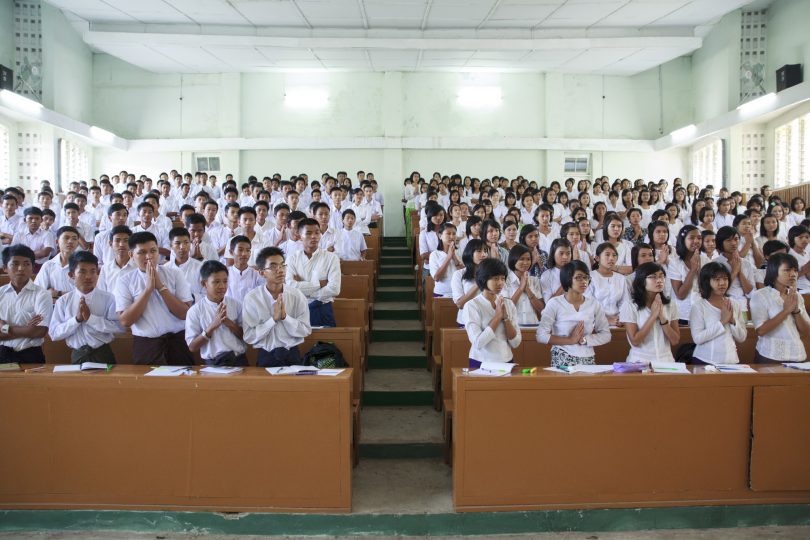 There’s a scene in a lot of movies where the hero, having fumbled her way along an impenetrable wall, suddenly touches the block with the hidden spring, and the mass of masonry swiftly pivots, leaving the hero on the inside, and with the path to all the secrets opening before her.

It’s a scene that will resonate strongly with anyone who has toiled to learn a language, but particularly among development workers in the community where it is spoken. After much stumbling through grammatical errors, elusive pronunciation and baffling syntax, you manage to get a key piece of conversation just right – pronounced smoothly, pitch and accompanying body language spot on. Suddenly, your position is transformed – your interlocutors are no longer screwing up their faces with the effort of understanding you, but treat you as a normal part of things. The path to fluency still twists and turns, but for the first time the goal seems achievable, and you are not condemned to be forever an awkward oddity in the community you’re trying to fit into.

For close to six years now, I’ve been managing overseas volunteer programs, sending and supporting Australians in locations across the Pacific, Asia and Africa. Research shows that there is a peculiar X-factor in a volunteer placement; that is: that a skilled volunteer assigned to work within a local organisation will often have an impact that goes beyond what is usually expected.

Insofar as it has been possible to nail what makes it work, the effect seems to lie in the nature of the relationship – the volunteer coming in explicitly as peer rather than ‘expert’; as ready to learn as to instruct; and fitting into the existing workplace structure, rather than floating above it.

This is probably demonstrated nowhere more forcefully than in language acquisition, even where (or especially where) the volunteer’s work can be successfully conducted in English, with or without interpreting. Readiness to learn the local language is a clear demonstration of respect for local culture and relationships, and also shows readiness to be vulnerable, and occasionally even humiliated.

After several years managing programs in Laos from a distance, I finally got some study leave to learn the language, and holed up in the small provincial town from which most of our programs were run. There’s not exactly an established industry of teaching Lao as a second language; at that stage, there wasn’t even a comprehensive Lao-English dictionary. My teacher, the abbot at the main pagoda of the town, used the standard third-grade reader as our main textbook. A semi-circle of young novices would often surround me as I laboured through morning lessons, brown fingers shooting out of orange robes to point out my many errors, with soft exclamations of “Bo teuk” (not correct). When the town’s dignitaries came to plan a major ceremony with the abbot, I was stumbling my way through the story of The Little Fish who Didn’t Listen to his Mother (he got cooked and eaten), and they surrounded me in smiling silence until I’d agonised my way to the end. Any chance of playing White Colonial Expert after that was as dead as dust.

It’s a truism that language encodes culture, and even if you never achieve the level of vocabulary and fluency of a 5-year-old native speaker, the process of learning will provide illumination in all kinds of unexpected quarters. In most rice-growing cultures, the words to designate the crop in the field; the harvested but unthreshed grain; the milled grain bought in the market; and cooked rice on the table, are totally different. Using one in the proper place of the other will result in blank looks of incomprehension. In English, we use different registers of language according to the formality and distance of the relationship and the situation; but in Javanese the whole vocabulary and even syntax with which one addresses close friends, superiors, older relatives, or surviving royalty comes close to constituting a separate language. Knowing any of these will significantly shift the way you perceive and interact with your host culture, and affect your hosts’ perceptions of you.

Not all the gains take years of toil. Backpacking my way around Greece at the age of 18, I walked into a mountain village where I was planning to hole up for a couple of weeks to swot through my grammar book. With my very limited language, I managed to explain what I wanted to the proprietor of the main café on the square. She stepped to the door to hail her friend who rented out rooms next door:

Somehow, that said it all.

Mark Deasey has worked in the field of international development and humanitarian relief for over thirty years. Mark currently works with AVI as the Executive Manager – Programs.

Mark has worked in the field of international development and humanitarian relief for over thirty years, gaining extensive overseas experience both as a volunteer and salaried staff. He worked in Lebanon in the early 1980s during the country’s civil war; Cambodia from 1988 to 1992; and Indonesia from 2007 to 2010.

Mark has been with AVI for five years, holding several management roles before taking on the Executive Manager - Programs role in February 2016.

Prior to joining AVI, Mark was with Oxfam Australia for 14 years. He has also worked as an independent consultant in the fields of program design, evaluation and strategic planning.