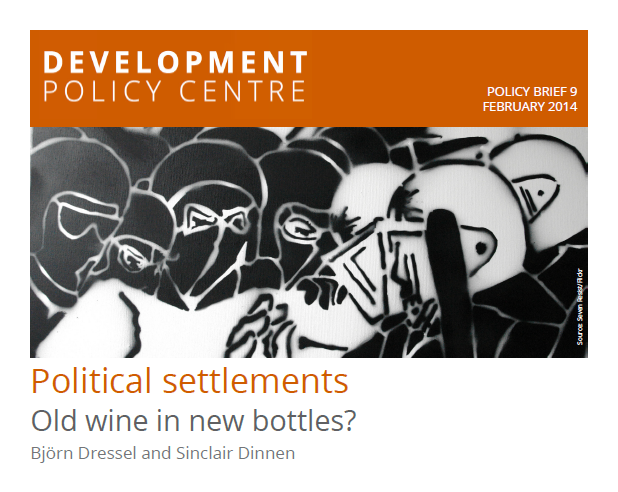 The concept of political settlements has gained considerable traction in development circles in recent years (see here, here and here), although still more as a subject for discussion and debate among scholars and practitioners than as something that is routinely influencing donor interventions. As highlighted in a separate policy brief, we believe that while the concept holds considerable potential, several aspects deserve more careful attention before it can be truly useful in development practice.

The four points that we consider to be critical are these:

1. Conceptual confusion: Given the divergent discussions of the concept across various disciplines and the conceptual stretching that is taking place, it is no wonder that there is confusion over definition and meaning. In fact, as underscored by the ever-widening definitions, the concept has gradually moved away from its earlier application to economic institutions and growth outcomes to such new areas as peace and stability. Often driven by development actors in search of solutions to practical development problems, rather than by academics, the process has taken place with less critical reflection or substantial conceptual work than is needed. The result is an increasingly elusive concept without clear parameters. For instance, few authors have so far critically engaged with important differences between political settlements (as long-lasting elite arrangements) and more short-term-oriented elite bargains (that by nature are prone to readjustment and change) or thought about how to operationalise the relationship between these two. Particularly problematic has been the emphasis on ‘inclusiveness’ as a critical dimension of political settlements, despite little thorough investigation about who needs to be included and what the effects will be for peace and economic development. Indeed, as the few empirical studies make clear, both aspects do not necessarily go hand in hand: elite inclusion might even produce ‘unproductive peace’ because in accommodating wide-ranging elite interests, productive activity is replaced with rent structures that support the elite coalition. In short, if the political settlement concept is to be analytically useful, it must be clearer and more rigorous.

2. Elite focus: Discussions about political settlement have centred on the role of elites as the key determinant of whether settlements are conducive to inclusive, equitable, and durable peace and development. Drawing upon the experiences of established Western states and emergent powers of North and South Asia that have more recently achieved impressive rates of economic growth and political stability, the literature assumes the existence of sizeable and relatively coherent political and economic elites as a fundamental condition for positive transformative change. Yet, while these assumptions may be valid in relation to the unique historical experiences in the countries concerned, in other countries such assumptions are more difficult to substantiate. The latter would include the small nations of Pacific Melanesia, where processes of state formation and consolidation are still at a relatively early stage and political and economic elites are not only few in number, but also subject to high rates of turnover. Alternate sources of power and authority in the informal/customary domain sometimes overlap with more formal elites, sometimes operate separately from them and are sometimes in direct competition with them. Although the political settlement lens allows us to capture informal dynamics, the term ‘elite’, as currently treated in the literature, travels only with difficulty to such places. For instance, while resource-driven economic growth in a country like Papua New Guinea (PNG) is contributing to class formation and larger and more cohesive elites (the middle class), in the neighbouring Solomon Islands economic conditions seem less conducive to similar developments. The focus on elites needs to recognise that very different country contexts require a very different understanding of what an elite is. Moreover, in focusing almost exclusively on elites, the concept tends to deny non-elites – often glossed over as passive followers – any of the agency it actively seeks to invest in the former. At the same time, agency on the part of non-elites in countries like PNG and Solomon Islands appears to be an important factor in explaining the ephemeral character of local political elites, with 50% and upwards of incumbent members losing their seats at every election.

3. Contextualisation and extension: There is also the risk of applying a template like approach to political settlement without greater contextualisation or accommodation of local variables. For instance, the development of that framework (particularly through the recent contribution of Dan Slater) is largely based on the experience of Southeast Asian ‘leviathans’ (as Slater calls them), whose social, political and economic histories, as well as their geographies and population sizes, diverge markedly from experiences in other parts of the world. Such divergence limits the utility of the political settlements concept without substantial adaptation to local circumstances. The political settlement framework also needs to be extended to other factors as well, such as the recognition that ideology, ideas and discourse can be a transformative force in animating elite behaviour and policy outcomes in the first place. Furthermore, transnational factors need to be acknowledged, such as policy diffusion and institutional mimicry, or how aid is contributing negatively to elite incentives in many developing countries. Such a broader understanding will allow us to think about power dynamics in a more refined and differentiated way.

4. Lack of empirical work: Finally, and perhaps most worrisome, is that so far the considerable uptake of the political settlement concept in the development community has not been matched by rigorous empirical work. Indeed, most existing works have been conceptual in nature, with individual country experiences used simply as illustration. As a result, it is not at all clear how the concept could be operationalised in practice; there have been no effective attempts to rigorously test the concept and whether it has explanatory power. What is obviously still needed is a thorough empirical research agenda on the political settlement concept from a variety of methodological and disciplinary perspectives.

In short, though the political settlement concept offers great potential, its current unconditional embrace by the development community may not be wise. In its current state, the concept suffers from a lack of clarity, is both too narrowly focused (on elites) and over-extended, and, most important of all, lacks an empirical basis. More work, theoretical and empirical, is needed to more accurately delineate its full potential. It is our hope that this blog post will stimulate further research and debate on this promising topic.

Björn Dressel is a Senior Lecturer at the Crawford School of Public Policy, ANU. Sinclair Dinnen is a Senior Fellow at the State, Society & Governance in Melanesia Program (SSGM), ANU.