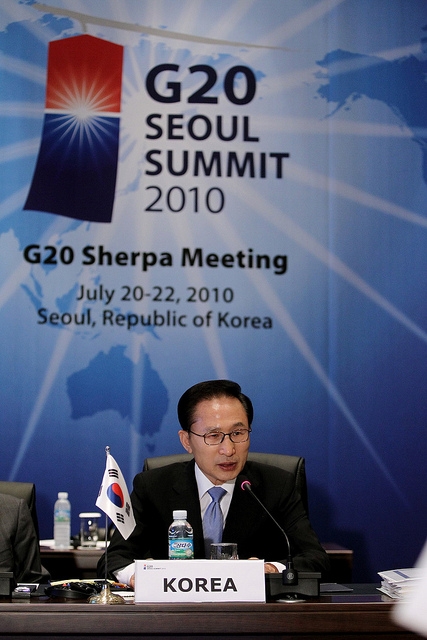 While global imbalances and a currency deal have been the headline issues for this week’s G20 meeting in Seoul (11 and 12 November), South Korea’s efforts, led by President Lee Myung–bak, to divert some of the attention to the global poverty and development aid agenda, have been struggling. Despite the meeting of the G20’s development working group in September, which was responsible for drafting what is being described as the Seoul Development Consensus, and support from international NGOs, development seems to have slipped down the Seoul meeting agenda.

Oxfam International has been one of the more energetic supporters for a G20 development consensus. In a briefing note issued in early October, it challenged the G20 to adopt an agreement committing to a long-term development agenda which puts the interests of the poorest people and countries at the centre of its work.

The G20, which produces more than 85 per cent of global GDP and is home to two-thirds of the world’s population, is now viewed as the premium forum for international economic cooperation. The potential contribution it can make in addressing world poverty was recognised at the Toronto G20 meeting earlier this year, when it agreed to establish a development working group and tasked the group to submit a multi–year action plan at this week’s meeting.

How Australia will support and even drive the development agenda which emerges from Seoul, or at least elements of it, remains to be seen.

In a statement issued on the eve of the Seoul meeting, Treasurer Wayne Swan detailed the priorities that he and Prime Minister Julia Gillard would focus on during the meeting. While balanced global growth, addressing global imbalances and delivering on structural reforms were listed, no reference was made to the development agenda which President Lee has been pushing.

With bipartisan support firm on increasing Australia’s aid budget to 0.5 per cent of gross national income by 2015/2016, it is yet to be seen how Australia may want to translate its credibility and standing within the G20 to a leading role within the group on development aimed at reducing global poverty.

Annmaree O’Keeffe is a research fellow at the Lowy Institute and works as a strategic adviser with CRCI in Ottawa. Annmaree is also a research associate at the Development Policy Centre.

Annmaree O’Keeffe is a Nonresident Fellow at the Lowy Institute for International Policy and an Associate of the Development Policy Centre.