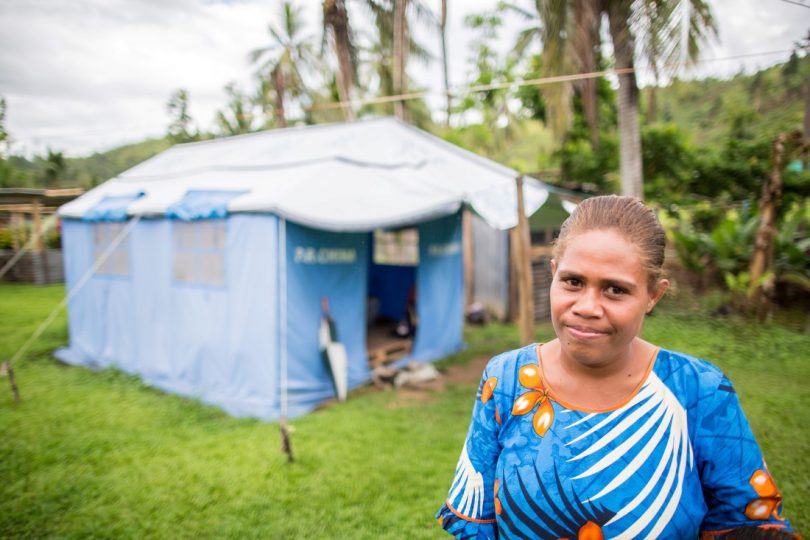 CARE assisted Laisa and her family as part of the response to TC Winston in Fiji (Credit: John Hewat/CARE)

After six years of aid budget cuts, in late 2018 the Australian government finally connected the role of Australia’s development cooperation efforts to the geostrategic importance of the Pacific region.

As proponents of a feminist approach to foreign policy – one which recognises the critical importance of gender in shaping the economies, governance and stability of nations, and requires the pursuit of gender equality as a standalone goal and analysis of gendered impacts of all foreign policy decisions – we welcome this shift.

However, as IWDA and CARE’s analysis of this year’s budget against this lens highlights, there are still very real gendered impacts of years of aid budget cuts and the rhetorical and practical distancing of the aid budget from other areas of foreign policy. We focus on four critical issues: aid volume, funding for infrastructure, climate finance, and measuring performance on gender equality within the aid budget.

The aid budget now stands at 0.23% of GNI and is expected to fall to 0.19% by 2023. This is inconsistent with a feminist foreign policy approach, and is even more egregious when, in the same week, a parliamentary inquiry chaired by Government MP Chris Crewther (Dunkley) strongly recommended Australia increase its aid investments to 0.7% of GNI over a ten-year period.

The budget shed no light on how the new Australian Infrastructure Financing Facility for the Pacific (AIFFP) will account for the gendered implications of macroeconomic policy.

The decision to use non-concessional loans which impose additional debt on Pacific countries is concerning, particularly given that research shows the cost of debt is disproportionately borne by women – up to 86% in some cases – via privatisation and the diversion of funding away from public services, which also increases women’s unpaid care burden.

There is potential for infrastructure to benefit women by reducing the time women spend collecting firewood or water, or enabling safer and easier travel to school, markets and workplaces. However, to realise these benefits, gender equality considerations must be intentionally built into program design. DFAT’s own gender equality and infrastructure strategies provide a solid foundation to support this gendered analysis.

It’s not yet clear whether gender expertise and consultation with local women’s groups will be included in the design of the AIFFP, which is being rushed through for operation by July 2019. DFAT has received an additional $12.7 million over four years to enhance its technical expertise and cover operational costs associated with AIFFP; this must prioritise gender expertise if the AIFFP is to provide development outcomes, especially for women and girls. It will also be critical to ensure projects funded through the AIFFP are climate resilient and do not contribute to further environmental degradation, especially such as through investment in fossil fuels.

Climate change is another area where Australia’s efforts fall short against a feminist foreign policy lens. A significant proportion of the existing funding will come to an end in 2019-20, despite Australia signing onto the Boe Declaration, which names climate change as the “single greatest threat to livelihoods, security and wellbeing of peoples in the Pacific.”

The increased funding for humanitarian responses, while welcome, puts the focus on recovery, while there is no new or additional funding for climate change prevention, adaptation or mitigation. In fact, Prime Minister Scott Morrison has voiced his disapproval of the Green Climate Fund, and stated Australia will not replenish its contribution.

Evidence shows that women bear the brunt of climate change because of their gender roles. More women die in natural disasters than men, and gender inequality is made worse through environmental disasters. In the Asia Pacific region, women accounted for 90% of all deaths due to the 1991 Bangladesh cyclone, and over 60% of deaths in Myanmar caused by Cyclone Nargis and in Banda Aceh during the 2004 tsunami.

Women must be supported to effectively participate in disaster risk reduction and climate change decision-making at all levels on a continued and ongoing basis. When programs are resourced to engage women, and leadership roles are shared, communities respond quicker to prepare, and suffer fewer effects, as demonstrated by CARE programs in Vanuatu around Cyclone Pam in 2015.

The 80% gender target continues to be the only target yet to be achieved of DFAT’s ten targets in the ‘Making performance count’ strategy. The 80% target aims to ensure Australia’s aid program is “effectively addressing gender issues in [its] implementation” across all of its projects — not just projects with an explicit gender equality objective.

% of investment effectively addressing gender issues in their implementation

Recent figures from the OECD also show a worrying trend in terms of decreasing funding for women’s rights organisations (WROs). Australia allocates a relatively high proportion of aid to WROs. While this is commendable, it’s highly concerning that Australia’s support dropped to $29 million in 2017, from a four-year high of $64 million in 2015.

WROs are the knowledge holders on the localised gender norms which can prevent or enable systemic change to be realised. Increasing support for WROs, and requiring consultation with them to ensure programs are optimally designed to address the systemic barriers to gender equality, will be critical to meeting the 80% target and ensuring Australia’s aid program is working towards transformative change.

Read the full report on which this blog is based ‘From rhetoric to reality: towards a feminist foreign policy’.

Caroline Lambert is the Director of Research, Policy & Advocacy at the International Women’s Development Agency.