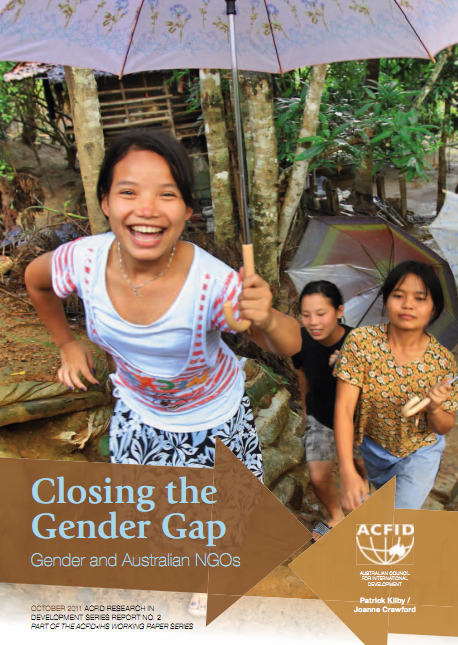 The Independent Review of Aid Effectiveness has been an important step in the development of aid policy in Australia, following from reviews by Jackson in 1984 and Simons in 1996. While it is welcome for its focus on people and poverty, in some ways it represents a step backwards in terms of gender policy and practice.

In response to the Simons Review, the updated gender policy of 1997 required AusAID to integrate a gender perspective throughout the aid program, with the needs, priorities and interests of women and men considered at all levels and stages of development in a gender mainstreaming approach.

Despite these changes at the policy level, Office of Development Effectiveness reports since then have demonstrated the poor outcomes of this important policy shift. The 2007 report posed the key question:

Given that the development community is peppered with such good intentions [regarding progressing gender equality], why will the 2007 policy stand any better chance of being implemented than previous AusAID policies or those of DFID, the World Bank or Oxfam, all of which have pointed out that their good intentions have not translated into actions that make a difference on the ground?

In 2009, the annual effectiveness report to the Government sadly found this prediction to have come true. The report found AusAID’s gender policy commitment had ‘yet to be translated effectively into performance results’ (p. 50) and that where gender components had been built into activities, they were ‘usually peripheral and rarely sustained’ (p. 52) and had not influenced AusAID’s strategic direction. There are many reasons why this might be the case, but one point made by the African Development Bank’s operation evaluation department report on Mainstreaming Gender Equality [pdf] is that a lack of leadership can both stop agencies committing to the changes required and from delivering coherent management strategies to carry through policies (which require much more than the occasional gender training).  This is the same problem that AusAID has had ever since the Beijing Platform of Action in 1994.

Despite progress in policy rhetoric but poor performance in practice, the Independent Review of Aid Effectiveness is remarkably silent on this issue, with no review of AusAID’s gender performance in its weighty 342 pages. Additionally, the recommendations it has made and the government’s response have relegated gender to being one of 13 sectors. Gender mainstreaming seems to have become a dirty word. However, the report suggests that ‘…the priority given to gender has increased’ (p.13). It is hard to see how that is so, given the retreat from earlier policy where gender was an overarching principle.

The real challenge is not in the rhetoric of reports and policy but in on-the-ground practice. Given the history of failure, it is hard to see how a step back from gender mainstreaming can lead to effective results.

A study released last week, titled ‘Closing the Gender Gap: Gender and Australian NGOs’, has found that for many NGOs, the inherent institutional blockages found by AusAID can be overcome. In the past five years, TEAR Australia has developed a comprehensive program to socialise gender more strongly and strategically across the agency, which has contributed to the sustainability of the nascent gender focus in its work. ActionAid and CARE Australia have a gender justice or women’s rights focus as the central driver of their work.  The key to the changes in these agencies has been strong leadership and board-led accountability processes that institutionalise gender across agency work.  Some of the successful strategies include regular gender audits and gender budgeting, so that it is clear where resources are spent. If these accountability mechanisms are in place then there is a very good chance that strong gender outcomes will follow.

It is disappointing that the Independent Review effectively took aid policy a few steps backwards on the issue of gender. It is a poor response to say that because something isn’t working, then we should give up on it. A better response — and hopefully one to be considered by AusAID as it develops a new gender policy — is how to have effective gender mainstreaming that institutionalises gender as a principle across programs and is connected to groundbreaking sectoral work.

Patrick Kilby is the program coordinator of the Masters of Applied Anthropology and Participatory Development at the ANU. Along with Joanne Crawford from the International Women’s Development Agency, he co-authored the report “Closing the Gender Gap: Gender and Australian NGOs”.