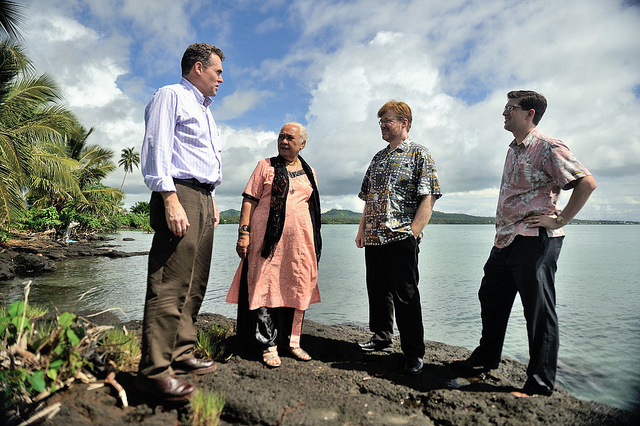 The Pacific Island Countries and Territories (PICTs) are at the frontline of climate change [pdf]. Already today, they feel the impacts of a changing climate, as the recent cyclones Pam in Vanuatu and Winston in Fiji and drought in Papua New Guinea only too clearly demonstrate. To deal with such extreme weather events but also slow-onset changes like sea level rise and increasing erosion, the industrialised countries—whose emissions caused climate change in the first place—pledged to provide financial support to developing countries, including the PICTs.

At the 2009 Copenhagen Summit [pdf], developed countries put forward the goal of “mobilising” US$100 billion per year by 2020 to help developing countries both reduce emissions and adapt to climate change impacts. This target was confirmed in the recent Paris Agreement [pdf], yet many questions are left open. Among other things, parties to the Agreement did not agree on who should provide how much to reach the collective target of $100 billion – a funding target which was to be sourced from both the public and private sectors.

So who is in fact giving adaptation finance to the PICTs? While I focused on the recipient side in an earlier blog post, I here examine who provides adaptation aid; that is, official development assistance (ODA), a key component of adaptation finance. As in my previous post, I only take into account disbursements reported in the Creditor Reporting System of the Organisation for Economic Co-operation and Development (OECD), where since 2010 donors have reported what part of their aid has adaptation as a significant co-benefit or as its principal purpose (see this pdf for more information on the Rio Marker for adaptation).

Where does adaptation aid in the PICTs come from?

Overall, US$705 million for adaptation was disbursed to PICTs between 2010 and 2014. Figure 1 below breaks down this overall adaptation aid by donor, distinguishing between multilateral and bilateral donors on the one hand, and between principal and significant adaptation on the other.

The OECD data includes flows from the European Union, the main multilateral provider of adaptation aid. It disbursed $93 million, with roughly equal shares to significant ($50 million) and principal adaptation ($43 million). Small shares of multilateral adaptation aid came from the Adaptation Fund ($15 million) as well as the Climate Investment Funds ($730,000), through its Pilot Program for Climate Resilience. 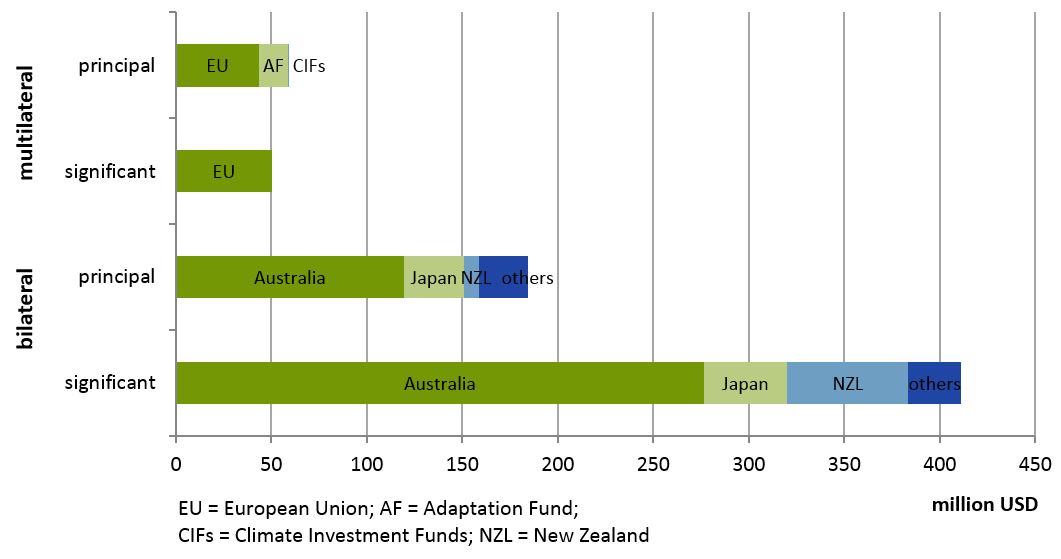 It is also illuminating to break down adaptation aid by donor and year, as Figure 2 below does. In 2010, only very little adaptation aid was disbursed to PICTs, though this is partly due to donors not applying the adaptation marker right after its introduction. In 2011, at the height of the fast-start finance period, PICTs received a record of $242 million in adaptation aid, yet the disbursed (as well as committed) adaptation aid has steadily declined since. This decline is driven by Australia. As the largest provider of adaptation aid in the region, Australia has reduced its support for adaptation quite significantly, from $169 million in 2011 to less than $40 million in 2014. Although the Australian government announced it would provide “at least A$ 1 billion” for climate finance until 2020 at the Paris climate summit, it is unclear to what extent PICTs will benefit from this pledge. Australia in general seems to be re-focusing its climate-related aid away from the Pacific to other regions of the world, notably East and Southeast Asia. Other donors—some of whom also made further climate finance pledges before or at the Paris summit—have not reduced their adaptation aid to PICTs, though overall adaptation aid is rather volatile, with relatively large year-on-year changes. 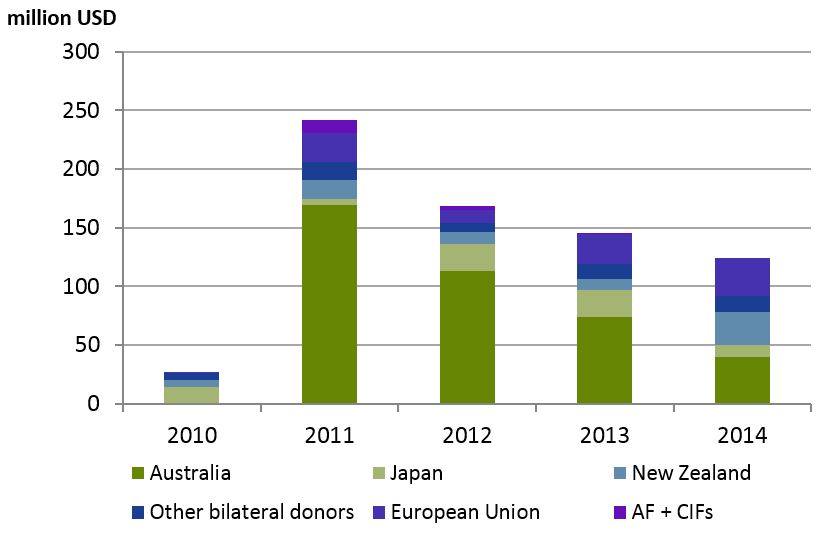 The numbers used here should be treated with caution, for several reasons. I already mentioned problems with relying on donors’ own reporting, and a closer look at the data illustrates this. Take for example the Lapetasi Wharf Project in Vanuatu, which Japan marked as having a “significant” adaptation component. Yet, it is not immediately clear how the construction of a new wharf will help the ni-Vanuatu capital be more resilient to climate change.

Additionally, the figures here do not take into account how individual donors support adaptation in the PICTs through multilateral channels. While most adaptation aid comes through bilateral channels, the importance of multilateral channels may increase in the future with the Green Climate Fund. The Green Climate Fund was established in 2011 under the UNFCCC [pdf, from p.55] and is expected to handle a large share of the $100 billion climate finance. It explicitly strives to achieve [pdf] a 50:50 balance between adaptation and mitigation, and reserves 50 percent of its adaptation support for particularly vulnerable countries, that is, the least developed countries, the small island developing states and African states. Accordingly, among the first eight approved projects, one was located in the Pacific region: the Fiji Urban Water Supply and Wastewater Management Project, to which the Green Climate Fund pledged $31 million.

Regardless of whether donors indeed capitalise the Green Climate Fund—and other multilateral funds—the majority of public adaptation finance will continue to reach the PICTs as bilateral ODA. It will thus remain very important to look very closely at bilateral adaptation aid, to monitor and track to what extent donors deliver on their climate finance pledges, what they count as adaptation finance, and to what extent the funds indeed help recipients to cope with and adapt to the negative impacts of climate change.

This post is the second in a two-part series based on a new Devpolicy Discussion Paper; read the first post here. Carola also presented as part of a panel on financing responses to climate change in the Pacific, held on July 25 at ANU – listen to the podcast here.