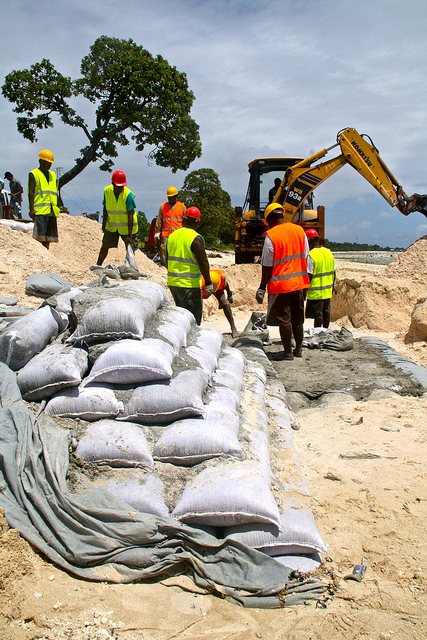 Climate change affects Pacific Island Countries and Territories (PICTs) disproportionately and puts past development achievements at risk [pdf]. Development assistance thus increasingly needs to take climate change into account in the PICTs. In general, outside assistance to deal with and adapt to the adverse impacts of climate change is important for PICTs, not least from a justice perspective; after all, PICTs only contribute minimally to global greenhouse gas emissions. While this assistance for adaptation to climate change should in principle be “new and additional”, in practice much of it comes as “regular” official development assistance (ODA), or adaptation aid. But how much adaptation aid do the PICTs receive, how is it distributed and who provides it? In this post and a new Devpolicy Discussion Paper, I focus on the overall level of adaptation aid as well as its distribution – on a per capita level – across the 16 PICTs considered by the Organisation for Economic Cooperation and Development (OECD) Development Assistance Committee (DAC): Cook Islands, Fiji, Kiribati, Marshall Islands, the Federated States of Micronesia, Nauru, Niue, Palau, Papua New Guinea, Samoa, Solomon Islands, Tokelau, Tonga, Tuvalu, Vanuatu and Wallis and Futuna, plus regional programmes. In a second blog post to follow, I will focus on the providers of adaptation aid.

The OECD introduced a so-called “Rio Marker for adaptation” in 2009, and has since collected data [pdf] on how much ODA targets adaptation as either a significant or the principal purpose. The latter includes projects that would not have taken place if it were not for adaptation, while adaptation is only a co-benefit for the former.

While the adaptation marker relies on donors’ own categorisation and has been criticised for over-reporting and mislabelling (e.g., see here and here), it provides the most comprehensive data on adaptation aid. All data here are taken from the OECD Creditor Reporting System, refer to disbursements and include both ODA loans and ODA grants. All figures are in constant 2014 US$ and comprise the period from 2010 through 2014, for which the adaptation marker is available.

According to the OECD data, PICTs received a total of about $705 million for adaptation between 2010 and 2014. That is less than seven per cent of all ODA disbursed to the PICTs in this period, and unlikely to meet what is required [pdf]. Of the $705 million, about $461 million (65 percent) targeted adaptation as a significant purpose, while for projects worth $243 million (35 percent) adaptation was the principal purpose.

Distribution across the PICTs

Let us look at per capita adaptation aid across the PICTs, reported in the figure below. On average, each Pacific islander received about $75 for adaptation. If we only consider projects that focused on adaptation as their principal purpose, the figure goes down to $26 for each Pacific islander. But there are stark differences across the individual PICTs: while each Niuean received more than ten times that average, each Papua New Guinean benefitted from only $10 for adaptation.

Niue is by far the largest recipient of per capita adaptation aid. Over the five years from 2010 through 2014, each of the about 1,500 Niueans received about $14,020 for adaptation to climate change. Of this, about $11,602 targeted adaptation as a significant purpose, and $2,419 as the principal purpose. 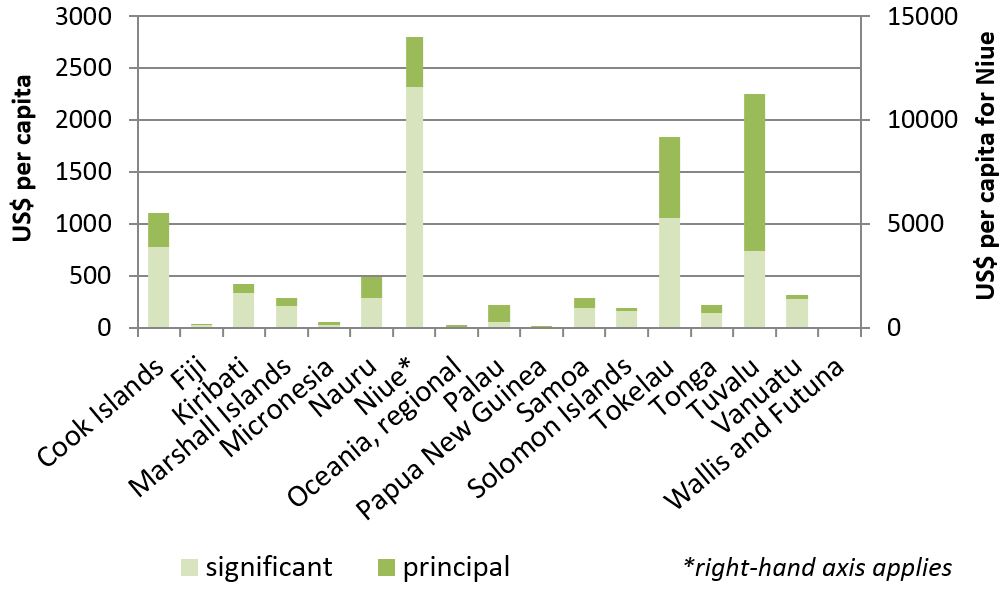 Tuvaluans were the second-largest recipients of per capita adaptation aid. Each Tuvaluan benefitted from $2,254 for adaptation projects. However, much of this comes from just one project: New Zealand committed $17.2 million for the Tuvalu Renewable Energy Projects (TREP) [pdf, p.16], of which it already disbursed $7.2 million. Given Tuvalu’s population of just under 10,000 inhabitants, this project translates into $726 per Tuvaluan. The project is marked as having both mitigation and adaptation as its principal purpose, and accounts for almost one-third of all adaptation aid disbursed to Tuvalu in the period of analysis.

This example illustrates two major problems with the OECD data, in general and for the PICTs in particular. First, it indicates the reliance on donors’ own classification of the adaptation relevance of their ODA. This classification is not always consistent, and the connection to adaptation often questionable. (Another example is the Lapetasi Wharf Project in Vanuatu, an infrastructure development project funded by Japan and marked as having a significant adaptation purpose.)

Second, given the small size of the PICTs, individual projects have a big impact on overall numbers and may give an incorrect impression of the role that adaptation plays in individual countries and territories.

Clearly, we need more detailed analyses that go beyond the OECD data, which often have only limited information on individual projects, in order to better understand and to track adaptation aid flowing into the Pacific region. What this short analysis shows is that only a small part – less than seven per cent – of overall ODA committed to the PICTs between 2010 and 2014 targeted adaptation – and given the reliance on donors’ own classification, this probably represents an optimistic upper bound. Furthermore, the adaptation aid that was committed was distributed unevenly. Whether it is indeed those most in need of support – those most adversely affected by climate change – that receive adaptation aid is rather unclear from the OECD data. That highly vulnerable countries – notably Papua New Guinea [pdf] – received very little support for adaptation suggests that this is not the case.

In the future, as climate change impacts will worsen, donors need to scale up their support for vulnerable countries like the PICTs; ensure that they are indeed providing new and additional resources to address adverse climate change impacts; and, importantly, ensure that the funding provided does indeed help recipients to adapt effectively and become more resilient.

This is the first post in a two-part series; read the second post here. Carola also presented as part of a panel on financing responses to climate change in the Pacific, held on July 25 at ANU – listen to the podcast here.