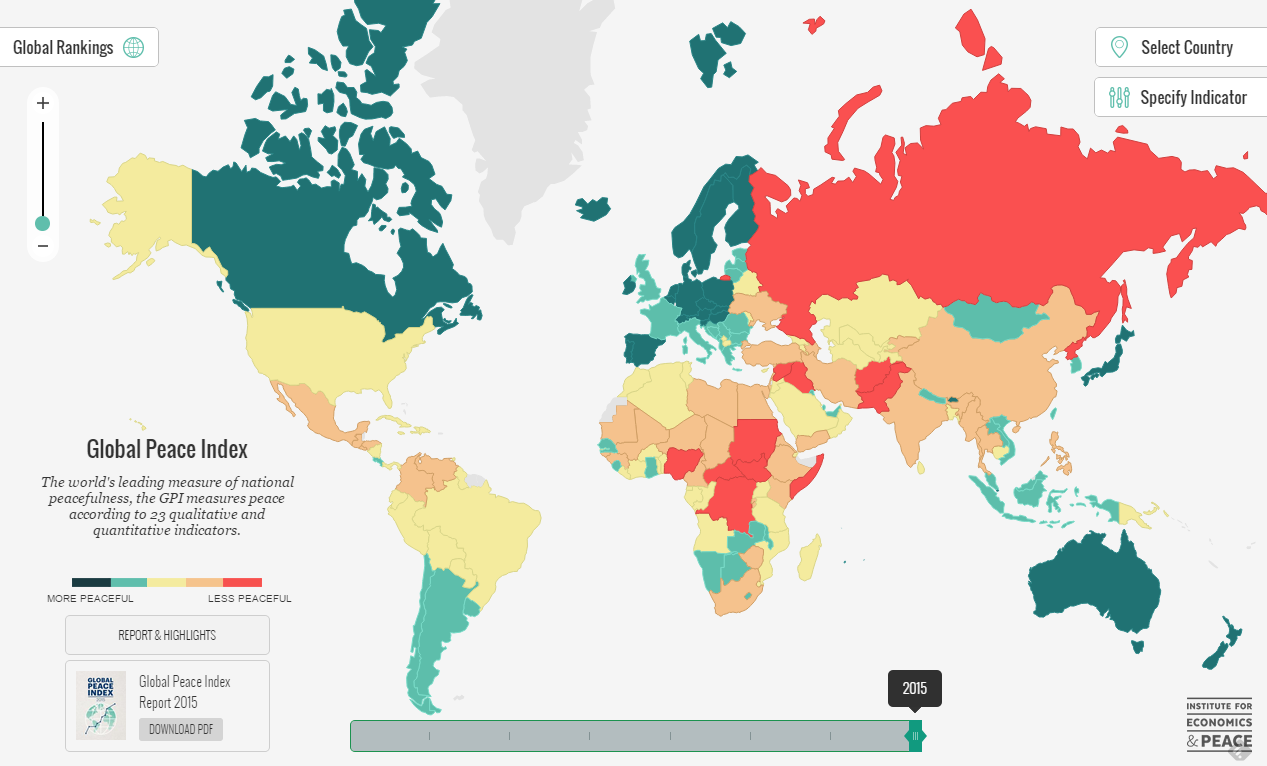 We are living in the most peaceful century in human history; however the 2014 Global Peace Index shows that the last seven years has seen a notable deterioration in levels of peace globally.

The 2014 Global Peace Index report analyses the state of peace around the world, identifying trends in violence and conflict, as well as the key drivers of peace. The 2014 Global Peace Index has been released and shows that the world is becoming a less peaceful place. This decline follows a seven year trend of decreases in peace, with 51 countries improving in peace and 111 deteriorating since 2008.

The Global Peace Index is the world’s leading measure of global peacefulness. It looks at the levels of domestic and international conflict, safety and security in society, and militarisation in 162 countries. The report, now in its’ seventh year, is produced by the Institute for Economics and Peace, a non-partisan, non-profit research organisation seeking to better understand the interaction between peace, the economy and human development.

This year’s report shows continuing deterioration in worldwide peacefulness last year. The decline this year is largely due to global increases in terrorist activity, the number of conflicts fought and the number of refugees and displaced people. This confirms a seven year gradual, but significant downward slide, which overturns a 60-year trend of increasing global peacefulness dating back to the end of the Second World War.

The most peaceful region of the world continues to be Europe while the least peaceful region is South Asia. Afghanistan has been displaced at the bottom of the index by Syria due to a slight improvement in its peace while Syria continued to deteriorate. South Sudan experienced the largest drop in the index this year falling to 160th and now ranking as the third least peaceful country. Major deteriorations also occurred in Egypt, Ukraine and Central African Republic. Iceland maintains its status as the most peaceful country in the world. Georgia showed the largest improvement in peace levels.

As regards some of the other countries in the region, Papua New Guinea has improved its performance in peace this year and moved up seven places in its rank to 90 in the 2014 Global Peace Index. This improvement came about due to lower levels of political terror, as measured by the Political Terror Scale, and reduced political instability. Timor-Leste on the other hand experienced a deterioration in peace, but still ranks higher than Papua New Guinea, at number 69. The country’s deterioration in peace was due to an increase in the levels of violent crime and the likelihood of violent demonstrations.

In addition to providing a comprehensive snapshot of world peace, this years’ Global Peace Index includes a new statistical modelling risk tool which identifies countries at risk of descending into violence and unrest in the next two years. The new methodology analyses a data set stretching back to 1996, and compares countries with the performance of states with similar institutional characteristics.

It is based on analysis of the relationship between peace, as measured by the GPI, and what is termed “Positive Peace”.  Positive Peace refers to the attitudes, institutions and structures that create and sustain peaceful societies and is measured by IEP in the Positive Peace Index (PPI). This measure has been empirically derived from analysis of factors that exist in more peaceful societies. IEP groups these factors into a framework of eight “Pillars”, which include:

So what are the countries today whose Positive Peace levels are weak enough to suggest a risk of deteriorating in their current levels of actual peace? The ten countries that have the highest potential for deterioration based on IEP’s Risk Model are Zambia, Haiti, Argentina, Chad, Bosnia and Herzegovina, Nepal, Burundi, Georgia, Liberia and Qatar. It is interesting to note that most of these are low income countries and none are full democracies.

However, knowing a country is at risk in only the first step. To use this knowledge effectively one would need to justify the benefits of preventative action. To do this IEP uses estimates of the cost of violence from its Violence Containment report. Projected changes in peace can then be combined with their potential financial impact to allow decision makers to better incorporate these risks into decision making by providing a measure of the potential economic and human impacts. To use a simple example, based on the IEP’s Risk Score and Violence Containment estimates a fall in peace for Chad could result in over 5 million people dropping below the poverty line.

While it will always be a balancing act between taking preventative action and responding to current events, the 2014 Global Peace Index and IEP’s Risk Tool provide a powerful framework for analysing peace and fragility. Although this research is not claimed to provide certainty in an uncertain world, it presents the potential for a greater focus on peace-building through proactively building the Pillars of Peace.

The Institute for Economics and Peace (IEP) is an independent, non-partisan, non-profit research organisation dedicated to shifting the world’s focus to peace as a positive, achievable, and tangible measure of human well-being and progress.

For more information read the report or use the interactive map to compare countries in the index.

Camilla Schippa is Director of the Institute for Economics and Peace.