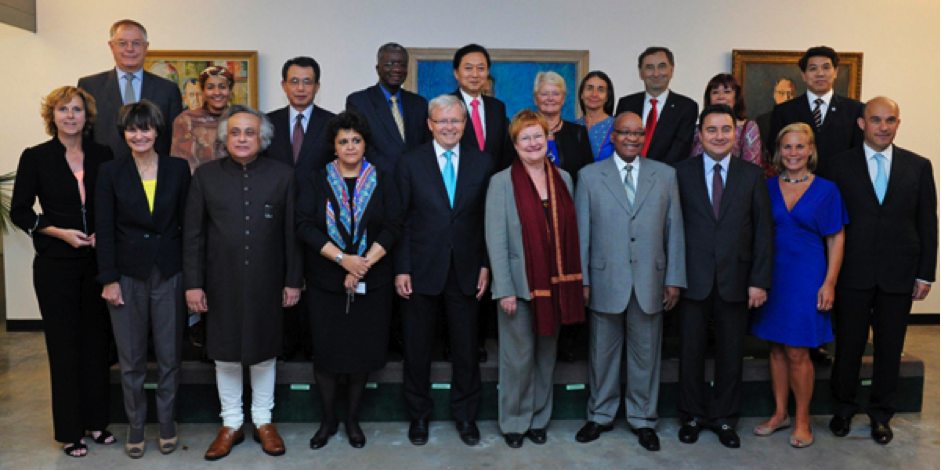 “Today our planet and our world are experiencing the best of times, and the worst of times,” declares the UN Global Sustainability Panel (GSP), whose report Resilient People, Resilient Plant: A Future Worth Choosing, was launched in Addis Ababa on 30 January 2012 to polite but muted applause.

The 22-member GSP, notionally headed by the Presidents of Finland and South Africa and including Kevin Rudd in a personal capacity, was formed by UN Secretary-General Ban Ki-moon in August 2010.  It was asked to think big – to come up with a “new development paradigm” and mechanisms for putting it into practice.

The panel’s product was, among other things, meant to help frame the forthcoming third global conference on environment and development, Rio+20, to be held from 20 to 22 June 2012.  The imposing precedent for this was Our Common Future, the 1987 report of Gro Harlem Brundtland’s World Commission on Environment and Development.  The Brundtland report strongly shaped the outcomes of the original Earth Summit in 1992, as reflected in Agenda 21 and related declarations, and which gave us the familiar formulation of the concept of sustainable development with its emphasis on intergenerational equity and on integrating economic, environmental and social policies.  Brundtland, now 72, also served as a GSP member.

Having borrowed its opening line from Dickens – nothing if not a chronicler of human resilience – the GSP report inevitably borrows much of the rest of its content from Brundtland: “the Brundtland report was right then, and it remains right today”.

I have not yet seen any attempt to compare the two pieces.  It is an obvious and, as it turns out, interesting thing to do. What follows is a brief and selective reflection on what the GSP report adds to, and subtracts from, Brundtland’s bedrock.  For more detail, see my related discussion paper.  I anchor this comparison in a discussion of two specific themes: international cooperation and resilience.  The first is prominent in Brundtland and largely absent in the GSP report; the second, vice versa.  It seems to me that much of what is puzzling or unsatisfactory in the GSP report flows from a systematic blindness with respect to the need for policy cooperation between states, and with respect to the uses of the concept of resilience. 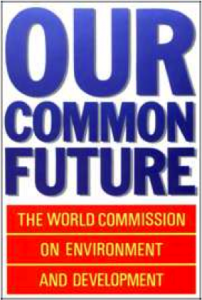 It was part of Brundtland’s mandate to propose “new forms of international cooperation” on environment and development issues.  Brundtland’s “message of hope” was “conditioned on the establishment of a new era of international cooperation”, reversing a perceived loss of confidence in multilateral processes and institutions.  Indeed, for Brundtland, “we live in an era in the history of nations when there is greater need than ever for co-ordinated political action and responsibility”, and “perhaps our most urgent task today is to persuade nations of the need to return to multilateralism”.  And of course Brundtland called for the negotiation of “new global and regional conventions or arrangements aimed at promoting cooperation and coordination in the field of environment and development (including, for example, new conventions and agreements on climate change, on hazardous chemicals and wastes, and on preserving biological diversity” – which conventions duly came into being from 1989 onward.

Only a muffled echo of this call for international policy cooperation and more effective multilateralism is to be found in the GSP report.  The multilateral environment agreements barely rate a mention, and international cooperation, where it is mentioned at all, is taken to refer to technical cooperation.  Technical cooperation, in turn, refers either to development assistance or to scientific cooperation.  In fact it is in relation to the latter that the report makes its only call for truly global cooperation:  “It is time for bold global efforts, including launching a major global scientific initiative, to strengthen the interface between science and policy.”

The GSP calls, instead, for a “new approach to the political economy of sustainable development” that “transcends the warring camps” within governments and societies.  This notion is born fuzzy and stays that way.  Essentially, though, it appears to be about gathering the knowledge and the will to reflect the true costs of our actions and omissions in economic policy-making, as well as carrying out other specific GSP recommendations, at or below the level of individual states.  The GSP describes the shift to this new approach as “a core challenge for politics”, but studiously avoids stating what level of politics it has in mind.

As I show in my discussion paper, in all of the key areas it addresses – in its discussion of planetary boundaries, the pricing of negative environmental externalities, trade-offs, sectoral challenges, development financing and multilateral institutions – the GSP report appears systematically and almost wilfully blind to the necessity of addressing global issues through international policy cooperation.  The need for effective international agreements and institutions, including financial arrangements and institutions, goes largely unregistered.  To some extent, this might be seen as a necessary correction of Brundtland’s tendency to place developing countries in the role of victim-beneficiary, and to speak of international cooperation as if it required effort only on the part of developed countries – but, if so, it is quite an over-correction.

One could say that the loss of confidence in multilateralism bemoaned by Brundtland is rather fully exemplified by the GSP panel.  This is an ironic observation given that the GSP report’s most immediate purpose is to frame this year’s discussions in Rio.  Lack of progress in global climate change negotiations might be a large part of the explanation for this loss of confidence – the panel was heavily populated by walking wounded from the 15th Conference of the Parties to the UN Framework Convention on Climate Change in Copenhagen – but cannot be the whole explanation.  There is perhaps a latent view that the multilateral system is better at establishing rules of conduct than at solving complex coordination problems involving competition for scarce resources, compounded by a sense of fatigue brought about by the constant spawning of new multilateral institutions and processes – with no corresponding retirement of old ones.

In the entirety of the Brundtland report, the word resilience occurs just once – in connection with urban centres in industrialised countries (said to be better able to recover from shocks owing to advanced technology, strong national economies and well-developed institutions).  The GSP report, by contrast, is ostensibly all about resilience: resilient people, resilient planet. 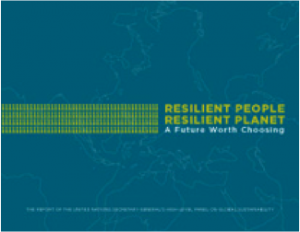 In a world recently beset by sudden-onset food, fuel and financial crises, and preoccupied by the slow-motion shocks associated with climate change, this concept has quite naturally loomed large.  Countries’ ability to weather shocks is determined not by their wealth or rates of growth alone, but also by deeper structural characteristics.  Resilience is a dispositional property: a person or country is resilient if they are such as to recover quickly and well from shocks.  However, the targets and measures we most commonly use are not dispositional: they deal in surface quantities.  A second point about resilience is that it can be an expansive property: resilience in one part of a system, including the system that is the global economy, can increase the resilience of the whole.  For example, if import demand in poor and especially middle-income countries holds up through a global financial crisis, this helps speed recovery in richer exporting countries.

Ubiquitous as the concept has become, resilience actually doesn’t get much of a run beyond the title of the GSP report.  To the extent that it does, the focus is on the role of safety nets in protecting the most vulnerable groups from the impacts of economic transition (including the green transition) and exogenous economic shocks.  There is no sense of the broader role that effective social protection mechanisms (social protection “floors” in the terminology of the International Labour Organisation) play in buttressing national and global stability, or any sense that there is a need to reconsider the priorities of international development agencies, multilateral and bilateral, so as to promote the spread of such mechanisms.  Brundtland was noticeably stronger on this point (“a development path that combines growth with reduced vulnerability is more sustainable than one that does not”) even if she did not use the language of resilience and social protection.

One might say that the GSP knew that resilience was in the air – in part because of the currency of the term in two overlapping contexts: discussions on climate change adaptation and discussions on the poverty impact of economic shocks – but was not really sure what to do with it.  More could in fact have been done.  In particular, the concept of resilience could have been used better to motivate what the GSP report says about the idea of sustainable development goals – which is rather little.  A good general strategy might have been to start with the notion of resilience and spend some time thinking about how the sequel to the MDGs could be better framed so as to incorporate it.

Overall, it is fair to say that the GSP report, while consciously continuous with Brundtland in many respects, is in some ways much weaker.  It takes a big step back from Brundtland’s call for strengthened international cooperation, and fails to deploy its most conspicuous piece of contemporary clothing, the concept of resilience, effectively to advance discussions on sustainable development generally and on sustainable development goals in particular.  It is already hard enough to find anyone who thinks Rio+20 will produce distinctive outcomes; the fact that this report provides the main frame for discussions gives no cause for optimism.

Robin Davies is a visiting fellow at the Development Policy Centre.