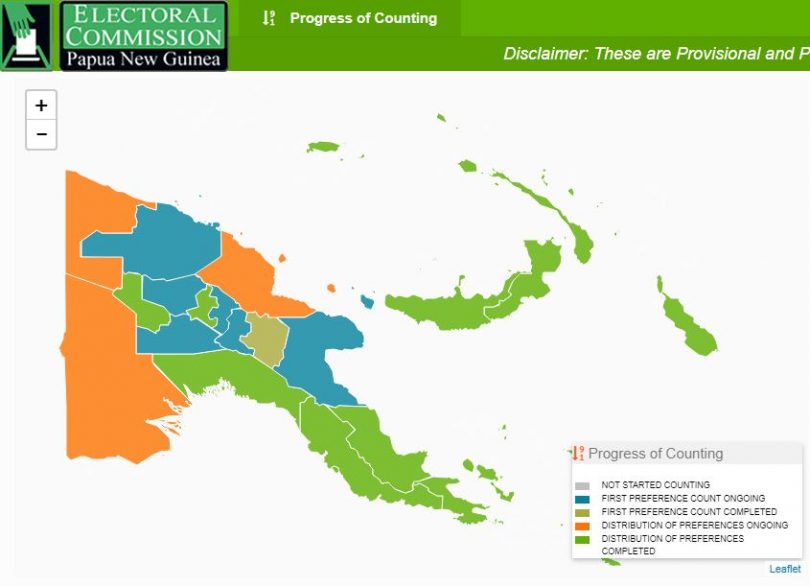 The Papua New Guinea Electoral Commission gadget has all the hallmarks of a misconceived donor project gone wrong, and left abandoned. Neatly laid out on an interactive colour-coded map of Papua New Guinea, the Commission’s gadget depicts each province in orange, green, grey, beige or blue to designate progress in counting ballot papers at the June-August 2017 polls. The website was updated so slowly during the critical late July vote-counting days that it was way behind what was being reported on national TV or radio or in the daily newspapers. Since the Prime Ministerial election on August 2nd, it has languished in a multi-coloured state of semi-completion, full of errors and omissions.

The problems commence with the design itself.

Second, the Commission uses the misleading term ‘count’ for two very different stages of the tallying process. This was enough to confuse at least one well-known electoral specialist into misreporting the 2017 results. Initially, the ‘count’ refers to the counting in of the ballot papers from the numerous ballot boxes (though unlike the 2012 elections, the Commission did not in 2017 publicly release critical information about how many ballot boxes to expect in each constituency). Subsequently, the word ‘count’ is used for successive eliminations. Those inputting the data were clearly themselves confused by this, and so many constituencies were miscoded as having eliminations in progress when counting agents were still centralizing the ballot boxes and putting together a first preference count.

The two stages in the tallying process are recorded respectively on the Commission’s 66A and 66B forms, but the critical stage — and the focus of many of the disputed results in the Highlands — is that point when all first preferences on all papers in ballot boxes have been counted, but the eliminations have yet to commence. This is the stage where the Commission’s own procedures require a careful check and cross-check. No additional ballots can be included later. The Commission’s gadget was ill-equipped to report that critical stage, but the cost of failure in this respect was a heavy one in terms of transparency.

In three cases, the Commission never reported any data either of the ballot box count (66a) or the eliminations (66B): North Bougainville, Middle Fly and Jiwaka Provincial. As of 18 August, these remain coded grey, i.e., ‘not yet started counting’, although declarations have been made and writs returned for all three.

For another 29 constituencies, the gadget was left uncompleted, either only with a few ballot boxes shown or with the progressive tally frozen at some point prior to the final count.  This includes even constituencies declared fairly early, such as Komo-Magarima.

For future elections, instead of offering over-sophisticated gadgets that fail to report the basic data, the Commission might be better off doing something much easier and simpler. First, it could publicly release the electoral roll by constituency and details of the number of ballot boxes expected per constituency. That could be done ahead of the election, and so would not add to the heavy administrative load in the busy post-polling period.

Second, the Commission should release the full first count tallies before the eliminations commence. These are essential for those that want to follow successive stages in the counting process. Ideally, the Commission would also release the final tallies, but these are anyway widely reported in the media at least for the leading candidates. One positive feature of the 2017 website is that, unlike previous elections in 2007 or 2012, it reported the number of exhausted ballots.

After the election, the Commission should release the 66A and 66B forms. These were never officially released after the 2007 and 2012 elections, but they are essential for any analysis of how limited preferential voting has worked in PNG. At the constituency level, candidates and scrutineers anyway keep records of these tallies, so public concealment at the national level serves no purpose as regards local confidentiality.

Indeed, one striking feature of PNG’s 2017 election is that nearly every province had its own online forum, often on Facebook, with tallies at successive stages being broadcast from mobile phones by those inside the counting centres. The Commission needs to catch up with what is happening on the ground, and offer a credible centralized source for election results.

Jon Fraenkel is Professor of Comparative Politics in the School of History, Philosophy, Political Science and International Relations at Victoria University of Wellington.

Jon Fraenkel is a Professor in Comparative Politics in the School of History, Philosophy, Political Science and International Relations at Victoria University of Wellington. He formerly worked at the Australian National University (2007-12) and the University of the South Pacific in Fiji (1995-2007). He is author of The Manipulation of Custom; from uprising to intervention in the Solomon Islands and co-editor of The 2006 Military Takeover in Fiji; A coup to end all coups? He is the Pacific Islands correspondent for The Economist.