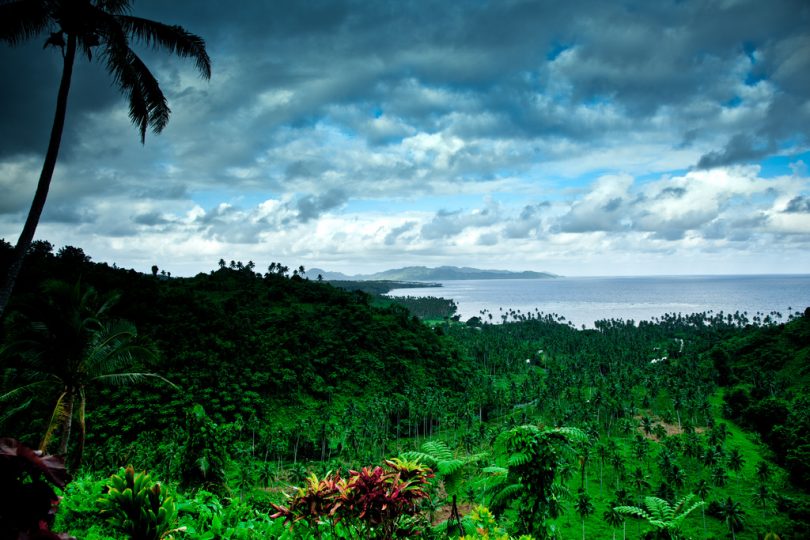 These are all questions explored in our recent article in Asia & the Pacific Policy Studies, titled ‘What’s in a term? “Green growth” and the “blue‐green economy” in the Pacific islands’. We examine usage of the term at the regional level, and in Fiji and Vanuatu, drawing on both existing grey literature and interviews with politicians, public servants, civil society, the private sector, and donor agencies.

What we find is a contested policy space, where Pacific actors deploy competing meanings of green growth terms in ways that both reflect their worldviews and support their agendas.

This is most evident at the regional level, where competition between regional organisations now extends into usage of green growth terminology.

The Pacific Island Development Forum’s (PIDF) original embrace of green growth as its raison d’être did not occur in a political vacuum. It formed part of the PIDF’s unique selling point in a crowded regional landscape. Importantly, it was advocated by those challenging the political settlement at the Pacific Islands Forum (PIF), as a more uniquely Pacific vision than the PIF priority of regional economic integration. In contrast, the Pacific Islands Forum Secretariat (PIFS) has until recently been reluctant to adopt green growth terminology, instead favouring terms such as “resilient development” and “low carbon pathways” when discussing climate change, disaster preparedness and disaster management. This only changed in 2017, when PIF leaders endorsed a statement of regional identity centered around “the blue Pacific”.

In Fiji and Vanuatu, green growth has assumed a different hue to that of regional discussions. In Fiji, the Government set out a Green Growth Framework (GGF) in the lead up to the country’s first election in nearly a decade, as it borrowed the term to articulate a uniquely Fijian vision for national development. The Fiji government also sought to re-position itself on the global stage as a leader in multilateral environmental diplomacy (diplomacy not always reflected in domestic environmental policy).

In Vanuatu, green growth was adopted in a decidedly Vanuatu syntax, captured in the National Sustainable Development Plan (NSDP). Local political leaders drew on long‐running national debates about appropriate development as they sought to articulate a “people’s plan” that valued economic growth as well as the country’s environment and wealth of traditional cultures. Here, the emphasis was on strengthening the traditional economy, or “the kastom economy” — an idea with a long history in Vanuatu, where indigenous values are frequently contrasted with those underpinning Western economic models.

What was also clear from our discussions was that there was no one understanding of green growth in the Pacific. Organisations and individuals used different (and sometimes contradictory) understandings of green growth in ways consistent with their worldview, often as a means to support their own agendas. So too did governments, as illustrated by Fiji’s adoption and deployment of green growth as part of its broader foreign policy strategy.

Nonetheless, there were common themes that arose in our discussions that differentiated the use of “green growth” in the Pacific from its usage internationally. The first involved an emphasis on self‐determination and resource sovereignty: concepts that are foreign to international discussions of green growth. The second involved an emphasis on the broader context of cultural obligations and indigenous concepts of ecological stewardship — a theme often associated with sustainable development (and its social objectives), but not one often drawn on to describe green growth in other parts of the world.

Such understandings of green growth are especially interesting given that they sit in direct conflict with global usage and criticism of the term, which detractors have argued is market-centric and forms part of a broader shift towards the application of economic approaches to nature. In the Pacific, no such criticism has taken place. Instead, the term has been used by many to promote an alternative development model to the neoliberal focus on economic growth.

In this sense, the introduction and dissemination of green growth terminology in the region echoes the introduction of other foreign ideas and institutions in the Pacific. As Peter Larmour famously noted, foreign ideas and institutions are never transferred unchanged but are used and interpreted locally. Pacific actors have used green growth terminology differently in ways that support their own agendas and worldviews. It is this flexibility and lack of precision in usage that has contributed to its widespread dissemination and use. What remains to be seen is the extent to which such usage has tangible impacts on public policy in the region.

This post is published in partnership with Policy Forum, Asia and the Pacific’s platform for public policy analysis, debate and discussion. It is based on the authors’ article for the Asia & the Pacific Policy Studies journal ‘What’s in a term? “Green growth” and the “blue‐green economy” in the Pacific islands’.

Dr Sandra Tarte is Head of School and Director, Politics and International Affairs at the University of the South Pacific in Suva, Fiji.