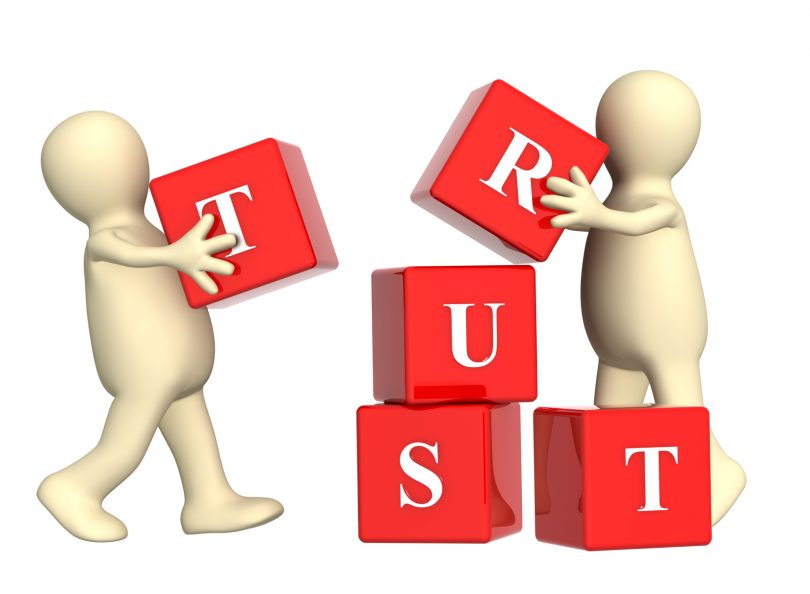 Most Australian development NGOs rely on public donations. This means trust is like oxygen for them. People won’t give to organisations they don’t trust. And without donations, it’s not possible to work.

Obviously, the most important aspect of the Haiti scandal that engulfed Oxfam Great Britain in February is the scandal itself, and the issues it exposed. But if, like me, you’re interested in what people in donor countries think about aid, it has been hard not to wonder what the scandal might mean for trust in NGOs.

The Haiti scandal didn’t involve an Australian NGO, but the misdeeds became a news item here. Did this cause trust in Australian NGOs to collapse, reflecting the severity of the issue? Or have Australians taken the event in their stride, either because they missed it all together, or because the trust is shaped over the long term, not by particular events?

Caught up with these questions, I took advantage of an available dataset, gathered some more data, and am now able to offer some answers.

In late 2017 while working on the ACFID State of the Sector Report I commissioned a question about trust in NGOs from the survey firm Essential Media, who put it to a broadly representative sample of over 1,000 Australians.

The question was (paraphrasing slightly): “Thinking now about Australian non-governmental organisations and charities that do aid work in poorer countries, how much do you trust them to do the right thing all of the time?”

Answers were on a zero to ten scale, where zero meant don’t trust at all and ten meant trust a lot.

(I commissioned the question while I was working with ACFID on the State of the Sector Report, but the question was paid for by Devpolicy, and all subsequent analysis is my own. It does not necessarily reflect the views of ACFID.)

In March this year, just after the height of the Haiti scandal, I got Essential Media to ask the exact same question to a similarly representative sample of 500 people.

What did I find? You can see the results in the chart below. 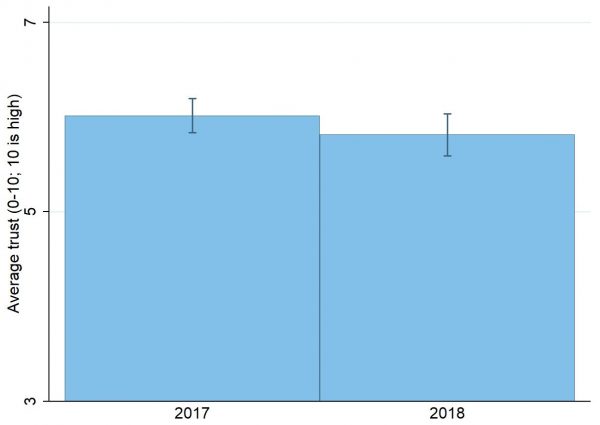 Trust in NGOs is slightly lower after the scandal than before it. The difference is small though. One fifth of one point on an 11 point scale. What’s more the difference is not statistically significant. (In other words, it is possible it is simply a product of the chance involved in survey sampling.)

One plausible objection to this simple before and after comparison is that trust might have been growing rapidly and the scandal put paid to that. This is unlikely: research published by the Australian Charities and Not-for-profits Commission (ACNC) in 2017 indicates that, if anything, trust in NGOs was trending downwards prior to the February scandal.

Another possible objection is that survey respondents may have failed to make the connection between the ‘Oxfam’ name and NGOs in general. I tested for this, however, getting Essential Media to send a slightly different question to 500 different respondents (with random treatment allocation). This question gave three examples of NGOs, including Oxfam, just to make sure that people made the connection. The difference between responses to the general 2018 question and the 2018 question which had Oxfam included as an example, was not statistically significant. In other words, people failing to make the connection between Oxfam and NGOs does not appear to be an issue.

(You can download the t-test results I’m drawing on, as well as regressions run to control for differences in group composition here.*)

On average, trust in aid NGOs has not collapsed in Australia in the wake of the Haiti scandal. It’s hardly shifted.

Of course, this doesn’t mean that Australian NGOs shouldn’t be concerned with what occurred in Haiti. Trust or not, the issue is incredibly serious for organisations that exist to help vulnerable people. My own trust has been boosted by the fact that, as Dyan Mazurana points out in her excellent analysis, Oxfam International has already taken substantial steps to address the issues it faces. Here in Australia, ACFID has started its own independent review of the broader problems. This isn’t the same as problem solved, but it points, at least, to a problem that is being taken seriously.

*There was a statistically significant difference between the general 2017 question and the 2018 question which used Oxfam as an example. It is hard to know what to make of this difference as it used different questions and was from different points in time. There were also other technical challenges in conducting my analysis. If you’re interested, you’re welcome to email me.