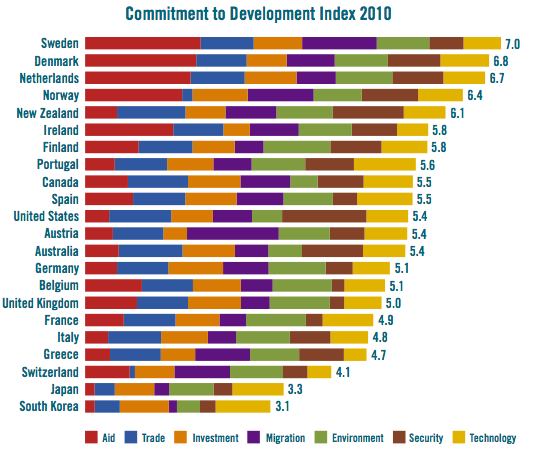 With the recently released 2010 Commitment to Development Index (CDI), the Center for Global Development (CGD) has given us another opportunity to see where Australia stands when it comes to its commitment to development.

The CDI ranks 22 of the world’s wealthiest countries based on their dedication to policies that benefit poorer nations. The CDI goes beyond standard international comparisons of aid volumes to look at how a range of rich country policies — including trade, investment, migration, environment security, technology and aid policies — affect poor people in developing countries. The key message is that rich country policies matter for development, and the index highlights what rich countries do to help or hinder development abroad.

What’s the global picture? How do countries rank?

Sweden comes first on the 2010 CDI on the strength of high aid quality and quantity, admission of large numbers of migrants, and low and falling greenhouse gas emissions. Close behind are Denmark, the Netherlands, and Norway, also generous aid donors. New Zealand and Spain make it to the top half with a very different profile: generally low on aid but strong on trade, investment, migration, and security. Among the G–7 countries — those that matter most by dint of their economic power — only Canada and the United States squeeze into the top half. Japan and South Korea finish last. Like the United States, the two Asian nations have small aid programs for their size. The two also engage less with the developing world in ways measured by the CDI, with tight borders to the entry of goods and people and limited involvement in peacekeeping. Still, even the first–place Swedish score only about average in four of the seven policy areas. All countries could do much more to spread prosperity.

And where does Australia stand? Australia ranks 11th or 12th overall, depending on which document you read. We rank 2nd on trade, 3rd on security, 4th on investment, 11th on technology, 13th on aid, 15th on migration and 19th on environment.  According to the Australia country report, Australia’s CDI score is driven by:

… its leading role in peacekeeping efforts, low trade barriers against developing country agricultural exports, and policies that promote productive investment in poor countries. On the negative side, Australia bears a small share of the burden of refugees during humanitarian emergencies and has the highest greenhouse gas emissions rate per person.

Australia’s need to lift its game on both refugee and climate change policies doesn’t come as much of a surprise. But it is also disappointing to see that Australia’s CDI score has not changed since the CDI was first published in 2003. Australia is one of only four countries where there has been has been either no change in CDI score, or a decline.

The great strength of the CDI is that it forces us to think beyond aid when we examine how rich countries engage with poorer countries.  Trade, migration, environment, technology and security policies can have a much greater bearing on people’s lives than aid. This does not mean we should ignore debates, analysis or policies on aid. But it does remind us that aid is part of a much bigger picture.

As Annemarie O’Keeffe highlighted in her blog, the G20 meeting in Seoul this week offers an opportunity for leaders from G20 countries to make firm commitments to tackling global poverty. At the Toronto Summit in June, the G20 stated that it is ‘committed to narrowing the development gap and … must consider the impact of our policy actions on low-income countries’. In the lead–up to the Seoul Summit, a G20 High–Level Working Group was established and is expected to propose a multi–year development action plan for the G20.

While across the board there have been slight improvements on the CDI since 2003, Australia, and the G–7 countries, have much room for improvement when it comes to their commitment to development.

This G20 Summit offers rich countries a chance to collectively commit to policies — particularly on growth, trade, investment and development financing – that will narrow the gap between rich and poor.

Kate Higgins is a Research Fellow with the Overseas Development Institute, a UK international development and humanitarian policy think tank. Kate is also a Research Associate at the Development Policy Centre.