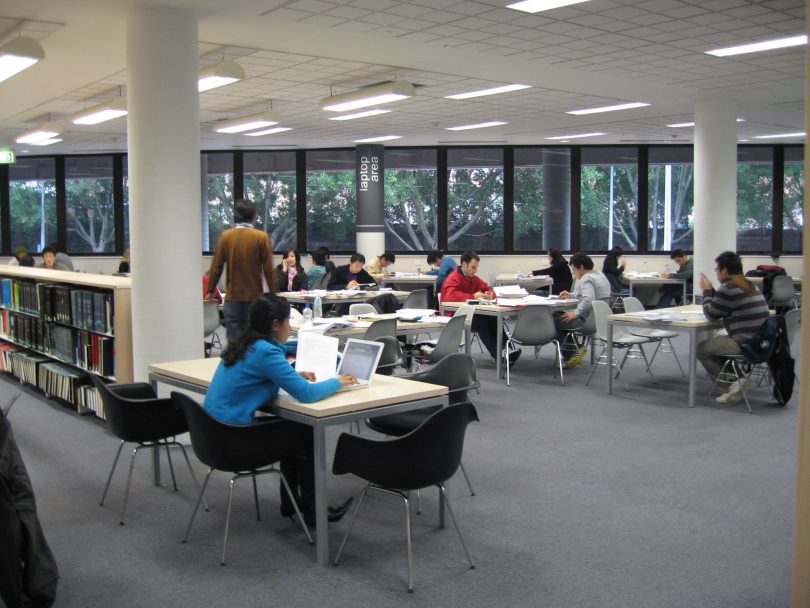 The participation of international students in Australian education has increased markedly over the last 16 years, to reach a total of just over four million visas granted to primary applicants. However, the students are, for the most part, from middle- or higher-income countries and from families who can afford the high fees involved. This cost excludes most students from Australia’s near neighbours.

This blog examines the extent and nature of education participation by students from the Pacific and Timor-Leste, with a specific focus on Papua New Guinean students. It looks at students attending secondary, post-secondary technical and vocational education and training (TVET), and tertiary education institutions in Australia.

The benefits of participation extend well beyond the quality of the education received. At secondary education level, students from the Pacific have the chance to develop close personal ties with fellow students and their families that continue beyond the end of schooling. For post-secondary and tertiary graduates, the chance to gain relevant work experience and join a professional network will open up a greater range of opportunities over a graduate’s working life, in the Pacific and Australia (and elsewhere).

Two separate but linked data sources on education participation in Australia by nationality show the numbers of students attending at different education levels. The two data sources are ​the Department of Education, Skills and Employment international student data, and the Department of Home Affairs student visas granted. Each dataset has its strengths and limitations. The statistics used in this blog are based on the student visas granted; however, after taking into account the differences in what they record, both data sources confirmed each other.

The number of student visas granted for all education sectors to all Pacific countries and Timor-Leste nearly doubled over 15 years, to reach 1,868 in 2019-20, before the onset of COVID-19. However, digging deeper into the data shows that nearly half of the visas were granted for courses funded by the Foreign Affairs and Defence sector (Figure 1). An explanatory note with the data indicates that visas for the Foreign Affairs and Defence sector do not record a registered education provider, and so can be termed non-formal education and training. This means that only just over half of the visas granted (54%) over this period were issued for students to participate in school education, TVET and higher education. 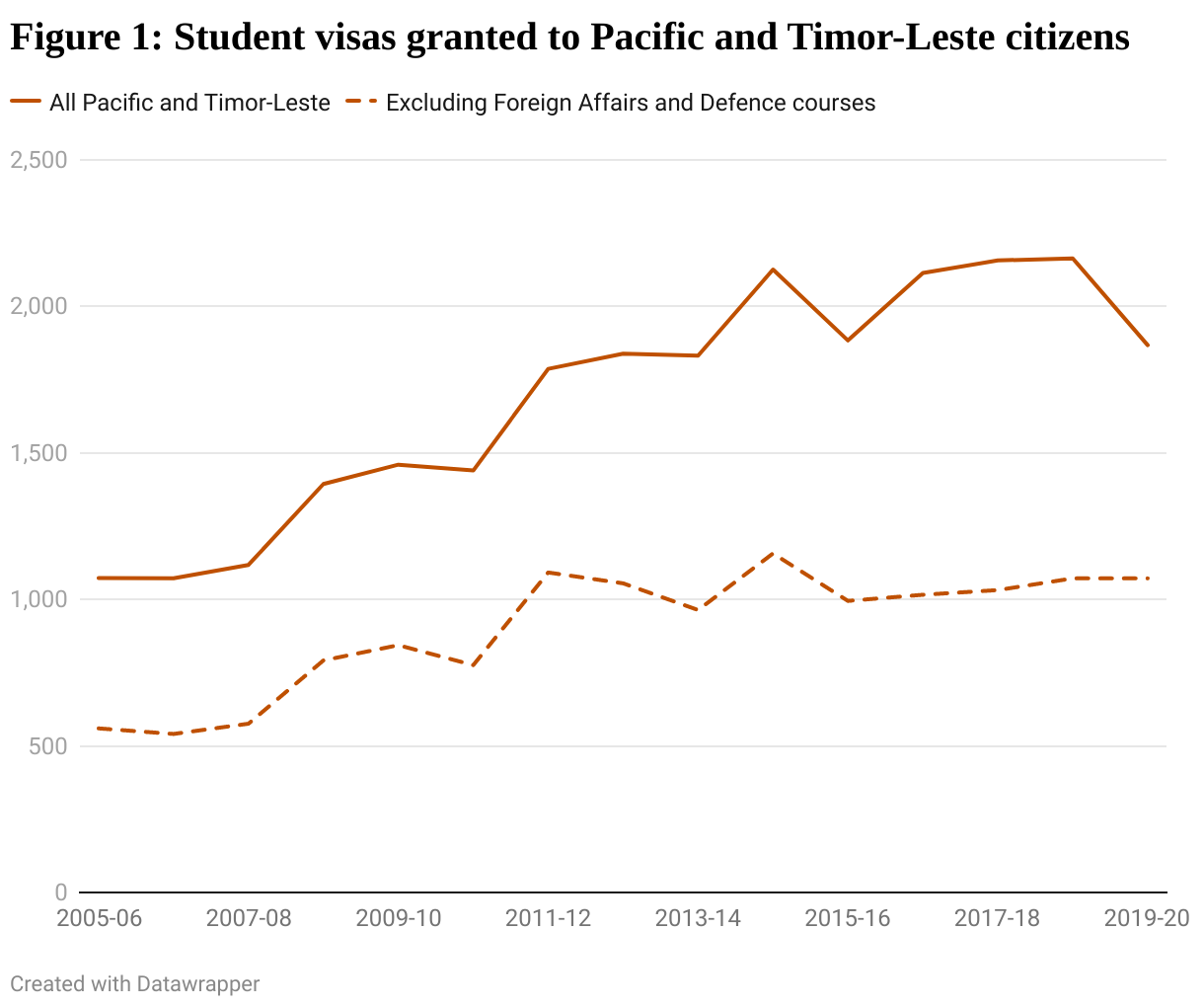 Figure 2 narrows in on the data for student visas granted for formal education purposes (that is, excluding visas for Foreign Affairs and Defence training), dividing them into three groups: PNG, Fiji and Others (other Pacific countries and Timor-Leste). 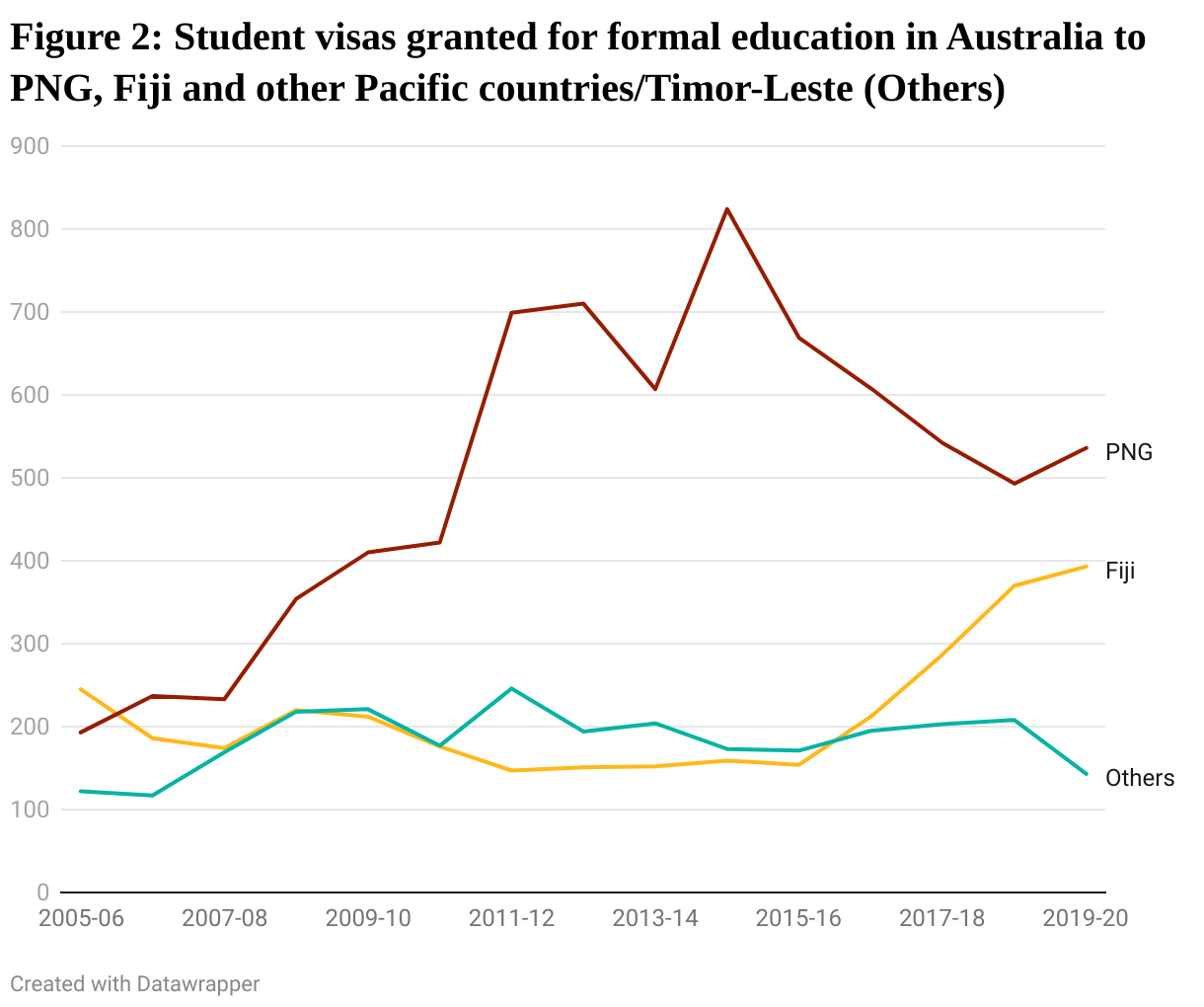 The PNG trends follow the boom-and-bust cycles of the PNG economy. Fiji shows a sharp increase in recent years; and student visas to other Pacific countries and Timor-Leste are flat.

We can take the analysis further by comparing school, TVET and tertiary education visas for the three source country groupings (PNG, Fiji and Others). Figure 3 shows data for first and last year available, and for 2014-15, the peak year for student visas from the Pacific. 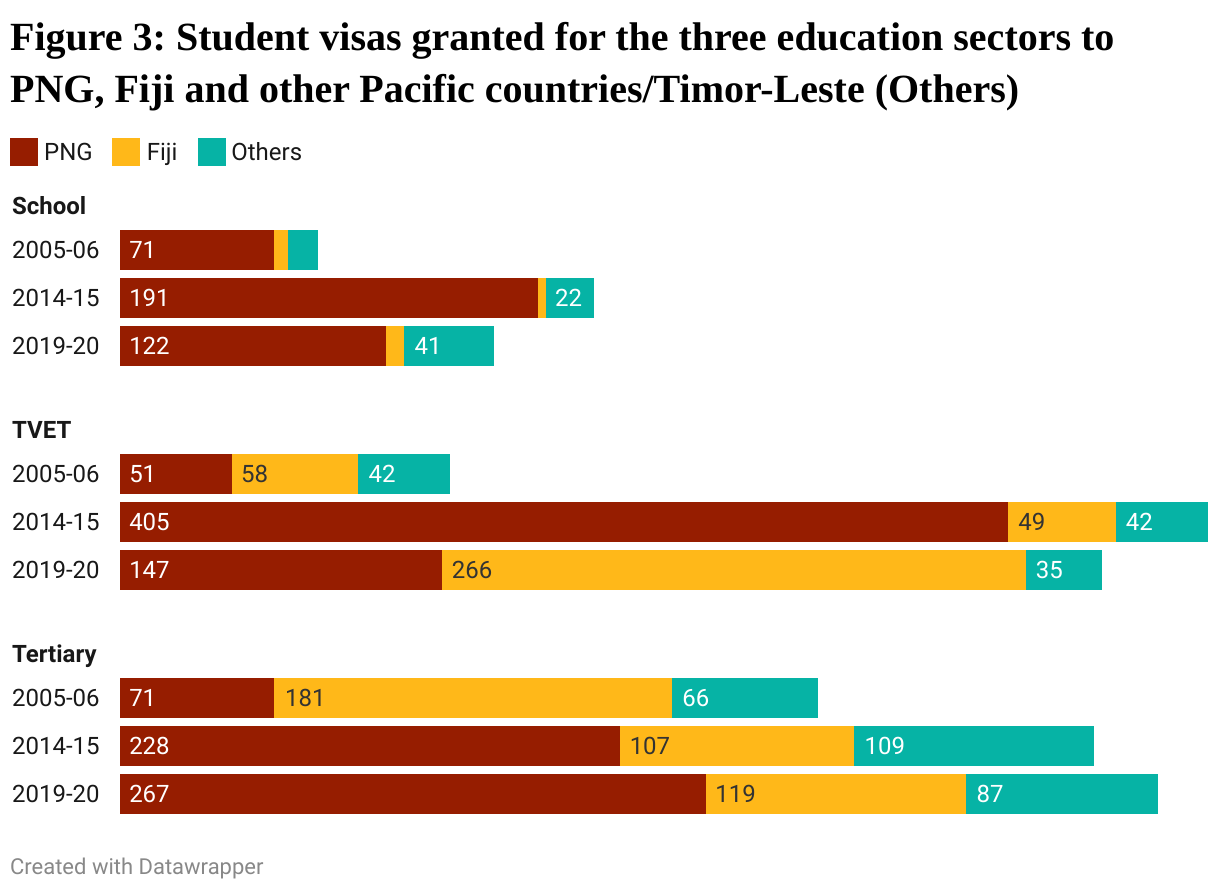 There is no sustained increase in student visas for school education. However, there is a big increase in TVET visas, due first to PNG growth and then to Fijian. Fiji in fact shows a five-fold increase in TVET visas from 2016-17. This may be due to some Fijian households funding their children to undertake TAFE (technical and further education) courses as a migration pathway, to access work in occupations in demand.

There is a sustained increase in visas for tertiary education to Papua New Guineans. This trend does not follow the boom–bust cycle evident in PNG visas for school and TVET study. It may be that most PNG tertiary students in Australia are on aid-funded scholarships.

These low numbers of students from Australia’s near neighbours highlight a major gap in Australia’s relations with these countries. More aid-funded scholarships are only a part of the answer. The APTC (Australia Pacific Training Coalition) can do much more to help their appropriately qualified graduates to migrate as skilled workers with their families to Australia.

The private sector also has a major role to play. Large resource companies operating in both Australia and PNG should be funding more scholarships at TVET and tertiary institutions. Philanthropists wanting to improve community-to-community ties with our near neighbours could support students to attend boarding schools in Australia, especially in Queensland, with its well-established connections with PNG.

The resulting benefits will go far beyond the income returns to the individuals involved. The public benefits will be huge for Australia and our neighbours, by building deep ties at personal, family and community levels.

Note: This blog corrects an earlier Devpolicy blog from 2017, ‘First in class: PNG student migration to Australia’, that overstated the extent of Pacific and PNG participation in education in Australia. That blog has now been retracted.