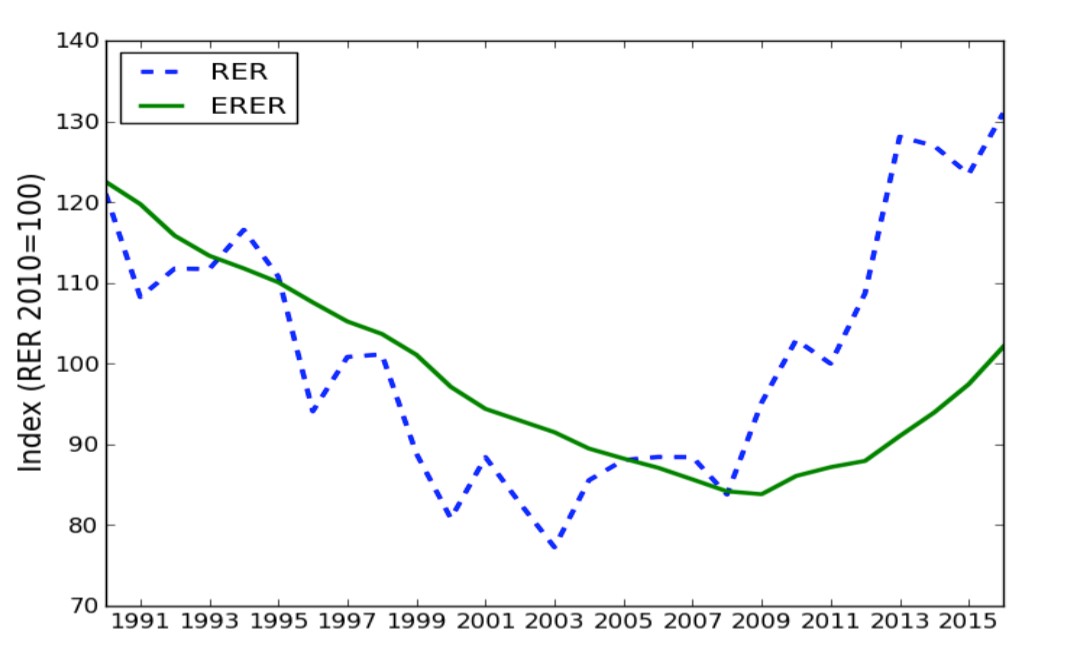 This blog post outlines the findings of our new Development Policy Centre Discussion Paper in which we estimate the current degree of misalignment in PNG’s real exchange rate (RER). The RER is defined as the relative cost of tradable in terms of nontradable goods (expressed in domestic currency terms). It is thus a key relative price for any open economy.

PNG’s resource boom has come to an end. Theory suggests that when this happens, the RER should depreciate. However, the kina has depreciated less in comparison to the currencies of many other resource-dependent developing countries. In addition, foreign exchange reserves have fallen from US$4 billion in 2012, to around US$1.7 billion in 2016.

Yet this release of reserves has not sated demand at the current exchange level. In response, the Bank of Papua New Guinea (BPNG) began to ration foreign exchange. Reportedly, the excess demand for foreign currency is about US$1 billion and rising. The rationing has led to a sharp fall in imports in 2015, which reflects the increased difficulty of PNG businesses to source crucial capital goods and intermediate inputs from the rest of the world.

Why is the exchange rate overvalued?

Why did the central bank not allow sufficient real depreciation despite the clear signs of currency overvaluation? In addition to containing inflation and keeping imports affordable, an important reason for this is that the equilibrium real exchange rate (ERER) is unobserved.[1] This means that it is difficult for policy makers to know by how much, even approximately, the RER should fall. While estimates such as a 40% kina overvaluation circulate in the popular press, it is not clear what these are based on.

The purpose of our paper is to inform the ongoing policy debate about the extent to which the kina is currently overvalued. To this end we follow a theory-informed approach to formally estimate misalignment in PNG’s RER. In particular, we use the “single-equation approach”, which we deem the most reliable among the various alternatives. The method estimates the ERER as a function of a set of macroeconomic fundamentals such as, among others, the terms of trade, government consumption, and the net external position. We employ standard time series methods. The sample period is over 1980-2015. In the final step we compute the degree of RER misalignment on the basis of our ERER estimate.

Figure 1 below shows the ERER together with the RER over 1990-2015. From 2007 onwards, an unprecedented resource boom was the catalyst for a rapid economic expansion. As a consequence, the RER appreciated precipitously, which translated into an ever-growing RER overvaluation that continues to the present day.

Figure 2 plots the degree of RER misalignment over the same period. Since 2008, real overvaluation has been substantial, never below 12% and almost 30% at the highest level in 2012. In 2015, the last year of the sample period, PNG’s RER was overvalued by about 22%. For 2016, our projections indicate that the RER remains significantly overvalued at around the same level. While the kina has steadily lost its value vis-à-vis US dollar at a rate of about 1% per month since the beginning of 2016, this depreciation will likely be offset by the inflation differential between PNG and its main trading partners (7% versus 1.5%) as well as movements in the ERER fundamentals.

Our results also suggest that the period up until 1994 was characterized by prudential macroeconomic and exchange rate policy. During that time the ERER and RER did not significantly divert from each other implying that the degree of currency misalignment was small. In the following years this quickly changed, however, as fiscal deficits reached unsustainable levels, largely due to falling commodity prices and a sharp decline in foreign aid. In late 1994, the kina was devalued by 12% vis-à-vis the US dollar, which caused the RER to become significantly undervalued. In 1997 the Asian financial crisis and a severe drought adversely impacted on PNG’s economy, which resulted in another nominal exchange rate depreciation of 30% due to serious concerns about the country’s external position. Real undervaluation continued for several more years before the RER adjusted back to its equilibrium level in 2004. 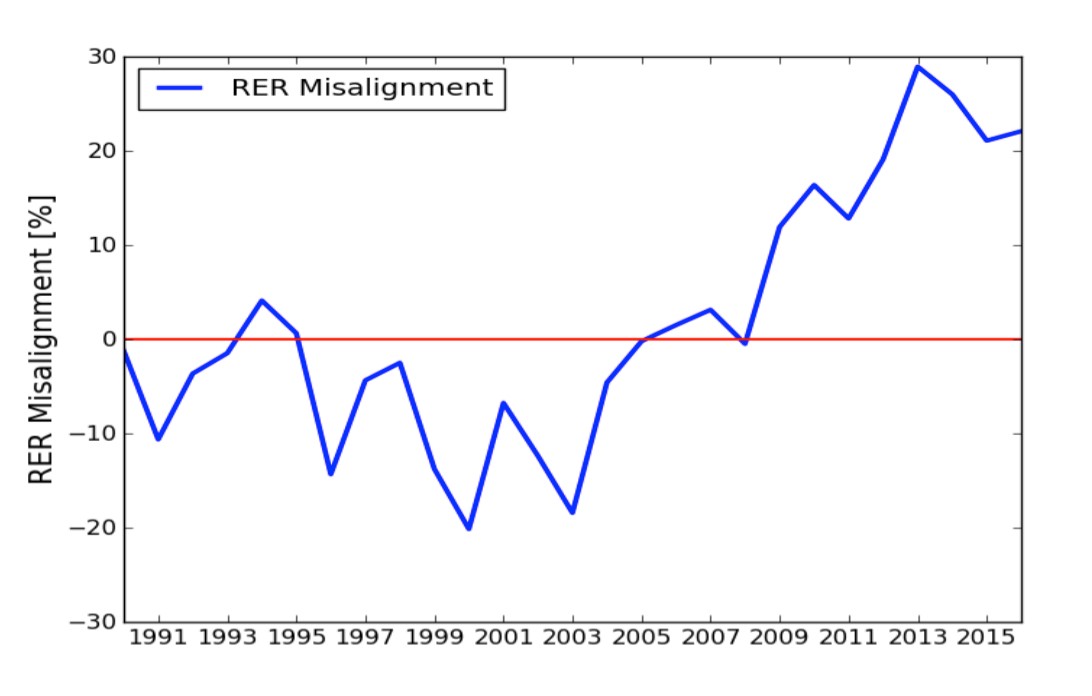 Our findings have important policy implications. The BPNG should devalue the kina by about 20% in order to restore internal and external equilibrium. Otherwise PNG’s population is likely to pay high economic costs. There is ample empirical evidence that RER overvaluation leads to lower economic growth through resource misallocation. Moreover, the empirical record in Latin America in the 1970s and 1980s suggests that foreign exchange rationing is an ineffective tool to maintain the exchange rate and international reserves, as black markets will eventually develop. Parallel markets entail additional economic costs as they encourage rent-seeking behavior and worsen the fiscal position due to lower seigniorage and tariff revenues. Ultimately a currency crisis might ensue as economic agents are incentivized to divert export receipts away from official channels. It is in the hands of the central bank to prevent such costly and harmful outcomes.

Rohan Fox is a Research Officer at the Development Policy Centre. Marcel Schröder is a Lecturer in Economics in the University of Papua New Guinea School of Business and Public Policy, under the ANU-UPNG partnership.

[1] The ERER is defined as the value of the RER which attains both internal and external balances, taking as given sustainable values of all the relevant variables. Internal balance prevails when nontradable good and labor markets clear. External balance refers to a situation where the country’s external position is on a “sustainable” path.