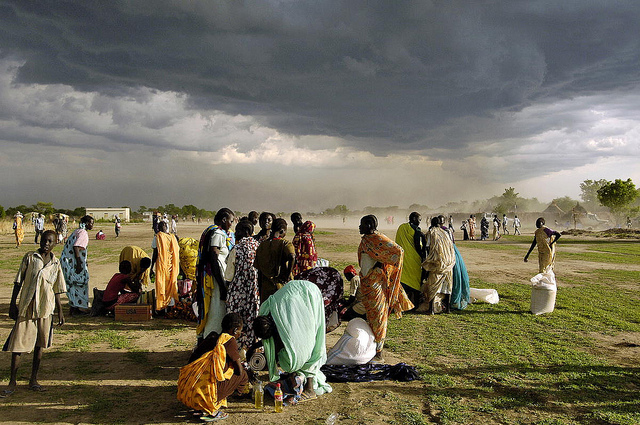 On World Humanitarian Day 2015, global statistics paint a grim picture. Last year 107 million people were affected by natural disasters, up 10 million from the previous year, and numbers are likely to grow as extreme weather events become more severe. Conflicts are becoming more brutal, forcing ever more people from their homes. The number of people forcibly displaced at the end of last year, at 60 million, was the highest ever recorded.

The amount of funds requested through UN-coordinated appeals last year was the highest ever recorded. Humanitarian aid was also at an all-time high, but was still vastly insufficient to meet the unprecedented need.

With current humanitarian crises showing little hope of abating, an inevitable increase in extreme weather events, and humanitarian funding already at a record high, where to from here? Can donors continue to give more and more, as needs spiral higher and higher? In Australia, where the aid budget has just faced its biggest ever cut, this is unlikely. It’s equally unlikely in other parts of the world, where governments are already giving more generously than ever before.

What we can do, though, is ensure the aid we give is used as efficiently and effectively as possible. How aid is given – who is funded, for what, and how – matters enormously. And in this context of burgeoning need and tightening purse strings, there are three things in particular that can be done much better.

First: the distribution of humanitarian aid is often inefficient. By far the majority of international humanitarian aid goes in the first instance to UN agencies, who generally do not deliver programs themselves, but engage NGOs as sub-contractors to deliver programs for them. Where international NGOs are involved, often they, in turn, sub-contract to local NGOs. In 2014, less than 20 per cent of humanitarian aid went directly to NGOs, and less than 1 per cent to national or local NGOs. With overheads retained every step of the way, the sub-contracting process costs millions of dollars every year.

Second: there is a vast resource base that is scarcely tapped for humanitarian aid. In 2014, 76 per cent of humanitarian aid was given by government donors. But there is a vast array of other actors – diaspora, the private sector, private individuals – with enormous potential to respond to humanitarian needs, but with whom we fail to adequately engage. It’s estimated that in 2016, remittances to developing countries will reach $540 billion [pdf]: 27 times the amount of assistance requested through humanitarian appeals so far in 2015 (p. 4). With some out-of-the-box thinking, and assisted by available technologies, we could do a much better job of recognising and harnessing this potential to ensure the best possible response to humanitarian needs.

And third: we can do so much more to prepare for and mitigate the impact of extreme weather events before they occur. There are countless examples affirming that action taken at the right time to build resilience and reduce disaster risk saves money as well as lives. To provide just one example: after the flash flooding in Solomon Islands in 2014, communities that had been supported by Save the Children to plant food gardens on hillsides away from flood-prone areas continued to reap crops despite the devastation wrought by the floods. None of them received any humanitarian aid, and three months after the floods they said they’d fully recovered. Other communities lost all their food gardens, required significant humanitarian aid, and said they’d need between one and three years to recover. It cost Save the Children less than $500,000 to support 63 communities to reduce their vulnerability to floods; the Australian Government spent $3m on the response.

On the other side of the world, studies have repeatedly affirmed the cost effectiveness of taking early action to mitigate the impact of slow onset food crises. Research following the food crisis in West Africa in 2005 [pdf], for example, found that tackling acute malnutrition in children at the peak of the crisis cost 80 times more than it would have to prevent malnutrition nine months earlier.

The point is that failing to act early to mitigate preventable and predictable crises (like food crises), and failing to adequately invest in reducing the risk of natural hazards like floods, earthquakes and tropical storms, costs millions of dollars. And with humanitarian needs so vastly exceeding donor capacity to respond, it’s a scandal we’ve not got this right.

The outlook for humanitarian responders in 2015 is indeed frightening, but it’s also a time of opportunity. Next year will see the first ever World Humanitarian Summit, a once-in-a-generation opportunity to agree new ways of working to more effectively meet today’s challenges; and domestically, the Australian Government is developing a new humanitarian strategy and exploring new partnerships. With Australia’s aid budget at a historic low and humanitarian need at a historic high, these are opportunities we can’t afford to miss.

Rebecca Barber is Humanitarian Policy & Advocacy Advisor at Save the Children Australia.

Rebecca Barber is an independent consultant in the humanitarian sector and PhD candidate at the Asia Pacific Centre for the Responsibility to Protect, University of Queensland.