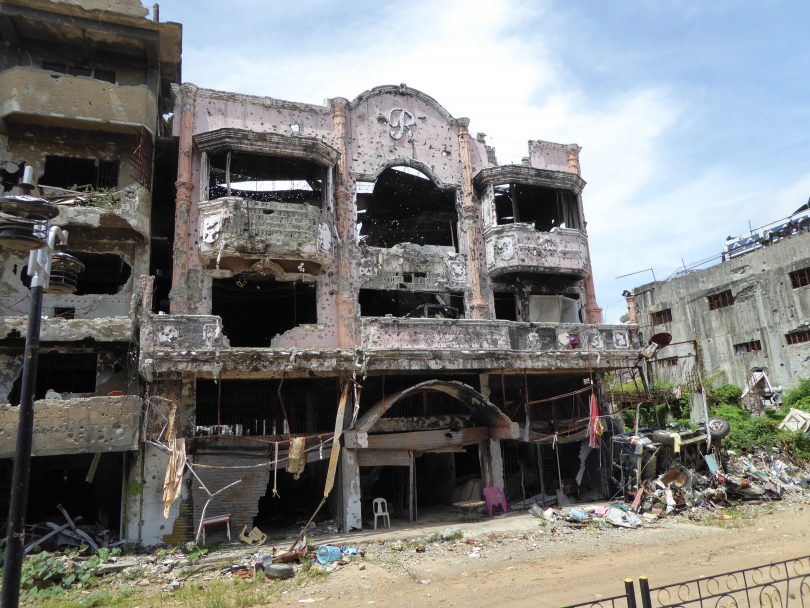 The impacts of an urban siege in 2017 in Marawi in the southern Philippines, where extremists were aided by social media (Adam Burke/The Asia Foundation)

In 2017, residents in Khon Kaen, Thailand, filed a petition to stop a Muslim community from registering a recently constructed mosque, citing fears of violence. A Facebook page declared that the petitioners, who were Buddhist, opposed the construction because it impaired traditional values and peace. Several months later, a Buddhist monk proclaimed that Islam was the enemy of his religion, and urged Buddhists in Thailand’s conflict-affected southernmost provinces to band together and destroy mosques.

Neither of these efforts achieved their aims. The movement against registering the mosque made limited progress and had no significant government support, while the monk was taken into custody and later disrobed.

Similar tensions manifested differently in neighbouring Myanmar, another Buddhist-majority country in Southeast Asia. From 2012 to 2014, religious and nationalist hardliners orchestrated a series of campaigns against Muslim minority communities. After building support by harnessing local networks and social media, and claiming to protect the Buddhist nation against an existential threat, they instigated attacks on Muslim communities in several cities. They also supported a wave of violence in Myanmar’s Rakhine State, during which gangs burnt down entire neighbourhoods and an estimated 1,000 people were killed. In most of these cases, the police and military failed to intervene effectively.

Later, in 2016 and 2017, military campaigns in Rakhine State led to the flight of more than 600,000 Muslim Rohingya into Bangladesh. The UN human rights chief described it as a “textbook example of ethnic cleansing”.

So why did Thai authorities act swiftly to ease tensions while their counterparts in Myanmar did the opposite? Superficially perhaps, one government seemed to be better than the other at upholding public order. However, a closer analysis of these events shows a much more insidious pattern, with some leaders in Myanmar actively seeking to foster sectarian tensions by polarising identity groups along religious fault lines.

Identity-based tensions have risen across the region at a time when concerns over violent extremism have made it easy for agitators to present local Muslim communities as a threat. Myanmar has experienced intense violence, but activists have also instigated attacks on Muslim communities in Sri Lanka and in India. In both countries, security forces were accused of responding too late, and nationalist politicians were blamed for inciting violence.

Seeking popularity and support from the majority by identifying and blaming a minority is one of the oldest political tricks, and has assumed a new lease of life in the past few years. Deep-seated social and political divisions have become inflamed in many countries across Asia, while growing expressions of ethnic nationalism are evident as majoritarian political forces have both aggravated divisions and eroded democratic institutions. Most Asian countries have diverse populations, and their governments continually face the persistent challenge of maintaining stability across ethnic or religious divides. The varied responses to communal tensions typically indicate the willingness of at least some leaders in each case to build support by playing dangerous identity games.

In a recently released book, The Asia Foundation looks to recognise and explain trends of violence across the region. The State of Conflict and Violence in Asia 2021: Identity-based conflict and extremism presents a set of short essays from expert contributors, followed by summaries of conflict patterns in 10 Asian countries.

In his essay, Polarization, power, and the pandemic: new drivers of conflict in Asia, Michael Vatikiotis finds that competitive domestic politics repeatedly play to and exacerbate ethnic and religious tensions, enabling the spread of traditional ideas of nationalism and identity. Amid rising majoritarian tendencies that feed off deep-seated social divides, Vatikiotis finds that long-established checks, balances and norms of political pluralism have been undermined by the populist assertion of ethnic and religious primacy and by authoritarian leadership. Religious fervour has risen among those of all faiths, stemming from greater social and economic inequality or insecurity, and aided by the retreat or defeat of secular ideologies other than nationalism. These trends coincide with a reduction in Western support for liberal activism and intervention overseas, while China, increasingly affluent and active, offers an alternative approach and a ready source of funding.

Sidney Jones, in her essay on identity conflicts in Southeast Asia, flags three contemporary factors behind a rise in tension. First, the role of violent religious extremism, a term no longer applied solely to jihadist movements. ISIS inspired a small yet significant minority of Muslims in Southeast Asia to back movements towards Islamic forms of government, while its regional legacy altered the dynamics of violent extremism, increased anti-Muslim sentiments among some non-Muslim communities, changed security policies, and shifted foreign aid priorities. Second, the rise of populist, majoritarian movements in Southeast Asia. Deeply nationalist, they have been driven by a fear that the majority’s privileged position was under threat from minorities—religious, ethnic, and sometimes sexual. Feeding off frustrations over unequal growth and access to opportunities, these movements have been particularly lethal when backed by governments or influential political parties. Third, Jones identifies long-term and growing strains between migrants and ‘indigenous’ peoples, particularly over land and resource issues. Domestic migrants are often seen by host populations as a feature of central domination, especially in areas where the state is deeply resented. Variants of this pattern are seen across the region, where conflict has been exacerbated by hardening divides along identity lines.

In a final essay of The State of Conflict and Violence in Asia 2021, three regional specialists on the impact of online technology, Maria Ressa of Rappler, Sanjana Hattotuwa and Sarah Oh, explain how social media have fuelled both polarisation and authoritarianism. Governments across Asia, meanwhile, routinely seek to manipulate online information, and internet users are fed news through a combination of algorithms that maximise advertising revenues and push users towards self-affirming echo chambers. Regulations and legal frameworks are unable to manage the ways in which news and information are spread and consumed online. Addressing this protracted crisis requires action at several levels, to build mass online literacy and foster local responses. Both offline action and online responses are needed, while improved regulation of social media typically requires action by many different stakeholders, from international organisations to the grassroots.

As economies continue to grow, and governments continue to build their capabilities across much of Asia, this diverse set of contemporary factors will continue to generate friction between identity groups. The perennial task of maintaining tolerance and managing tensions in the region’s plural societies remains as critical as ever.

Read The State of Conflict and Violence in Asia 2021: Identity-based conflict and extremism.

Listen to Adam Burke discuss The State of Conflict and Violence in Asia 2021.

Adam Burke is The Asia Foundation’s Director of Conflict and Fragility. With almost 20 years of experience as a researcher and practitioner working across Southeast and South Asia, Burke is a specialist in conflict prevention, peacebuilding and development.