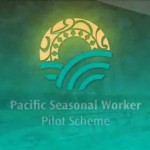 Anna Berry runs Pasifika Resources, a labour-hire company in the Riverina. She has been working in the horticultural sector for the last ten years, and has been following the Pacific Seasonal Worker Program (SWP) since its inception as a pilot in 2008.

Stephen: Perhaps you can start by telling us about your background.

Anna: I was born in Vanuatu. I came to Australia, and I’ve lived here for 40 years. I’ve worked  in factories, and on the farm. I’ve picked fruit. I’ve packed fruit. I did everything that you could think of.  Anyway, eventually I got to the management level. I worked for Summit Personnel, an employment service. Five years ago, I started my own company, my own recruitment service, Pacifica.

Stephen: Why do you think there isn’t there more demand from farmers for Pacific workers?

Anna: The farmers won’t pay. You know why? Because there are so many illegals here. I have been dealing with this for 10 years. I don’t know how you are going to get rid of them.

We just finished the navel season. We picked 36,000 bins of oranges with backpackers. But my contract is with 10 farmers only. I’ve got 200 farmers on my books. We couldn’t touch them. They came to me and I said, well, the price is this. And they said, no, we can do it cheaper than that. They are paying cash, for $19 a bin. The ones who use us pay $37 a bin. To pay your workers properly, and super, and workers comp, and GST, you’ve got to charge $37. So the farmers prefer to pay the $19 cash.

But at the moment, they have got choices. I have my 10 farmers. They know we do a good job. And I’ve worked with these people for 10 years. But if I walked away, I reckon they would go back and take illegal workers.

Stephen: Who supplies the illegal workers?

Anna: There are so many the contractors around here that supply illegal workers. And even the farmers themselves take them. Now we have got onion season coming up. It will be starting this month. And you know, there will be illegal workers in the field. Most of the workers in the onion field are illegal.  Maybe the whole lot of them.

Stephen: Are they mainly Australians or foreigners doing the illegal labour?

Anna: Foreigners. Chinese, Vietnamese, Indian, you name it. Paid in cash. Up to last year, we did onions. But the farmers said, we’ll pay you cash. And I said, No I don’t want cash. I want  to run the whole thing properly. They said, No, you will accept cash, or you don’t do the onions. So, now I am off onions.

If we get rid of the illegal workers, you will see farmers crawling to the seasonal worker program. I am telling you because I live with it everyday. Nobody does anything about it.

Anna: Yeah. I have reported some.

Stephen: Did the police come and do anything?

Anna: They came and somebody told the workers and they ran away.  There are so many illegal contractors here in Riverina area. That’s just in our little area, what about in other big areas?

You’ve got to realize there is a lot of money in picking. Not a lot of profits but a lot of cash-handling. For example, my cherry season goes for 8 weeks. We do 750,000 tons of cherries. And we have 250 workers to 300 workers. At the end of 8 weeks, we will walk away with a million dollars. That’s what attracts illegal contractors to the industry. They don’t declare their taxes. They take their GST and they run away with it.

People like us, we’re strangulated because by the time you do everything properly, you are left with almost nothing.

Stephen: Not many people are prepared to talk about the issue of illegal labour.

Anna: The farmers won’t give you the information.  But I have been in the industry long enough. And truly this carries on everyday.

Stephen: In your recruitment service, do you ever lose locals or only backpackers?

Anna: We mix the backpackers with locals. But we don’t count on the locals much. Because the locals can’t do it. There is no way. I tried every avenue to employ locals. They always have excuses. So it is another hassle. It’s a very tough world out here in the labor force. Every year we have the same problem.

Anna: I shouldn’t complain, because they are the only ones that we can use. But a backpacker controls his own destiny. He might say, I want only to pick only 1 or 2 bins, and he’s gone. Or they will only stay for one week. So if you  have a season for 6 months, well, then you change the staff all the time. It’s really terrible. But I understand. Seasonal work is not very friendly.

Anna: Definitely. We can charge seasonal workers at a lower rate than backpackers. Islanders can normally do 10 bins a day, probably more than that. An Australian or backpacker will only pick about 4 bins a day. Because it’s hard. It’s really hard.

Stephen: That is a big difference.

Anna: It is a big difference. For an Australian or backpacker it’s hard work. But for ni-Vanuatu, this is the everyday life. So, it is easy for them. It is just a breeze.

Stephen: So why don’t you use seasonal workers instead of backpackers?

Anna: When I put my application, DEEWR [the Department for Education, Employment and Workplace Relations], told me that I have got to have five years of returns. And that I don’t show enough profit, or have enough funds in the bank. If they had given me my license last year, I would have taken up to about 200-300 workers from Vanuatu or from PNG or wherever.

There’s just too much red tape. We can’t work with this. It’s dead. We have got to make it friendlier. It’s not just me. If we want the farmers to come on board, it’s got to be friendlier than what they have now. DEEWR should not be running the scheme. They should hand it to a private body, even to the farmers themselves. DEEWR should be a regulator, but not involved in actually running the scheme. It’s got to be someone who knows what farmers think.

So, these are the things I see. First, we have a problem with immigration, with illegal workers. Second, the scheme has too much red tape.

It is so different from New Zealand’s RSE [NZ’s Pacific seasonal worker scheme]. That scheme is so friendly. Vanuatu is being changed because of the RSE. But with Australian scheme, there is nothing.

The Pacific Seasonal Worker Program (SWP) allows growers and labour-hire companies to bring Pacific workers to Australia. For more analysis of the low take-up under the SWP pilot, see this Devpolicy post and discussion paper. For another industry perspective on the SWP, click here.  Other blogs in the Seasonal Worker Program series can be found here.

Anna Berry runs Pasifika Resources, a labour-hire company in the Riverina. She has been working in the horticultural sector for the last ten years, and has been following the Pacific Seasonal Worker Program (SWP) since its inception as a pilot in 2008.