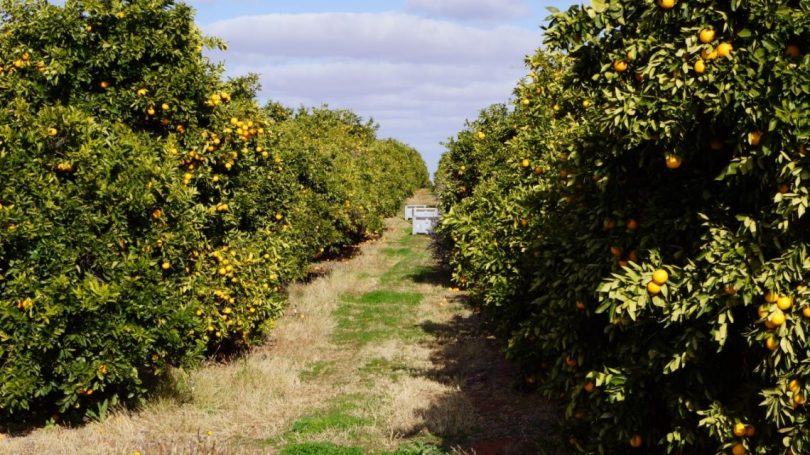 Close to 250 SWP workers from Solomon Islands were due to work on Australian farms this winter. (Credit Olivia Dun)

Australia shut its national borders to non-citizens on 20 March 2020 to slow the spread of COVID-19, an action which also halted the plans of numerous Pacific Islanders who were due to return to Australia under the Seasonal Worker Programme (SWP). Amongst those affected were close to 250 workers from Solomon Islands who were intending to travel to Australia under the SWP between April and July 2020. So far none of these workers have been mobilised.

In late 2019, part of our research under the Transformative Human Mobilities in a Changing Climate project involved in-depth interviews with 12 Solomon Islander SWP participants on citrus farms in the Sunraysia region of Australia. All 12 workers, who had spent six months in Australia, returned home to Solomon Islands in November 2019 with plans to return to the Sunraysia in May 2020. These workers saw the SWP as their primary employment, and the six months back home in Solomon Islands as time to invest in new business ventures and agricultural activities, spend time with relatives and friends, and prepare for their return to work in Australia for up to another five seasons. Telephone interviews with four of these seasonal workers, conducted in early May 2020, highlight the impact of Australia’s international border closures (in conjunction with Solomon Islands public health measures) on workers unable to participate in the SWP at this time. Below are some of their stories.

Since returning to Solomon Islands in late 2019, one worker, Ramsey, had been preparing to start two poultry farms in two different Solomon Islands provinces. Ramsey had begun negotiations to pay for the use of one hectare of land and had established a partnership with a nephew on a different piece of land (just under one hectare). However, on 25 March 2020, the Solomon Islands’ Government declared a State of Emergency and the Prime Minister Manasseh Sogavare, as one of six emergency orders, ordered Members of Parliament to encourage the repatriation of public officers, and members of the public in their constituency, from Honiara to their village. As Ramsey, who is currently based in Honiara, explained, ‘I’m ready to buy [500 poultry] but …this coronavirus thing has been interrupting my plans. So I couldn’t buy, because everybody’s going home’.

Concerns raised by Ramsey were echoed by another SWP worker, Cathy, a young single mother who has been looking after her child and other children of family members since returning to Solomon Islands in November 2019. She had begun constructing a new house with her 2019 SWP earnings but put that on hold when the labourers needed to return to their home provinces. Cathy had been looking forward to coming back to Australia in May 2020 and has had to find innovative ways to generate income now that she can no longer come to Australia to participate in the SWP. Since COVID-19 restrictions, she has newly registered to become an agent to facilitate purchases of electricity, water and telecommunications services. People in her neighbourhood can come to her to purchase prepaid top-ups of these services, rather than going into town.

Cathy was also thinking of drawing down on her Solomon Islands national retirement fund (usually only accessible at the age of 50). In an attempt to ease the economic hardships arising from the COVID-19 situation, the Solomon Islands National Provident Fund (NPF, the national social security scheme which provides retirement benefits to members and to which employers contribute) has allowed members to withdraw some of their money depending on circumstance. Cathy explained how what the ‘NPF did for us is quite good. People below age fifty years can withdraw five thousand [Solomon Island] dollars from their super fund. So that’s helping a lot of people now…. I was thinking of withdrawing five thousand dollars but then I still have second thoughts that I still want to keep it.’

Ramsey, Cathy and the other seasonal workers we spoke with remain very keen to return to Australia under the SWP. The Commonwealth Government announced changes to visa arrangements on 4 April 2020 to allow SWP workers and participants in the Pacific Labour Scheme (PLS) currently in Australia to remain in Australia and continue working for up to 12 months under more flexible conditions. There remain several issues to be addressed, however, before returning might be feasible for people who participate in the SWP/PLS and who are currently in their home countries

In other parts of the world there are examples of exemptions and additional health measures being made to allow migrant farm workers to continue to cross international borders despite COVID-19 travel restrictions being in place. The SWP, being a government-to-government managed migration programme, with objectives to enhance economic development in Pacific Island countries and Australia, should provide a unique platform for cooperation to allow for new measures, arrangements and support as necessary, at all tiers of the SWP’s operation and beyond, if new SWP workers are allowed to enter Australia despite the COVID-19 pandemic restrictions. SWP worker safety and wellbeing would have to be the top priority guiding any travel exemptions put in place at this time, with extra safeguards put in place to avoid any new vulnerabilities arising once they are in Australia and upon return home.

Olivia Dun is a Research Fellow in the School of Geography, The University of Melbourne. She has a background in environmental science, migration studies and international development.

Celia McMichael is a Senior Lecturer in the School of Geography, The University of Melbourne. She is a social scientist and health geographer with a research background in migration, displacement and resettlement.

Fanny Thornton is Assistant Professor of Law at the University of Canberra. Her research and teaching focus on public international law, refugee law, human rights law, and climate law.