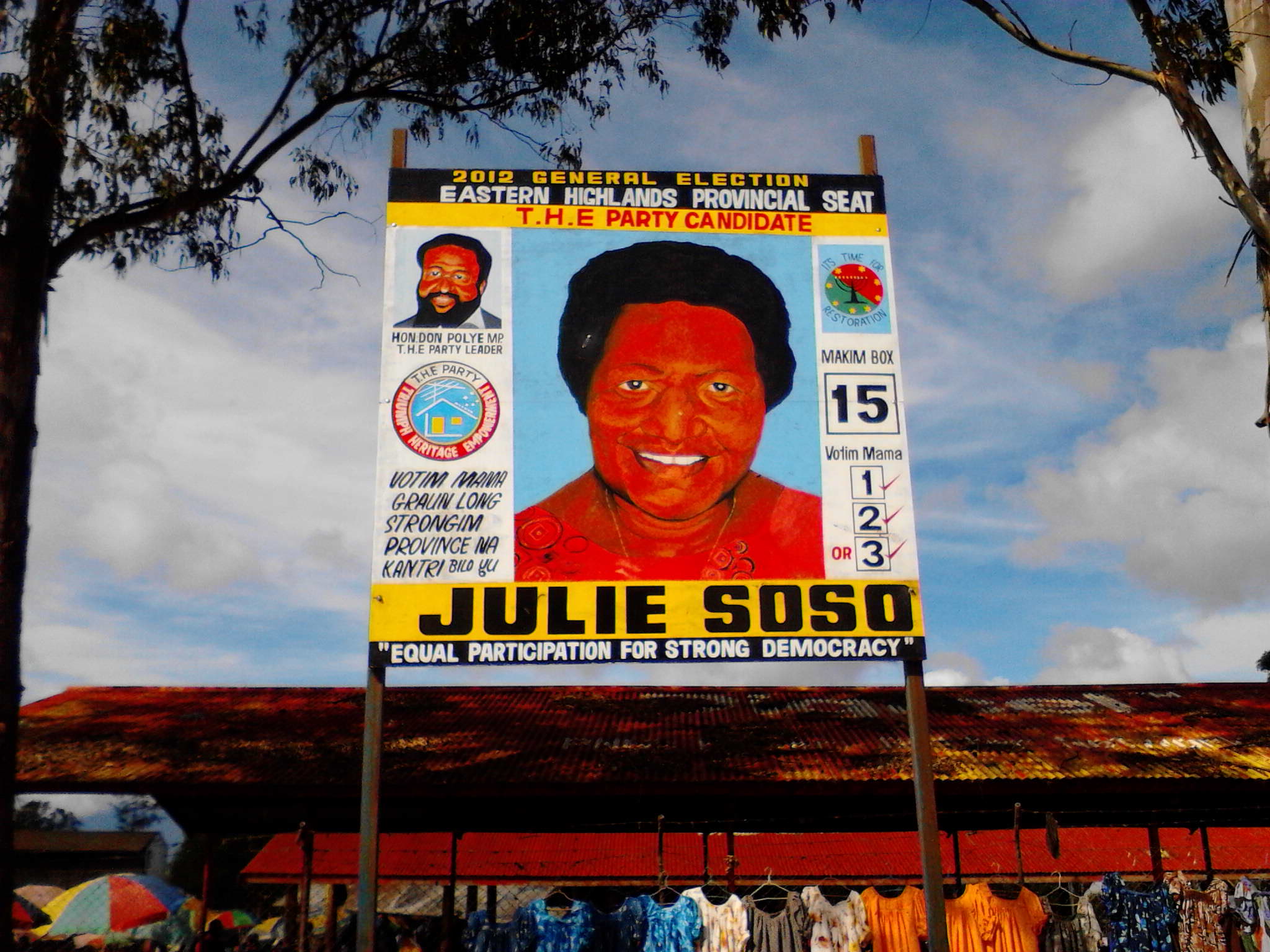 August 6, 2012 felt like a watershed moment for PNG politics; this was the date that Julie Soso Akeke was declared the third woman elected to parliament in that year’s national election, and the first to ever hold a seat in the PNG Highlands region. Her election, along with Delilah Gore and Loujaya Toni was never assured. Indeed, many in PNG feared that with the retirement of Dame Carol Kidu, at the time PNG’s sole female MP, it would be a long time before another female MP stepped into Haus Tambaran (Parliament house). This against-the-odds effort was a small but important victory.

In this blog we look at why supporting women’s attempts to get into formal politics in PNG is important, how one female MP (Soso) came to power, and what her success means for donor efforts to support female candidates.

Judging from PNG statistics, support for women candidates is long over due. The election of three women in 2012 was, along with the 1977 election, the highest number of women ever elected to parliament since the first general election of 1964. Papua New Guinean women now make up only 2.7 per cent of total MPs. This figure is less than the 3.7 per cent average across the Pacific (excluding New Zealand and Australia) – a region with the lowest rate of women’s participation in formal politics in the world.

Increasing female participation in formal politics has flow on effects that can help raise women’s status. According to the 2012 Women’s Political Participation Report Asia-Pacific [pdf], in New Caledonia and French Polynesia reserved parliamentary seats for women have helped secure resources targeted at improving women’s well-being, and has positively shaped debates about female leadership. While we acknowledge the often controversial nature of the issue of reserved seats for women, the report nonetheless suggests that female parliamentarians are often better placed to promote women’s rights.

In PNG, female politicians have been at the forefront of raising awareness about the challenges facing women. Dame Carol Kidu has been a tireless campaigner for social issues, with a particular focus on women’s rights. It appears that newly elected MP and Governor of the Eastern Highlands, Soso, has continued on with Kidu’s concern about raising the status of women – albeit in her own way (unlike Kidu she disagrees that women should have reserved parliamentary seats). At a recent seminar at the Australian National University, she outlined a number of initiatives that she hopes will improve the status of women in the Eastern Highlands.

The importance of female focused initiatives cannot be understated. According to the UNDP’s Human Development Index PNG has not improved gender equality over the past decade. Women suffer from poorer health, education and labour market outcomes than males.  As highlighted by recent media reports (for example, here and here), they can also be the victims of terrible violence.

How have women broken through? Learning from Julie Soso Akeke’s success

As Jo Chandler powerfully illustrates in a recent article for the Griffith Review, without money, status, education and security women candidates find it difficult to attract a supporter base. Chandler also highlighted the violent backlash that women often face when speaking up or taking on non-traditional roles.

It took Soso a long time to overcome some of these challenges: she ran unsuccessfully as a candidate three times before her success in 2012. In her opinion, there were a number of local and external factors that assisted her election. One of the main local factors was the limited preferential vote (LPV) system, introduced in the 2007 election. In 2012 Soso was behind after the first few rounds of counting but won due to second and third preferences. This highlights the benefit of LPV to candidates that enjoy broad support in the electorate, but would not receive enough primary votes to win outright under a first-past-the-post system. For the many women candidates who cannot afford to compete in the common practice of vote buying, LPV offers a better chance of success.

Soso said her good family name (she comes from a prominent Eastern Highlands family) and her Christian values helped, as did her campaign strategy to improve the state of health, education and roads if elected. She said that people in her electorate had become disenchanted by state service delivery under male leadership and were open to change.

According to Soso, external support from the UNDP’s Practice Parliament (PP) training and the Centre for Democratic Institutions’ (CDI) inaugural PNG Women Candidates Training Strategy (WCT) also helped her electoral prospects. Both training programs were organised by the PNG Office for the Development of Women, with the WCT funded through the Australian Aid Program. The training was open to all PNG women (and their campaign managers in the case of WCT), although limited positions in each program restricted numbers (58 for the PP and 74 for the WCT). Successful female MP Loujaya Toni also participated in the training, although Delilah Gore did not.

How can donors support female candidates in the future?

There is an array of factors that impact on women’s electoral chances in PNG, and from Soso’s presentation it appears that many may be beyond the scope of donor interventions. But the WCT program shows how donors can make a difference. According to CDI Program Manager, Luke Hambly, the program was successful because it responded to demand from female candidates. Rather than trying to recruit women into politics, the program supported women who were already interested in becoming candidates, he said.

Hambly also stressed that the WCT did not promote a particular policy agenda. Instead it explored how women could practically respond to the difficulties of standing for office and campaigning in PNG. The program showed women how to enrol as a candidate and identify their constituency. Acknowledging women’s limited financial resources, it highlighted the importance of efficiently raising money and using it well. The WCT also provided strategies for meaningfully engaging constituents as opposed to buying their vote.

Last year the Australian Government announced $320 million over ten years to support gender equality in PNG and the Pacific. The Pacific Women Shaping Pacific Development strategy flags support for female candidates and the creation of reserved seats for women parliamentarians. This funding is welcome, however, the complexity of the problem and potential for backlash against these programs cannot be understated. According to Chandler, PNG academic Dr Orovu Sepoe has said that foreign assistance has resulted in widespread accusations of neo-colonial cultural interference. Still the example of the WCT program shows that engagement with women candidates can support internal demand and avoid imposing a policy agenda.

Expanding programs like the PP and WCT must be done with care. Properly evaluating their impact on the number of women candidates will be an important next step. Examining the potential for these projects to expand beyond focusing on national elections is crucial. Such programs could provide much needed support for women in the Local Level Government (LLG) elections to be held this year. Greater gender equity at this level is important both because of the vast increase in devolved funding to lower government levels, including LLGs, and the need to provide a stepping stone for women who might run for a seat at the national level in the future.

PNG does not have reserved seats for women (a bill to introduce 22 reserved seats failed to gain sufficient political support prior to the 2012 election, and has lost support since) and women only made up 4 per cent of candidates in the 2007 and 2012 elections. These factors make supporting female participation in politics all the more important. It’s critical that Papua New Guineans provide leadership on this issue – as many are already doing. These efforts should be supported by donors, but they must tread carefully.