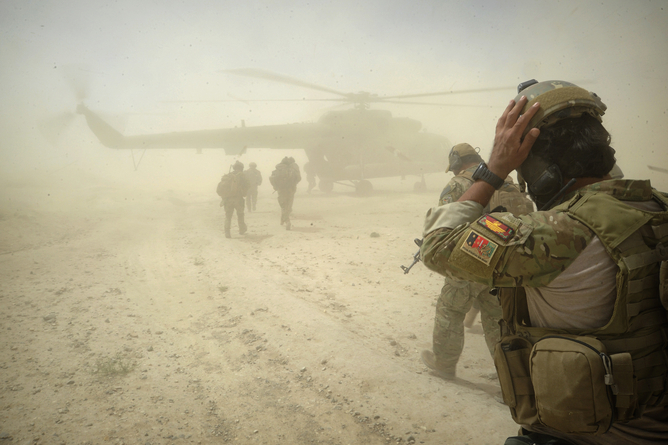 Iraq is the canary in the coalmine for the Western state building effort and as such should not be forgotten in discussions on what lies ahead for Afghanistan.

My last trip to Iraq, a quick foray to catch up with friends and see how the country had progressed was in 2010, just as the last American soldiers had packed their bags and shipped out. Thoughts from that visit come to mind as our attention focuses on the future of our involvement in Afghanistan after the planned departure of Western troops.

Iraq remains an image of contradictions. Vibrantly alive, looking towards a potentially bright future and yet tragically paralysed, mired in patronage politics. While the politicians squabbled for eight months over forming a government following the 2010 elections the people continued to go about rebuilding lives lost to decades of oppression and war. The machinations that continue to play out in Baghdad (and equally in Kabul) over the personally enriching cabinet positions, lucrative contracts and comfortable foreign appointments are seen as distant and irrelevant to the daily lives of the people not affiliated and dependent for their livelihood on a particular party or tribe. Few of my friends in Iraq had much to say about politics and the politicians; instead they talked about their future as if the two were of a different time and place, disassociated from one another. This disassociation is at the root of the challenge that faces both countries. No matter how many schools are built, kilometres of roads constructed or government institutions established, without an engaged populace the future will be bleak.

Reports of life returning to the streets of the towns in Uruzgan province, improving human development indicators and better security metrics can be heartening changes (if accepted on face value), but the evident disconnect between the politicians and the people should be read as an early warning sign of troubled times ahead. Afghanistan’s sustained development and the hope of achieving the original goal of the country becoming a peaceful and responsible international player requires more than money and resources, which has been the strategy to date. Unless the elected are held accountable by the people (not the international community), who are vested with an interest to participate in the process of governance, then the already stark divide between the interests of the individuals in government and the governed will only grow larger with tragic consequences.

Today’s challenge for Afghanistan’s international partners, including Australia, is to ramp up our focus on ensuring that the amount of democracy supplied, which we have done extremely well on, is met with an equal amount demanded by the people, for which we have fallen short. An imbalance in either direction can undermine stability. The myriad of elections that have been held, long list of legal reforms enacted and new government institutions established by donor aid money only serve the elite when there is a limited grassroots counterbalance. Building this demand for democracy and good governance is a crucial aspect of development, yet largely forgotten in Iraq and Afghanistan (the Community Action Program and the National Solidarity Program, respectively being the exception). Our rush to structurally recreate foreign countries in our own image has blinded us to the convoluted and often precarious journey that Australia took in developing an understanding of the obligations and expectations of the governed and the government.

This is in part as a result of the militarization of state building [pdf] and our consumerist conception of progress in which the quantity of goods and services provided, largely from behind security walls and concertina wire, is seen as a fair measure of success. But building a stable society takes more than material development; it requires the intangible and hard to measure concept of establishing a social contract. In Iraq and Afghanistan, through the process of focusing on ‘delivering’ aid we’ve created a skewed social contract full of expectations without any obligations. The government provides services without a sense of obligation to the people and the people accept these services without any obligation to the country.

When I met with the governor of the Iraqi province of Najaf in 2010 he was quick to tell me that one of the priorities for international organizations in Iraq is to help train people in civics. To help them understand how to ensure their voices are heard and to lobby for change in a constructive, not destructive manner. These are wise words that we would be well advised to heed but they require an acknowledgement of the inadequacies of our current approach and an overhaul of the mechanisms by which our aid is being delivered.

If the state building endeavour in Afghanistan stumbles, as it appears to have, people will then blame democracy for their ethnically fractured and religiously fraught politics and the constant inaction and infighting. They will then further withdraw from their social contract obligations as citizens, reluctant to demand representation or to hold their government accountable leaving a corrupt and self-serving clique of leaders. Why should the people risk their lives for something that only enriches the elites? Unless more attention is paid to the intangible and difficult to measure concept of a social contract by empowering the people to counterbalance an already empowered government that we enthroned then we’re unlikely to see an Afghanistan worthy of the tens of thousands of lives lost in the name of democracy for many decades or even generations to come.

Denis Dragovic headed humanitarian and development programs in Iraq for three years and continued to consult on United Nations development projects for another two years. He has in addition participated in the state building processes of East Timor and South Sudan and is currently completing a doctorate on Christian and Muslim theologies of post conflict state building at the Centre for the Study of Religion and Politics within the School of Divinity at St Andrews University, Scotland.