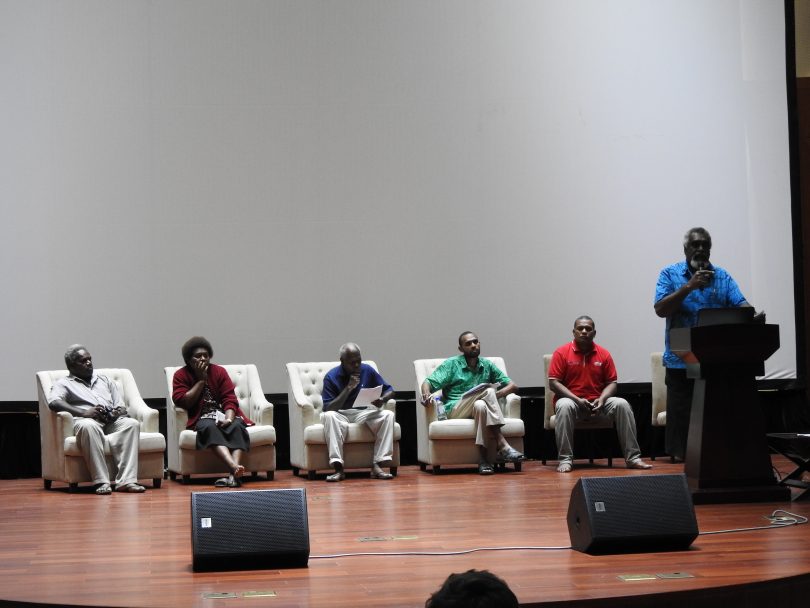 A panel organised by the Vanuatu Council of Trade Unions at the Vanuatu Labour Summit (Credit: Matthew Dornan)

Last month, on the sidelines of the Vanuatu Labour Summit, I caught up with Lionel Kaluat, the former Labour Commissioner for Vanuatu. Lionel is widely viewed as having been instrumental in Vanuatu’s early labour mobility success, which saw Vanuatu become the main provider of workers to New Zealand horticulture under the Recognised Seasonal Employer (RSE) program. I asked Lionel both about those early successes, and about recent changes to Vanuatu’s labour sending arrangements.

Matt: Lionel, you were Labour Commissioner when Vanuatu – quite against expectations – became the largest provider of seasonal workers under New Zealand’s Recognised Seasonal Employer scheme. What do you think was behind that success?

Lionel: Well, I believe the success story of how Vanuatu came to lead in New Zealand was basically because of the structure that we had right in the beginning which complemented New Zealand government policy.

And I think the beauty of the RSE program in the beginning was that New Zealand made sure that their backyard was cleared up, that the illegal workers were dealt with before the program commenced —I always repeated to Australia to follow that example.

That was one of the reasons for RSE success: we started off with clear ground.

I then introduced a policy where we would not be reliant on the government as [an] agent, but where we would privatise the program by engaging agents, to ensure that there was no political interference. That was instrumental to that early success.

That allowed a transparent [and] accountable system to work, and we did so by trialling out the first 104 workers in a pilot. And the pilot proved successful.

Through that, employers in New Zealand found that our workers were reliable, competent. That’s how we first developed a trademark, or trade name: we are reliable workers, we can work eight hours a day, we are healthy, physically and mentally fit.

I believe that once you do things right in the first place, you will always be right. So, we are very, very proud, and very glad that we actually had it on the right track right in the beginning.

And another good thing was our partnership with the New Zealand authorities. We were monitoring, providing advice, and making sure that things were done right in the first instance.

Matt: And it’s been, what? More than ten years since then? How do you think Vanuatu is going now in terms of labour mobility and its participation in the RSE and Australia’s Seasonal Worker Program (SWP)?

Lionel: Well, they are market-driven programs. So, as years come by, the numbers dictate the growth of Vanuatu’s participation. So, Vanuatu’s still leading the table. But to ensure that we sustain and continue to grow, we need to make sure that the policies that have been put in place right in the beginning have to continue to be sustained.

There can be some adjustments and amendments done, but the foundation of that policy has to be maintained. Because I think that is why we were successful. If we start to change things and do it too differently, I think it will really impact the program negatively.

One example is how we came about to license labour hire agents. During my tenure in office, I ensured the number of agents (who recruit workers in Vanuatu on behalf of Australian/New Zealand employers) was based on the demands of the employers. That is why in the case of New Zealand, we started off with 32 agents right in the beginning, and then we allowed that to drop off, and we eventually end up with only six agents providing workers to New Zealand – because of the direct recruitment of workers (without labour hire agents) by New Zealand employers.

With the new changes that have happened, with the licensing of many new agents, I hear that there’s about 20 agents providing workers to New Zealand, and 100 or so for Australia. And if we look at the Australian example, where there are about 46 approved employers, the market demand is just too small for 100 agents.

That doesn’t make sense. If we don’t manage this properly, then we risk developing a bad reputation for the country.

I really want to strongly emphasise and recommend to the government that there has to be close supervision of Vanuatu’s involvement in [the] RSE and SWP. And also very close liaison with the New Zealand [and] Australian governments. We need to make sure that the legal framework that has been established is fully enforced – that is the Seasonal Employment Act, which establishes a rigorous process through which new agents must be licensed.

Matt: And so, what’s behind the increase in the number of agents?

Lionel: I don’t have the answer. The Minister of Internal Affairs would have the answer. But the way I heard him talk this morning, in trying to respond to why he decided to increase the numbers, he basically said that he followed people’s requests to him, in which they convinced him that they have contacts (in Australia or New Zealand) already, and that they want to get their license.

Now I think we should be very, very careful. We have developed a system where labour hire agents have to apply to be licensed. There is a specific form that they have to use to apply. And that form does make mention that you have to be in business, you have to be business-oriented, you have to have a company name to sustain yourself. Once you apply, we have a special screening unit to issue — to do the vetting, and then also do the due diligence checks, and then it goes before a special committee which is made up of the labour commissioner, the superintendent of the Vila Central Hospital, the principal immigration officer, the police commissioner, and Director of Foreign Affairs.

I don’t know how we get 100 agents approved through that system. If they haven’t followed that procedure, then it’s already something that’s not working within the system. And like we heard in the conversation today, I am hearing from some of the agents that employers are already concerned about the big numbers of agents.

Matt: Over the last two days at the Vanuatu Labour Summit, we’ve heard a lot of conversations about the potential impacts of labour mobility on agriculture back in Vanuatu. And as a result of those discussions, there have been proposals from the Minister for Agriculture to require that workers plant 500 kava plants. There was also another proposal that there be term limits on the number of times that workers can return. What’s your view on those sorts of initiatives?

Lionel: Those are the right initiatives that we need. I actually already have those in mind, and they are outlined in a paper called “Reintegration and Returning Home Plan.”

So, I really welcome that sort of initiative. It should be something that is driven by the government. And I am pleased that the Minister of Agriculture realised how agriculture [in Vanuatu] could benefit from the program.

In my view, labour mobility can contribute to food security. Because if you can use all the skills that we have gained in horticulture, viticulture, and transform them into whatever food crops that we have back home, that translates into training individuals to become entrepreneurs, you empower the people in the community. And then you sustain a much better economy in terms of health, nutrition, education and finance. This is how I want to see things happen, to grow the whole economy.

Lionel Kaluat was formerly the Labour Commissioner for Vanuatu for fourteen years. He has since joined Bani Law in Port Vila, and is Executive Officer at the Vanuatu Information Centre.