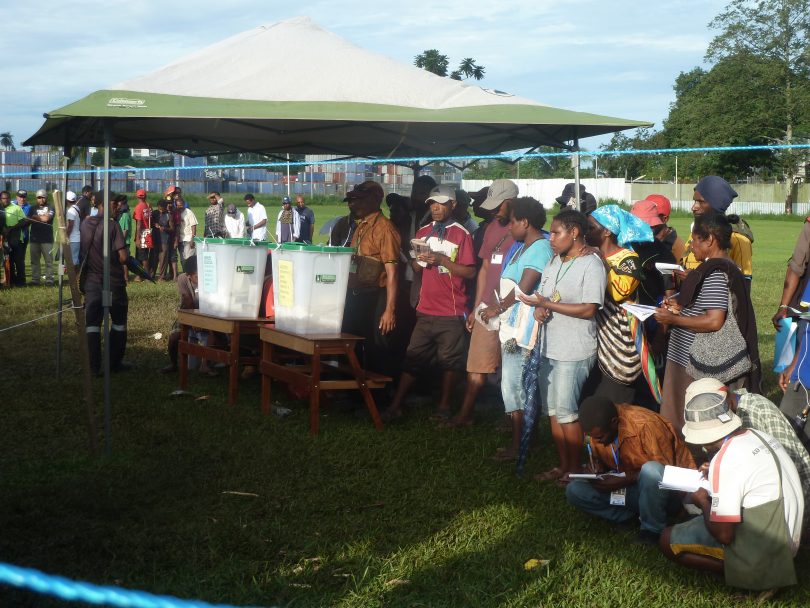 The prolonged vote counting in Papua New Guinea’s election provides a slight hiatus to consider political incumbency – the benefits of holding office and its potential disadvantages. Counting is complex and hazardous, subject to delays by staff and security forces demanding allowances. The scrutiny of each electorate involves thousands of transfers of preferences from losing candidates to stronger ones until one of the last few candidates garners a majority of the remaining live votes. Apart from possible arithmetical error by exhausted officials, it is a phase when deliberate fraud has occurred in the past (see pp. 19-20). Tensions can erupt in violence.

To date most controversy has centred on gaps in the electoral rolls denying people the vote, as noted by the Commonwealth Observer team echoing its 2012 report. Limited funding from successive PNG governments has for years prevented proper updating – voters deleted when their names had been sent to Election Commission headquarters. Some candidates perceive rigging by government, others unfairly have blamed Australian technical assistance for the state of the rolls, which is denied. Australia’s Minister for International Development and the Pacific is aware of reported ‘irregularities in the election rolls’ but adds ‘it’s not really appropriate for Australia to provide running commentary on the conduct of elections’, and ‘It’s really important that we develop productive relations with whoever the PNG people elect as their leaders.’

Predicting the next government is hazardous when in recent PNG elections roughly 60 per cent of sitting members were defeated. On average there are 33 candidates in each of the 111 seats. Most are nominally independent, though some have party links, and local contests are rarely about policies or political parties.

Parties do become important under the S63 of the constitutional integrity law because the party which has the most formally endorsed Members of Parliament (MPs) elected is entitled to the first vote to create a government by nominating its candidate for Prime Minister (PM). When the House first meets, after the Speaker is elected, the largest party must test its strength in a vote for the prime ministership. In 2012 Peter O’Neill’s Peoples National Congress (PNC) had 27 party-endorsed MPs. Unless the strongest party has 56 MPs, then – hypothetically – a majority grouping of other parties could vote against the largest party’s nominee, and then put up its alternate candidate.

As soon as electorates are declared party leaders work to attract a parliamentary majority, and the wealthiest have a real advantage because just after elections most new MPs are broke. Pangu Pati leader Sam Basil has pleaded with new MPs not to be bought off, saying their voters wanted them to remove the present government. Parties will use helicopters to pick up new MPs and gather them into separate hotels or ‘camps’.

Sitting members would seem to have massive advantages during elections, including staffers and good salaries. Their best known advantage has come from controlling constituency ‘slush’ funds now through the District Services Improvement Program (DSIP). DSIP grants grew rapidly after 2002 with Sir Michael Somare as PM and then again from 2011 after O’Neill deposed him. During the ‘windfall’ years of the mining boom until 2014 this simple technique helped PMs build parliamentary support and to avoid potential votes of no confidence. But out in the electorate these funds can be a mixed blessing for sitting MPs, especially if – as now – services are collapsing in many districts. MPs’ electorate authorities all now effectively control over K10m a year for their electorate districts. A recent report says only five have formally acquitted their 2016 funds. In the past some MPs retained funds until the final campaign, and then recklessly ‘dish out’ cash. ‘Money politics’ is a term borrowed from Indonesian studies but is now not new and is reported again in PNG, especially in seeking to buy minor preferences.

There are many spectacular cases where money hasn’t worked, as when the former Speaker, the late Jeffrey Nape, lost his highland seat in 2012. Too much money can harm a candidate. Unmatchable generosity can stimulate resentment, backfire badly on the donor and lead to accusations of corruption which are rife at election times. In 2007, another Chimbu MP distributed sums of K10,000 to many clans in much of his electorate, but he lost his seat. So wealthy men can and do lose. In recent elections candidates with business fortunes have tried to win by spending big and hosting non-stop partying at ‘campaign houses’, but the stagnant economy this year has apparently quietened the festival.

What is new in the 2017 election is the rise of social media – especially Facebook – with over half a million members. Lately the O’Neill government has joined the fray with what its critics call fake news, but despite the sillier swipes and tweets the social media arena has been held for years by well-informed critiques of the government performance. These analyses point to poor fiscal management, and focus on allegations of corruption.

PNG’s revenue crisis is now internationally obvious, long after rural people knew about services failing across the country – schools without books, seats or teachers, hospitals without drugs, roads and bridges collapsing in tropical downpours or earth tremors, and many state employees unpaid. So sitting MPs are easy targets, blamed for poor services by their many rivals. However the systemic problem is that legislators must now try to be ‘fund managers and service providers’. In today’s political culture PNG’s MPs are expected to play patronage with state revenues, but for every group which they benefit they will antagonise several others.

PNG’s social media coverage goes well beyond the scandalous stories seen on some sites, and has spread among the best educated younger people across the country. It remains to be seen whether they have utilised their shared critique of the O’Neill government to build a coherent political force which might deny parliamentary dominance to the O’Neill’s coalition. In early counting O’Neill has won his seat and his People’s National Congress (PNC) appears strong. It will again meet with allies in the coastal town, Alotau.

The informal Opposition coalition includes current Opposition Leader Don Pomb Polye’s Triumph Heritage Empowerment (THE) Party, Pangu Pati and the National Party. Recently they were joined by the relatively large and wealthy National Alliance – Somare’s party. This is led by O’Neill’s sacked Treasurer, Patrick Pruaitch, who is said to be Somare’s nephew by marriage. So far most of these parties have polled better than commentators expected, boosted by Somare’s symbolic presence, and the intellectual leadership of former PM Sir Mekere Morauta (who is also polling well). This group will need to cohere when they meet in the Highlands town, Goroka.

If the PNC emerges as the largest party when Parliament convenes, it remains to be seen whether the Opposition group can first persuade a majority of the new House to vote against O’Neill and, if so, then next to vote for an agreed candidate of their own. If that happens, observers of PNG politics will see that incumbency can be a surprising disadvantage.

The second last para is now out of date, of course, in that Don Polye lost the election. Then, on 19 November the Pangu Pati leader Sam Basil crossed the floor with eleven other Pangu members, and gained a ministry. Patrick Pruaitch remains Opposition Leader, and  – not for the first time in PNG – a party has members in both government and opposition, because four Pangu MPs stayed in the Opposition.

Bill Standish is an Honorary Senior Lecturer in the ANU College of Asia and Pacific who has observed seven earlier national elections in Papua New Guinea.