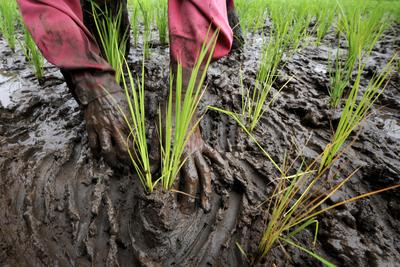 This is a guest post by Peter Warr of the Australian National University.

The recent volatility of international food prices has reinforced the mistrust felt within many food-importing countries towards international markets as suppliers of affordable food.

According to the World Food Summit of 1996,

Food security exists when all people, at all times, have physical and economic access to enough safe and nutritious food to meet their dietary needs and food preferences for an active and healthy lifestyle.

Indonesia is a net importer of all of its major staple food commodities, including rice, maize, cassava, soybeans and sugar, even though domestic production of each of these commodities is substantial. Prior to the Asian Financial Crisis of 1997 to 1999 rice import policy within Indonesia was to stabilise domestic rice prices at approximately the average international price. Until the early 2000s, Indonesia was the world’s largest rice importer. With the country’s transition to a more democratic form of government, the successful lobbying power of pro-farmer political groups led first to heavy tariffs on rice imports. Then, since 2004, rice imports have officially been banned, although limited quantities of imports have periodically been allowed. As a result of this policy, the price of rice within Indonesia has increased relative to other prices by about 40 per cent.

The argument advanced here is not that Indonesia’s self-sufficiency policy is a bad idea, but that protection policy (the import ban) as an instrument of achieving it results in unnecessary social costs and places food self-sufficiency into conflict with the goals of food security and poverty reduction. The distributional effects of protection policy as a means of reducing imports are the basis of the argument.

Obviously, people who are net consumers of rice are harmed by an increase in the price. But which consumers are harmed the most? Unfortunately, the answer is: the households for which rice is the highest proportion of their budgets – the poorest consumers. This includes not only the urban poor but also most of the rural poor, a surprising majority of whom are net buyers of rice. For example, this includes all landless agricultural labourers – people who sell their labour and buy rice.

What about the effect on producers? Obviously, anyone who is a net seller of rice benefits. Who benefits the most? The answer is obvious: those who sell the most – the largest farmers. Small farmers are both consumers and producers of food. Their net sales of rice might be positive or negative or, if they are subsistence farmers, zero. But if their net sales are positive they are small. Price changes have very little net impact on this group of farmers, one way or the other.

Some of the largest beneficiaries are not farmers at all. First, there are absentee landowners. Agricultural product prices become capitalised into the price of agricultural land. Raising the price of rice benefits anyone who owns rice land, or land that could be used to produce rice and these landowners are not necessarily farmers. Second, there are the rice millers. The import restriction operates on milled rice and the immediate impact is on the price of that product, rather than the price of paddy. Rice millers benefit directly from the increase in the price of their product. Paddy prices may increase as a result of the increased price of milled rice, but not necessarily in the same proportion. Third, those importers who receive the limited entitlement to import rice receive a windfall profit – the difference between the import price and the higher domestic price multiplied by the quantity of rice they are allowed to import.

Policies for pursuing rice self-sufficiency by raising the domestic price of rice are, in effect, policies for transferring massive amounts of money from the pockets of the poorest Indonesian consumers of rice to other, much richer Indonesians: large farmers, absentee landowners, rice millers and quota recipients. The policy achieves ‘self-sufficiency’, but only at the expense of reducing the food security of the most vulnerable people – the poorest net consumers.

A preferable strategy for raising self-sufficiency is to focus more effectively on improving agricultural productivity. This reduces imports by raising agricultural output but does so without raising the domestic price of food and so without creating a conflict between the goals of higher levels of self-sufficiency on the one hand and food security and poverty reduction on the other.

Peter Warr is Head of the Arndt-Corden Department of Economics and John Crawford Professor of Agricultural Economics in the College of Asia and the Pacific at the Australian National University.

This post appear first here on the East Asia Forum.

Peter Warr is Head of the Arndt-Corden Department of Economics and John Crawford Professor of Agricultural Economics in the College of Asia and the Pacific at the Australian National University.