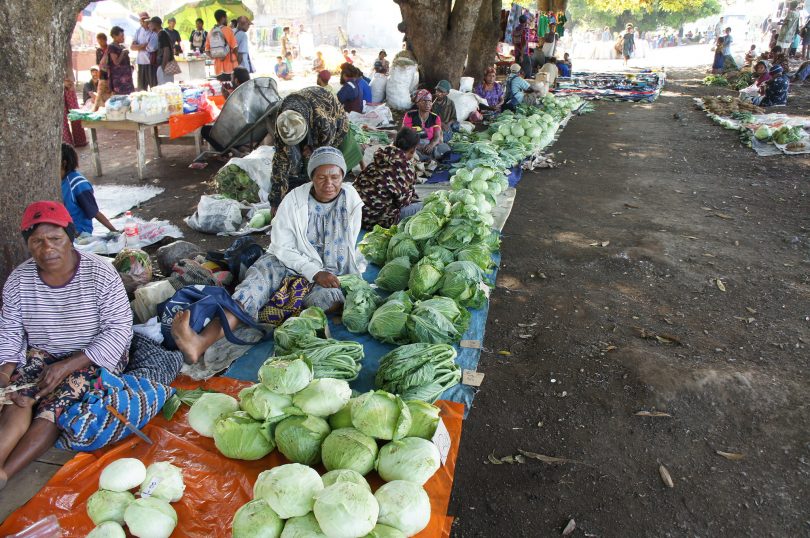 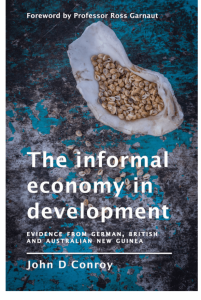 In the lead-up to independence in Papua New Guinea in 1975, a lively debate took place over what should be the appropriate strategy for the country’s economic development. On the one hand, the Australian administration in PNG, in accord with a 1965 report by the World Bank (prepared at the invitation of the Australian government), advocated a strategy of ‘accelerated development’, concentrated on existing areas of established growth and relying on ‘trickle down’ to bring beneﬁts to relatively under-developed areas. As against this, a number of ‘progressive’ commentators pressed for policies to raise the well-being of the Papua New Guinean (as opposed to the expatriate) population, especially those in less developed areas, and to promote indigenous participation in business. Following self-government in 1973, the latter view gained the political advantage.

In 1972 a team led by economist Michael Faber from the University of East Anglia, with anthropologist Keith Hart, was invited to PNG to advise on development strategies. Hart had recently come from a study of the informal economy in urban Ghana and, identifying a lack of informal economic activities in PNG as a development constraint, one of the Faber Report’s key recommendations was to prioritise measures to encourage the growth of an urban informal sector – thus making PNG, in Conroy’s words, “one of the ﬁrst ex-colonies anywhere in which the ‘informal sector’ became an issue of public policy”.

Despite the subsequent inclusion in the PNG constitution of its ‘Eight Aims’ and ‘National Goals and Directive Principles’, which emphasised self-sufficiency, reduced inequalities, and localisation of economic control, with “development to take place primarily through the use of Papua New Guinea forms of social and political organisation”, Conroy’s conclusion is that: “The Faber-inspired attempt to encourage economic informality failed”. That is the starting point for his study.

In the early chapters of the monograph, Conroy looks at the nature of pre-colonial societies in Melanesia and the impact of colonialism in Dutch New Guinea, German New Guinea, and British and Australian (Papua) New Guinea, drawing on an extensive, interdisciplinary literature. He emphasises the limited nature of market processes in pre-contact Melanesia, while noting “instances of economic hybridity” resulting from confrontation between market economy and traditional exchange during the colonial period, particularly in West Papua.

The greater part of the study, however, focuses on the differing experiences of transition from subsistence economy to market exchange in the colonial centres of Port Moresby, Rabaul and Goroka – Port Moresby “located in an economically unpromising zone” and with its indigenous population subject to a “preservation morality”, and Rabaul and Goroka “enjoying favourable resource endowments and other advantages”, including in the case of Rabaul an entrepreneurial Chinese population dating from the period of German administration.

In Rabaul, in the inter-war period, Conroy suggests, officials in New Guinea sought to promote white settler interests by containing emerging Tolai and Chinese informal activity “within a thicket of regulations”, while in Papua their counterparts “felt the need to regulate indigenous economic activity into existence”. “Informality becomes salient,” Conroy notes, “only with the adoption of market exchange, with the emergence of bureaucracy to regulate it and with the efforts of economic actors to accommodate themselves to the emerging modalities of markets.”

The Second World War saw a temporary suspension of colonial policies and an administrative merging of the two territories of Papua and New Guinea. The post-war years also brought a new ideology of ‘economic development’ and directed greater attention to the welfare of indigenous peoples; in Australia this took place initially under a labour government which adopted a ‘dual development’ policy in which the “welfare of natives [was] of paramount importance” and labour market reform was seen as essential.

The period between the end of the war and independence also saw substantial immigration to Port Moresby and the growth of informal settlements. Conroy goes on to analyse post-war developments from a ‘social democratic’ perspective, while at the same time noting alternative theories and ideologies that contributed to the contemporary debate.

While in Port Moresby villages turned increasingly to wage employment and subsistence production declined, in Rabaul subsistence agriculture was maintained and some Tolai (described by Scott MacWilliam as “Tolai bourgeois and would-be bourgeois”) turned to smallholder cash cropping and other business activities. In Chapter 18 Conroy gives an account of the revival of the cocoa industry on the Gazelle Peninsula and the rise and fall of the Tolai Cocoa Project in the 1950s and 1960s, favouring explanation of its demise in terms of rural informality over a contending class narrative: “Although it is often assumed informality will be eradicated by modernisation, in practice it appears informal economic activity is tenacious, pushing back against pressures for change.”

At the same time, Conroy refers to “evidence of growing formalisation in much Chinese business” in this period and out-migration by Rabaul Chinese to other centres in the country. In the case of Goroka, Conroy describes the mixed motives of Australian administrators and white planters in promoting the rhetoric of partnership between planters and local landowners in the development of the coffee industry around Goroka, and the co-opting of an emerging elite of Gorokan entrepreneurs to support planter interests. Marxists were quick to identify this elite group (who were the subject of study by anthropologist Ben Finney) as an emerging class of indigenous rural capitalists, a view challenged by several anthropologists and other scholars, especially in view of the group’s “intergenerational failure in transmitting wealth”.

Conroy concludes that, “by the end of the colonial period, Gorokan modes of engagement had become diverse, with varying degrees of formality and informality, as between smallholders and… ‘big-man entrepreneurs’.” He suggests that informal smallholders, cushioned by subsistence, “did not internalise the market rationality required by the ‘development’ orthodoxy”, while big-man entrepreneurs (“rural capitalists”) earned much of their income outside agriculture while trying to balance the demands of communal prestige enhancement against the accumulation and reinvestment.

In a final section of the study, Conroy attempts to relate the narratives of Port Moresby, Rabaul and Goroka to what was happening at the national level. There is some discussion here of urban migration, the impact of minimum wages policy, lack of progress towards self-sufficiency, and the failure of moves to foster informality (“formalising the informal”). Returning to Port Moresby in 2009, however, Conroy saw more evidence of informality; PNG now has a policy for the informal economy, as well as a policy on small and medium enterprise, supported by the World Bank.

A national audit of the informal economy in 2018 assessed the value of informal production at K12 billion (around 20% of GDP), with mean net earnings per operator three times the legal minimum wage. But for Conroy “the informal economy in PNG is still too small”. He supports measures to provide an environment conducive to the growth of an informal economy, but concludes that efforts to create informality were mostly in vain; “Where informality arose it stemmed from forms of popular pushback against the forces of bureaucracy, vested interest and prejudice”.

The title of this monograph reflects its primary focus. But perhaps it does little to indicate the depth and breadth of its contents. What Conroy has provided is not just an economic history, viewed largely through the lens of ‘informality’, but (as Ross Garnaut acknowledges in a foreword) a history of thought in PNG in the 1960s and 1970s, which those of us present at the time, like Conroy, might revisit with a sense of nostalgia. Most latter day economists, it seems, seldom venture far beyond Port Moresby or delve into the rich anthropological, social, and political literature on PNG. For them especially, this monograph should be recommended reading.

This review first appeared in the journal Asian-Pacific Economic Literature.