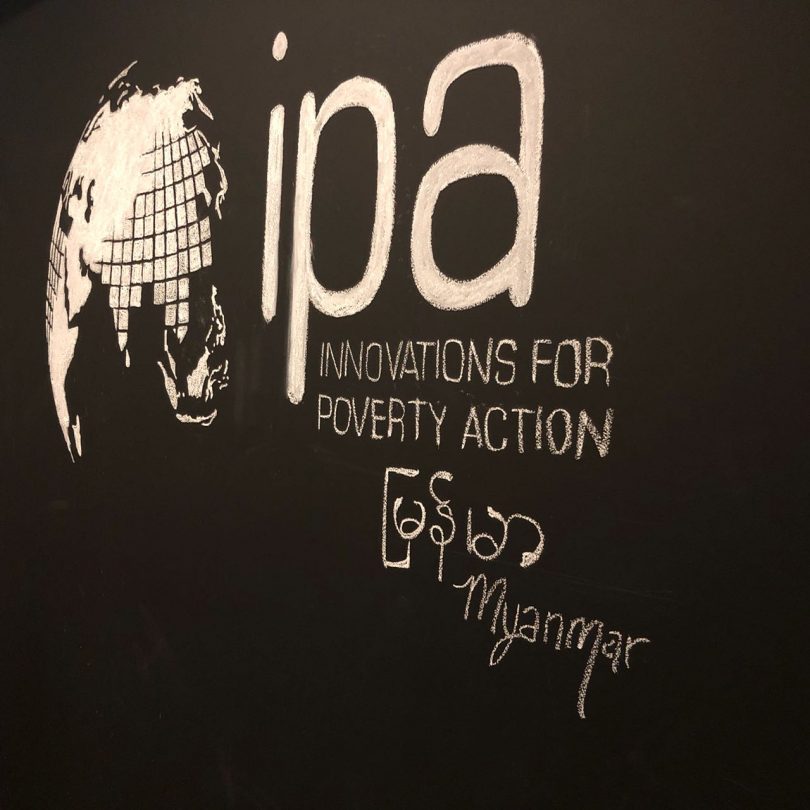 Recently, I had the privilege of interviewing Ricardo Morel, the Myanmar Country Director for Innovations for Poverty Action (IPA), who was in Canberra for the Myanmar Update at ANU. This is an edited excerpt of the interview.

In recent decades, hundreds of billions of dollars have been spent on programs designed to reduce global poverty, but clear evidence on the effectiveness of these programs is rare, and when evidence does exist, decision-makers often do not know about it.

IPA is a non-profit research and policy organisation that aims to tackle both these problems. With the vision of having more evidence for less poverty, IPA brings together academic researchers with decision-makers at governments, international and national NGOs, and bilateral and multilateral organisations to discover and promote effective solutions to global poverty problems.

To achieve this, IPA designs and implements impact evaluations to measure the effectiveness of programs and policies aimed at helping poor and vulnerable populations. We specialise in randomised controlled trials (RCTs) because this rigorous methodology allows the isolation of the effects of a program from other factors. IPA evaluations do not simply tell decision-makers what works and what does not, but rather seek to uncover causal mechanisms that will lead to creating or adjusting better, more effective programs and policies.

How long has IPA worked in Myanmar and what are some of the achievements?

IPA started operations in Myanmar in 2015 and has already accumulated significant experience in designing and implementing research studies in all states and regions of the country. We currently have completed seven studies and have ten active projects on social protection, financial inclusion, community participation, agricultural value chains, gender empowerment, public health, SME development, and peacebuilding that involve partnerships with international NGOs, local CSOs, and the government.

The two key projects we are currently wrapping up are a large-scale randomised evaluation to assess the effects of an unconditional cash transfer program in maternal and child health. This is in line with the Myanmar National Social Protection Strategic Plan, and will inform the efforts of the Ministry of Social Welfare, Relief, and Resettlement, as well as international stakeholders promoting and implementing social protection programs in the country.

We are also analysing the results of a representative baseline surveys of people’s knowledge of, attitudes toward, and expectations of the peace process to determine where important gaps exist in people’s awareness and understanding of the process. This work will inform the donor community as well as peacebuilding non-governmental and civil society organisations to design strategies to meet these needs.

Based upon IPA’s experience in Myanmar, what have you learnt about conducting impact evaluations in fragile and conflict-affected states?

Conducting any research in a fragile and conflict-affected setting is bound to be difficult. For impact evaluations, we strive to collect representative data through randomised sampling, but in conflict-affected states, this can lead to the selection of sites which may present challenges in terms of security, authorisation to conduct research, and sensitivity in asking about topics related to politics and the conflict itself. As such, we must plan first and foremost to keep our staff safe and the respondents’ privacy ensured, while thinking creatively about ways to ensure that the voices of populations in conflict-affected areas are not absent from the research just because the areas where they live are more difficult to visit. In a study about the national peace process, for instance, ethnic communities which have historically been marginalised and still suffer from ongoing conflict are precisely the voices that any research should attempt to capture. To do this carefully, we rely on our local staff’s knowledge of developments on the ground, and our partners’ extensive networks of local civil society organisations who may be able to facilitate our research presence.

Are there any opportunities for IPA to be engaged in other fragile and conflict-affected countries in Australia’s region? If so what are they?

Yes. This is one of the regions in the world with less rigorous evidence on causal impacts and the effectiveness of development programs, and IPA would welcome partnering with researchers and organisations working in this region to generate valuable and actionable evidence. For instance, we are currently in preliminary discussions with the World Bank to collaborate on a study in Papua New Guinea to evaluate the second phase of the government’s Urban Youth Employment Project in Papua New Guinea. We hope this engagement be a first step for IPA in contributing to an evidence-based agenda in the Pacific.

IPA currently has funding available for proposals that seek to conduct rigorous quantitative evaluation in conflict and fragile effect states.