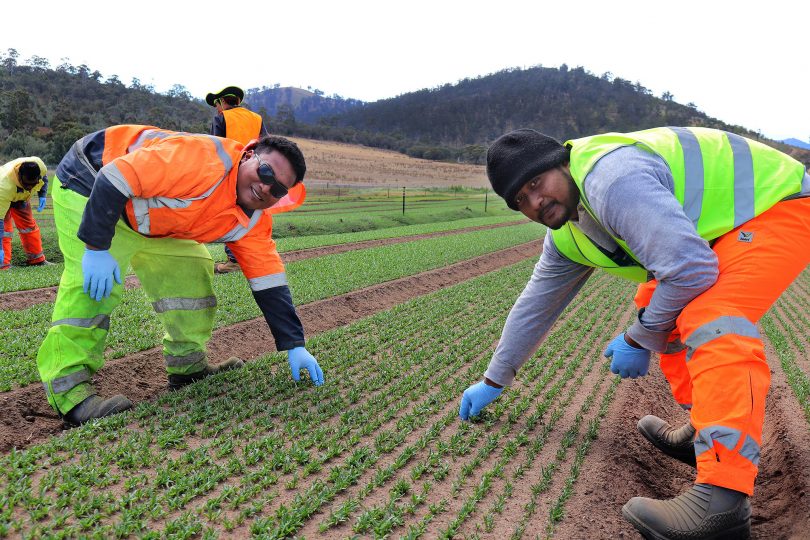 Workers in the Pacific Labour Mobility Program (DFAT/Flickr/CC BY 2.0)

We’ve previously written about calls by the National Farmers’ Federation (NFF) for the introduction of an agricultural visa to meet labour shortages in Australian agriculture.

The proposal has gained traction more recently. Agriculture Minister David Littleproud has said the Nationals will continue to push the Coalition for the adoption of such a scheme, describing it as “non-negotiable”. NFF President Fiona Simson recently mentioned the proposal in a speech to the National Press Club.

However, calls for a new visa category have either dismissed or ignored existing schemes that bring Pacific islanders and Timorese to Australia to work in regional areas.

The newly-created Pacific Labour Scheme, which aims to bring semi-skilled workers to regional areas where there are employment shortages for a period of up to three years, does not even rate a mention by the NFF, despite clearly meeting the demands of the NFF for a longer-term agricultural visa.

The Seasonal Worker Programme (SWP) is dismissed by the NFF on the grounds that it is “primarily a foreign aid program”, and due to its “lack of focus on the industry’s requirements” (both strange accusations, given the size of the SWP is driven by employer demand, and given the scheme does not involve foreign aid).

Presumably, the fact that the SWP currently brings about 8,500 workers, and that the new Pacific Labour Scheme is currently capped at 2,000 workers, is part of the problem. The NFF estimates that there is a labour shortage of approximately 100,000 workers.

Anecdotally, we’re aware of policymakers and industry stakeholders who do not believe the Pacific can provide an adequate supply of workers. In advocating for an agricultural visa, they have their sights on the far more populous Asian countries (other than Timor-Leste).

Is this a fair assessment? Could the Pacific and Timor-Leste, through the SWP and an expanded Pacific Labour Scheme, meet the labour shortage faced by Australian agricultural producers?

We’ve calculated the potential pool of SWP workers from the Pacific and Timor-Leste in the table below. We’ve ignored the Pacific Labour Scheme for now, given it is only just commencing. However, if its trajectory is anything like the SWP, we can expect it to become an important source of labour for regional areas. This is provided the government scales it up from its current pilot of only 2,000 workers (something that the government could do easily, and which occurred after several years in the case of the SWP).

In our analysis for the SWP, we exclude the smallest Pacific island countries, and consider only those eligible countries with a population of 100,000 or above. The projected populations are for the year 2020. We also exclude the “US Compact” states as they already have free access to the US labour market.

The maximum penetration of overseas seasonal work into the 20 to 45 age group has so far been in Tonga, where 13% of the population in that age group go every year to either Australia or New Zealand to pick fruit and vegetables. All Pacific island countries have high levels of unemployment and underemployment. Not everyone will be able to or want to travel. Some will be constrained by health or family considerations. A conservative assumption of the potential seasonal work pool in the Pacific is given by what Tonga has already achieved – 13%. Most observers note that there are many more Tongans who would still like to work offshore. Indeed, World Bank research indicates that there are still entire villages in Tonga not participating in seasonal work.

A more realistic pool would therefore be, say, 20% of the population aged 20 to 45. Finally, nearly all participants in seasonal work are men. Under an ambitious program, this could be changed, and women could start participating more. This would lift participation to, say, 30%.

From these total seasonal work pools, one needs to deduct the number of workers who would go to New Zealand. The cap in New Zealand is 10,000. We could assume conservatively it will be increased to 15,000. 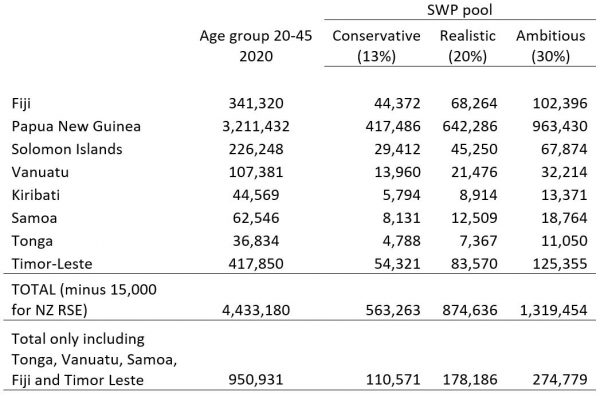 This assumes that all countries can contribute to the extent possible. But some countries are more organised than others. The more successful countries, of the larger ones covered in this analysis, are Tonga, Vanuatu, Fiji, Samoa and Timor-Leste. Including only these countries, the pool reduces to 111,000 on the conservative assumption, 178,000 on the realistic assumption, and 275,000 on the ambitious assumption.

These calculations, simple as they are, demonstrate that there is no shortage of workers from the Pacific who could contribute to agricultural production and other regional activities for which there are insufficient Australian workers. Claims that the Pacific is unable to meet Australia’s regional low-skilled labour demands are untrue.

What then is the problem?

The NFF has made it clear that the SWP is too bureaucratic and inflexible. In its 2017 submission, it argued: “While each of these visa programs help to fill the gaps in agriculture’s workforce shortages, they do this in a patchwork manner. More importantly, each has significant problems and draw backs, at least in part because they are not principally intended or designed to address the real problem: the labour needs of agriculture.”

The government is aware of these problems and has made changes to the SWP. More may well be required. The industry also needs to engage with existing schemes. The NFF, for its part, would benefit from having a fulltime staff member working to both promote the SWP and PLS to its members, and negotiate the changes needed to make it better suit the needs of employers.

Taking a greater lead role in promoting existing schemes to members, while also working to ensure these meet the needs of members, should be the priority for the NFF and others concerned about labour shortages in regional areas. There is no need to advocate for yet another agricultural visa.

An error in the table relating to numbers from Kiribati was corrected on 24 September, and a consequent change to totals on 9 October.