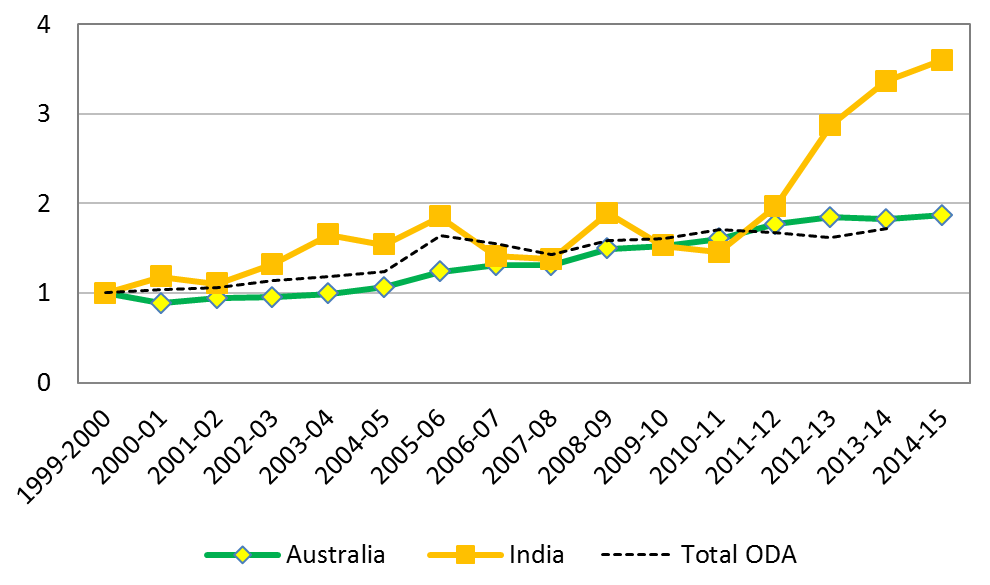 We all know that non-OECD aid is growing fast, but here’s a finding that surprised us: depending on how you measure it, Indian aid is now bigger than Australian.

India doesn’t regard itself bound by OECD conventions when it comes to measuring aid, but nevertheless sets out quite clearly (in Volume 1, Part II of its expenditure budget) its “grants and loans to foreign governments,” mainly from the Ministry of External Affairs, but with contributions from the Ministry of Finance and Ministry of Shipping as well. About two-thirds of the aid is grants, one-third cheap loans. It is all provided to other developing countries, or to multilateral institutions. It might not meet all Official Development Assistance (ODA) criteria but it is our best estimate of Indian development cooperation or “aid”.

We can compare these numbers with those that Australia declares as ODA. Though we know it is a loaded term, we refer to both numbers as aid, simply as a convenient shorthand. No perfect like-for-like comparison is available, and we provide some more details on comparability at the end of this post, but this comparison is about as good, or meaningful, as it gets between an OECD and non-OECD donor.

Figure 1 shows aid, thus defined, from India and Australia since the turn of the millennium, in both cases setting the value in that country’s own currency in 1999-00 to one, and adjusting for inflation. The dashed line shows an index of OECD aid, also in constant prices. The increase in Australian aid has matched that in OECD aid very closely. When accounting for inflation, Australian aid increased by 73% between 1999-00 and 2013-14; for the OECD as a whole the increase was 72%. Indian aid, by contrast, will have increased by 260% by 2014-15.

Not only has Indian aid increased more rapidly than Australian and global aid, but the timing of the increase shows a different pattern, with an upwards trajectory being re-established in India’s aid program from 2010-11, just as Australia’s and the OECD’s scale-up ends.

India’s aid has grown so fast because the Indian economy, and therefore Indian government expenditure, has grown rapidly. But India is also prioritizing aid, as Figure 2 shows. The share of aid in total Indian central government expenditure has risen from 0.3% to close to 0.5% between 1999-00 and 2014-15. In Australia, this ratio has always been higher, but has increased only marginally over this period: from 1.1% to 1.2%. 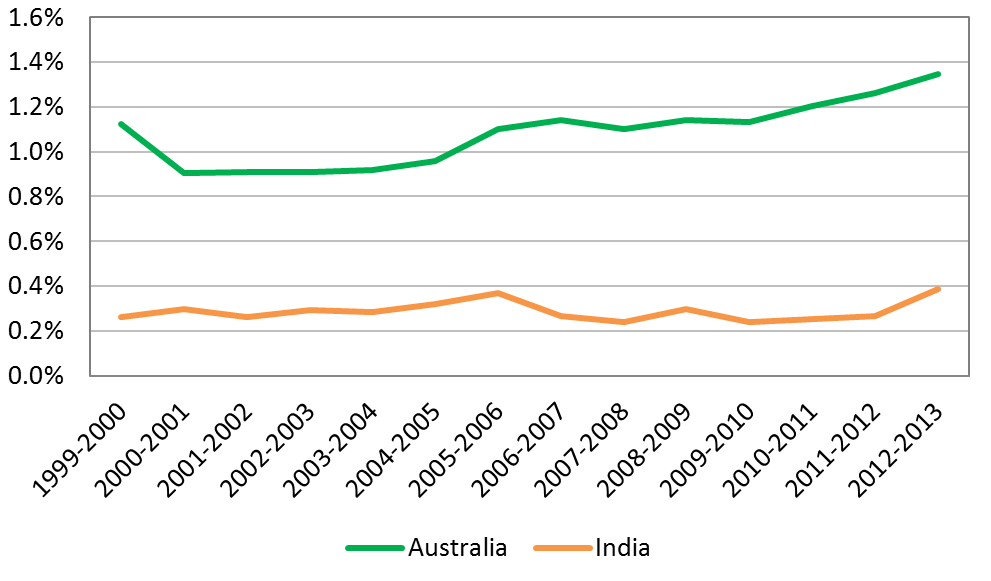 Notes and sources: Budget documents as per Figure 1. 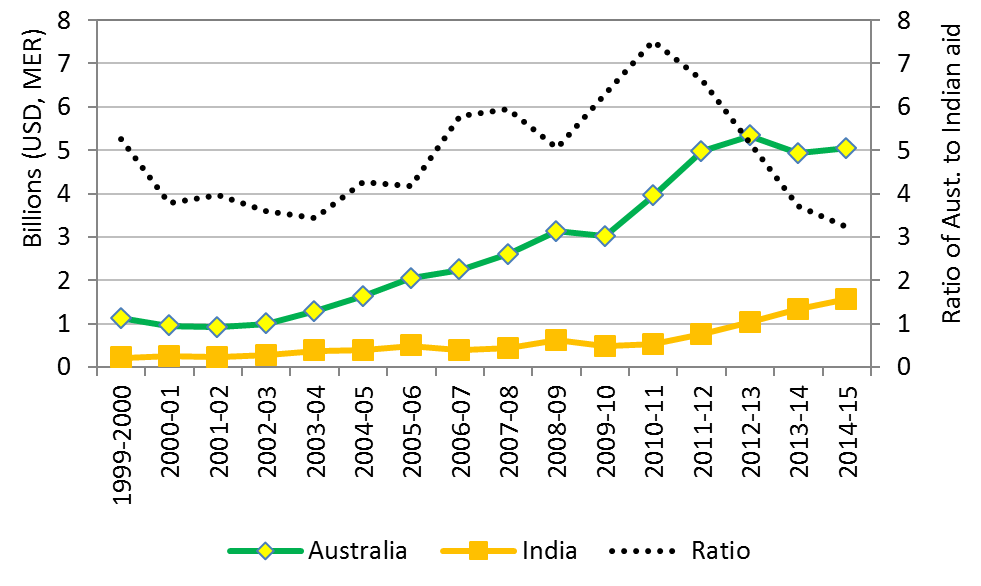 Notes and sources: As per Figure 1, with exchange rates from OzForex

This comparison favours Australia because the Australian dollar appreciated against the US dollar by some 50% over this period; by contrast the Indian Rupee depreciated by some 30%. But, as Rani Mullen has pointed out, a comparison based on market exchange rates can be misleading because the purchasing power of one US dollar is greater in India than it is in Australia. Most aid from India is expensed on Indian goods and services, and, despite progress in untying, the same is probably true of Australian aid. And even if Australian aid is not expensed in Australian goods and services, it is expensed at Australian prices. Think how many more scholarships or advisers you could finance with one million US dollars in India than in Australia. Figure 4 shows the volume of aid from both countries in US dollars, but using purchasing power parities rather than market exchange rates. By this comparison, over the period covered, the Indian aid program has gone from being half the size of the Australian aid program to slightly larger than it in 2013-14, and being almost 20% larger than it in 2014-15. 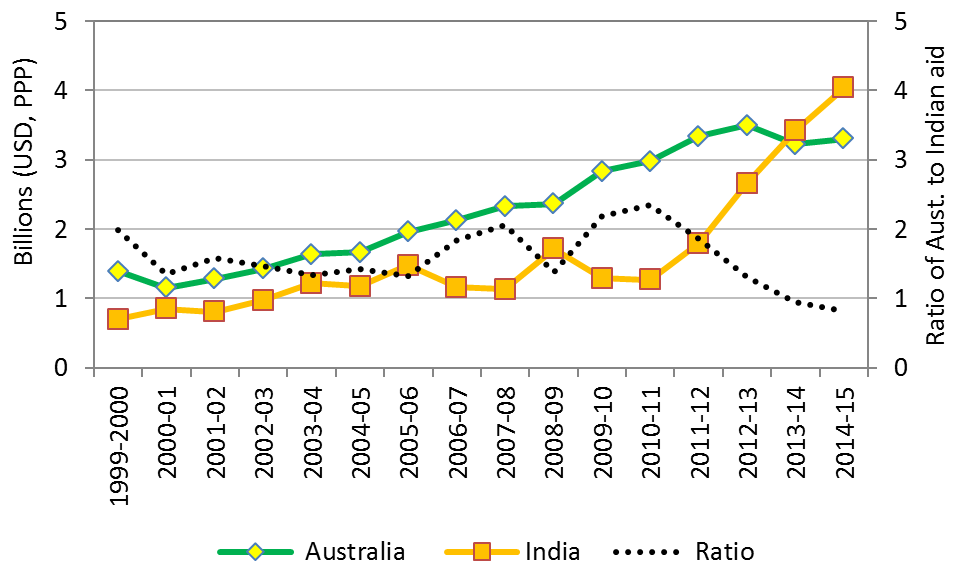 Notes and sources: As per Figure 3 with PPP conversion factors from World Databank. These were unavailable for 2013-14 and 2014-15, for which years they were fixed at their 2012-13 rate. Rani Mullen has some similar calculations for India here.

This is quite a remarkable finding. Australia sits outside the first tier of ODA donors (the largest five by a considerable margin are the US, Japan, the UK, France and Germany), but is one of the second-tier OECD donors (along with Sweden, Norway, the Netherlands and Canada). Australia is, in other words, a major bilateral official development financier, and so, it would appear, is India.

It is true that a lot of India’s aid (almost two-thirds) goes to Bhutan and that a significant portion of this is to build dams to produce hydropower to sell to India. This benefits both countries, but would it be counted as ODA? We are also excluding loan repayments, which would further reduce Indian aid. But, on the other hand, we haven’t included India’s rapidly growing concessional lines of credit, which are scheduled to hit $US 1.7 billion this year. These are off-budget (though with an on-budget interest subsidy reported, but again not included in this analysis) and are primarily for the purpose of export promotion, but undoubtedly with development benefits.

One interesting insight from this analysis is how higher prices have hurt Australia’s aid effort. One US dollar buys only half as much in Australia as it did in 2000. When calculated in current US dollars, our aid program has increased by 330% since 1999-00 if market exchange rates are used, but only by 130% if purchasing power parities are used. Such is the price paid for a resource boom. A US dollar also buys less in India than it used to, but the difference is much less.

What is the best way to compare aid values? Using market exchange rates or purchasing power parities? Or some weighted average of the two? There is no clear answer to these questions, but we are attracted to the idea of using purchasing power parities. It is certainly interesting that it makes such a difference. And that India’s aid now exceeds Australia’s when we value both aid budgets by a measure of their purchasing power is testament to how non-OECD aid more generally has grown, and how important it has already become.

Stephen Howes is Director of the Development Policy Centre. Jonathan Pryke is a Research Officer at the Centre.  This post is based on a paper comparing Indian and Australian aid presented by the authors at the recent Asia Foundation-RIS conference on Indian aid.