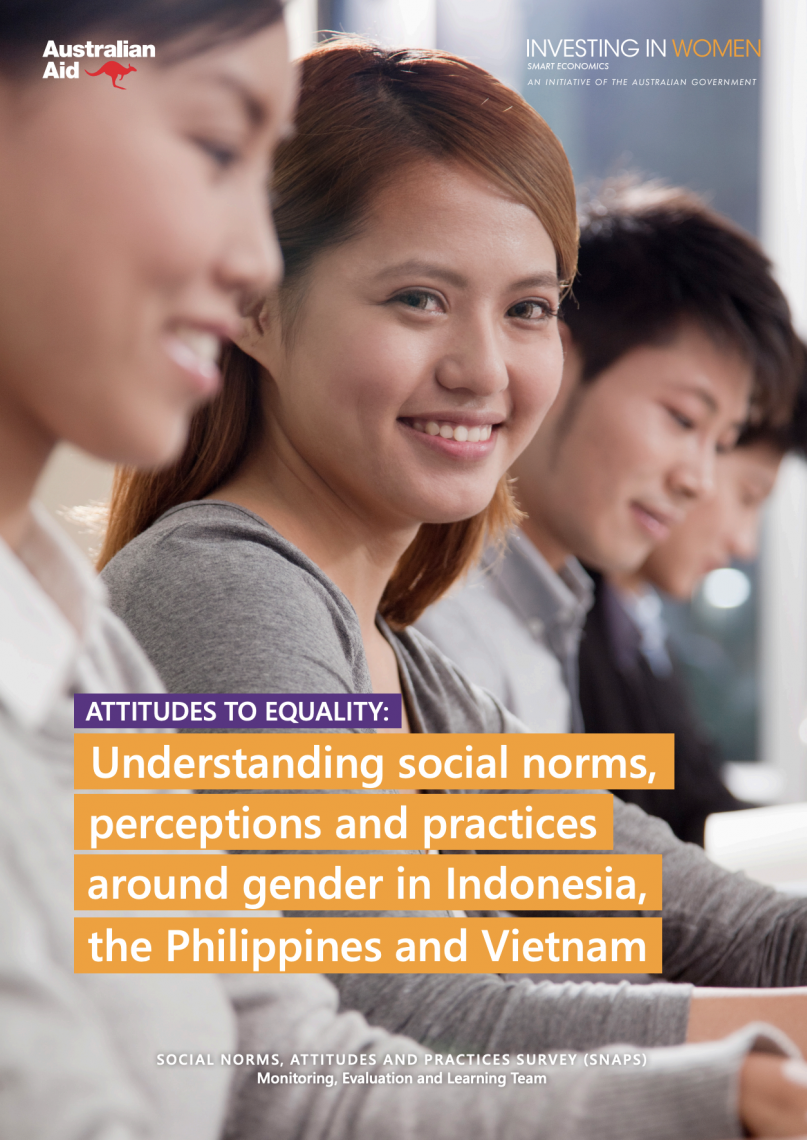 Reducing gender gaps and removing barriers to gender equality are good for economic and social development of countries, communities and families – the evidence is irrefutable: see, for example, here and here. Governments across the Southeast Asia region have made commitments to this effect, and donors have adopted different strategies and approaches to support them in their efforts. However, although gender norms are increasingly recognised as a major hurdle to achieving gender equality, donors have been hesitant to tackle this aspect concerned that it may be perceived as outside interference in culture. Given, however, the continuously evolving changes in gender norms, and the myriad of factors that contribute to this, there would seem little basis for donors to be queasy about helping to amplify the voices of those that are questioning norms and contributing to removing the constraints among those populations that are ready for change.

The speed at which countries close gender gaps varies and depends on many interrelated things. Some progress can be made in closing gaps simply by providing more services to make them more accessible to women and girls as well as to men and boys. For example, by building more schools and health centres, or providing more teachers and midwives, to close education or health gaps. Some can be removed by more direct policies, for example, encouraging girls education, or adopting quotas for women in politics. Sooner or later though, social and gender norms and attitudes come into play and start to impose different limits on the behaviours and expectations, and therefore the outcomes, for women and men. Gender norms become a major and persistent obstacle to closing gaps, and can seem intractable and untouchable.

Gender norms are, however, not as static or enduring as can often be implied. They are shaped by many things and evolve and change over time. The countries of Southeast Asia have moved through remarkably different historical trajectories over the last hundred years or so. The legacy of how this has influenced gender norms can still be seen today. As part of its communist past, women in Vietnam were encouraged to work along with men, and services such as free childcare at worksites were provided to facilitate this. Although the services were later lost in transition to market economy, women remained in the workforce, but also picked up most of the unpaid work in the home – arguably impacted by the even earlier patriarchal culture.

In post-independence Indonesia, early feminists actively and successfully lobbied for equal rights in the new constitution. However, their later association with the communist party had devastating consequences in the brutal massacre of communists that swept the country in 1965. Women activists were murdered, raped, imprisoned, and cast as sexually deviant in an organised campaign to discredit them. Feminist activism was set back by several decades and there was little dissent or protest when the New Order regime adopted a patriarchal and paternalistic ideology that cast women as wives and mothers – shaping the gender norms that persist to this day.

At a macro level the structure of economies and how they change can influence gender norms. Growth in the export-oriented manufacturing sector is associated with a shift away from agriculture and more non-farm opportunities for women including in the formal sector, and in countries where this has been a key source of economic growth, gender norms and attitudes have been changed. In Bangladesh, the expansion of the textile and garment sectors opened work opportunities for girls with junior secondary education. This influenced the decisions made by parents regarding their children’s education and a rapid improvement in girls’ education was seen. Strict norms on mobility of women and girls became significantly less restrictive when there was an economic incentive for them to travel. Importantly, formal/semi-formal paid work has been shown to have a positive impact on women’s economic empowerment – especially compared to unpaid work in farm or family enterprises, which has the least transformative effect on women’s lives.

While historical paths and economic growth might have been influenced by government policies, governments also make policies that directly influence and shift gender norms. Policies, attitudes (norms), and behaviours operate in positive feedback loops. Changes in any one of these can trigger changes in the other areas. The Social Norms, Attitudes, and Practices (SNAP) survey carried out in 2018 for Investing in Women, indicated that attitudes regarding optimum length of paternity leave tended to follow the prevailing policy on paternity leave in the country. The attitudes and behaviours did not drive the policy in this case, rather the policy has started to drive – or nudge – the norm (attitude), although this has not yet resulted in changes in behaviour.

Gender inequalities erode faster in urban areas than in rural areas. The SNAP survey confirmed that the attitudes of urban millennials in the three countries surveyed – Indonesia, the Philippines and Vietnam – had started to shift from the norms that were associated with the general population, for example, with regard to women working and men participating (albeit not equally) in housework and care of children. Migration, both international and domestic migration exposes men and women to new ideas, different experiences and practical changes such as living away from family support mechanisms, these too can cause changes in norms, attitudes and behaviours.

The key message then, is that gender norms can and do change, and many things from the macro to the household level influence these changes, either purposively or incidentally. Donors have, in fact, been contributing to shifting norms through development programs for decades. Donor supported family planning programs, for example, have contributed to shifting norms around family size. Even electricity projects that bring light and exposure to alternative ways of life through television programs, start to impact on long-held gender norms within communities. The SNAP survey indicates that many among urban millennials are questioning gender norms and are ready for change. Given the negative impact of restrictive gender norms on economic growth and inclusive development, it seems reasonable that donors should step up their efforts and support efforts to change norms. They can do so by finding ways to effectively amplify the voice of local champions and open the door for local actors to accelerate change, helping to create space for those men and women wanting to redefine their roles and options to meet the challenges of the current day.

To hear more on workplace gender equality in Southeast Asia, register for the panel event on Tuesday 18 February at the 2020 Australasian AID conference. The conference program and single session tickets available here.

Since leaving AusAID as Principal Adviser for Gender Equality in 2012, Gillian Brown has worked as an independent consultant working with DFAT, ADB and World Bank. Previously she was at the World Bank where she managed social development and gender programs in the East Asia Pacific Region.