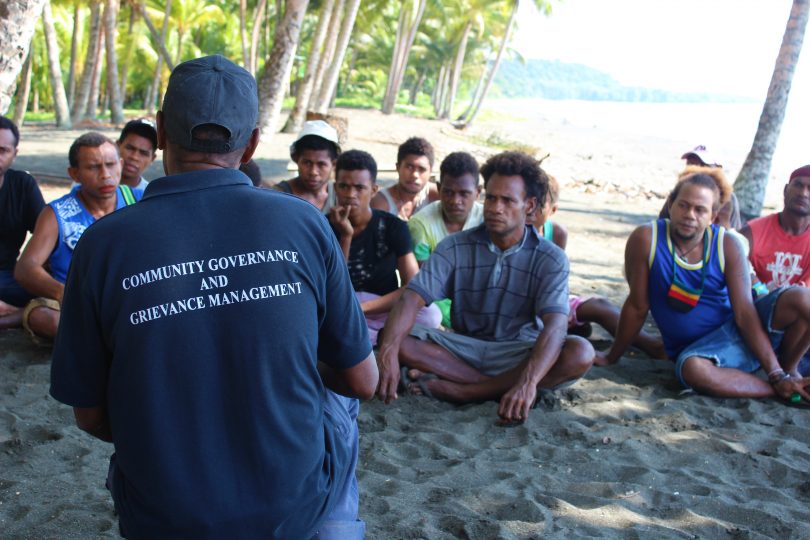 Jennifer Tai is standing on the northern shoreline of Bellona Island in the Solomon Islands’ far south, watching as the first supply ship in two months brings much-missed family members and delivers critical supplies, building materials and anything from the capital, Honiara, that the small island relies on.

Even by Solomon Islands’ standards, Bellona is particularly isolated. Considering it’s been a two month wait just for a supply ship, it’s easy to understand how difficult this isolation makes the delivery of basic government services, including law and order.

There are no police on the island; getting justice for a crime or dealing with disputes can often take years, or in some cases are never addressed.

This lack of conflict resolution has serious impacts: a land dispute can lead to work on a road, a school or a health clinic stalling, and it can do considerable damage to the close-knit communities who often can’t resolve these types of issues internally. Serious criminal cases such as robbery or gender-based violence may not be referred to the police, with many seeing the police – and more generally, the state – as largely disconnected from their lives.

If not managed carefully, these issues can lead to more instability and undermine the efforts that have gone into stabilising Solomons in the past 15 years. That is why Jennifer is there, watching the ship unload and helping lug food up the beach. Jennifer’s community voted for her to become a Community Officer as part of the Solomon Islands Government Community Governance and Grievance Management Program.

Supported by the World Bank and DFAT, since 2015 the program has been creating a ‘first line of contact’ between isolated communities and the government. And in a country that has experienced civil conflict and the near breakdown of state institutions in the past 20 years, it’s essential work.

Since the end of ‘the tensions’ (1998 – 2003), the Solomons has experienced numerous development gains, yet these successes can mask issues that are likely to heighten disputation and local conflict if left unaddressed.

However, two more profound and longer-term trends have intensified these challenges in recent decades:

What this program is attempting to do is to help people in rural communities access justice and help build community harmony, reducing risks of conflict escalation. Community Officers like Jennifer work with local authorities (such as chiefs and the Church) to strengthen their ability to resolve disputes, or to resolve disputes themselves, while building links between communities and the state (both national and provincial, including the police). In this sense, the project is helping to extend the reach of the state in rural areas.

Many formal justice projects would provide further finance to the court system – for instance to get magistrates to travel around the provinces frequently enough for disputes to be resolved through the courts. This project, on the other hand, recognises that a lot of disputes stem from breakdowns in social order at the local level, and these issues can be resolved without recourse to police and courts.

This is the role that a Community Officer like Jennifer can play: bridging the gap between the formal and informal justice systems. On Bellona, Jenifer is someone who works with local authorities, but has the ‘shadow of the state’ behind her, through links with the police and provincial and national governments.

Rolling out and adapting

The Community Governance project was based on extensive public consultations that showed the problems stemming from weaknesses in local-level grievance management and the clear sense among rural Solomon Islanders of the measures that they felt could help them address these problems.

The program has been running in the provinces of Rennell, Bellona and Makira-Ulawa since 2015, has just expanded to Malaita, and will soon expand to Central. The roll out to other provinces will see the program adjust to different circumstances with larger populations that are in some cases closer to the formal justice system. But the core of the program will remain the same: addressing community justice and grievances where they matter the most – at the community level.

Watch other documentaries in this series from Bellona and Makira about the project here or read the full policy note here.

Virginia Horscroft is a Senior Governance Specialist for the World Bank’s programs in the Pacific Islands and Papua New Guinea, specialising in public sector reform.