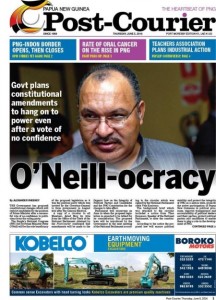 Last week was one of political upheaval in Papua New Guinea with confusion and news about the possibility of PNG Prime Minister Peter O’Neill being arrested, and his response in abolishing Taskforce Sweep, suspending senior police officials and reshuffling his cabinet.

Before adding my own perspective on these matters, I want to recognise another event from last week, a tragedy that passed unremarked. On Friday 20 June, another young man on Manus Island died as a result of the unruly behaviour of the PNG mobile police force sent to boost security for the Australian Asylum Seeker Regional Processing Centre. As residents of Manus Island organised to protest against the mobile squad, a poet posted a tribute on Facebook – a mother’s lament. A young high school student who had set off to attend school like every other day never returned home. He was hit by a police vehicle driven by members of the PNG mobile squad who were drunk. His friend was also hit, but survived.

What has been coined PNG’s ‘Game of Thrones’ stems from legal and procedural technicalities over the legitimacy of payments made to prominent PNG lawyer, Paul Paraka. Whilst exhibiting a seemingly iron grip, it appears that what is happening is an implosion of O’Neill’s current power base and with it a reorganisation of his inner circle is taking place.

In my view there are two critical points about O’Neill’s power since he became prime minister. Whilst, like others, I have commented on his ‘regional processing centre’ deal with the Australian government as a way of holding any critique by Australia of his government at bay, I also think that it is important only in so far as it boosts O’Neill’s public image in the region. I think that O’Neill is less worried about international criticism of his role in corruption than he is about threats to his leadership that are far closer to home.

The first of the two issues of pressing importance for O’Neill is keeping his brothers from the gas-rich, Hela province happy. Indeed in the longer term, political power in PNG will be based on political compromises between the resource-rich provinces and the rest of the country. Until such time as other provinces develop extractive industry resources equal to Hela province, politics in PNG will be greatly influenced by the Hela leadership. 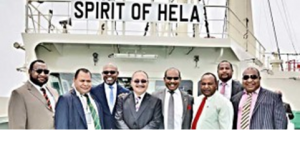 If a picture speaks a thousand words … When PNG’s first LNG shipment left its shores in May 2014, it might well have been Hela’s first LNG shipment. The Post Courier reported the story on 5 June, with the photo at right of the PM accompanied by all the Hela MPs (including the Minister for Finance, James Marape), as follows:

It was a historic moment for Hela. A moment to remember as the four Hela Members of Parliament stood united on board the very ship that is carrying the LNG gas – ‘Spirit of Hela’.

Governor Agiru earlier this year said the LNG project will open new doors for Hela, “The benefits from the LNG will be immense. The high impact projects will change the future of Hela and its people. I need landowners to be united and speaking one voice … I want landowners to speak responsibly towards huge investments the government has put in their area because their benefits are immense.”

The story of how this gas was explored in the mountains of Hela is synonymous to the legends of the province. And yesterday the four took their stand; their proud moment to show the world that the very gas that was exported comes from their land.

Also during this period the PNG media ran numerous stories about various Hela groups (home-based clan leaders, customary landowners, urban and educated elite, university students). Make no mistake, this proliferation of activity is not just about scrambling within Hela province to position each interest group in relation to Hela wealth. Importantly, as the people of Hela affirm their place as the owners of PNG’s wealth, they are also making a bold statement to the world, and in particular to PNG, that it is Hela’s LNG project that will drive the economy, and it will be Hela power that will drive politics in PNG.

Hela’s leverage on PNG’s national political arena stems from the concentration of the LNG sites in its province. This means that Hela leaders are in a position to threaten closure of the LNG project operations, as indeed they have in the past. As the poorer brother from the Southern Highlands tribe, O’Neill knows that his leadership depends on the goodwill of his Hela brothers. To illustrate this, a report aired on the national TV station over the weekend relayed a message from Hela leaders that O’Neill’s leadership should not be challenged, at least until some development has taken place in the province.

While O’Neill and his Hela brothers celebrate the “Spirit of Hela”, the rest of the country is wondering how and if their Southern Highlands wantoks will share in the wealth and power.

The second issue of importance for O’Neill is his rift with the senior ranks of the PNG police, which cannot be taken lightly. Until now political leadership in PNG has been relatively safe from civic action, such as protests, because of legislation put in place to control (or one might equally conclude, suppress) public gatherings. Key to this success has been support from the troubled police force that, although weak in capacity and fraught with controversy, has willingly defended the government of the day. At the heart of this is a basic, if tenuous, control by politicians over the police force – or in other words, the state’s monopoly over the police force. This control over civic action was tested in 2012 and resulted in the downfall of the Somare National Alliance government. At that time there was no issue with the police force supporting the government – they were just going about their ‘normal’ duties.

O’Neill’s dismantling of the thus far effective anti-corruption agency,  Taskforce Sweep, and the removal and suspension of several senior police personnel is a high-risk but calculated move to retain control. It will be interesting to see how the police force respond and who replaces the outgoing police personnel. If the police decide to remain loyal to their outgoing colleagues then it is likely that O’Neill’s hold on power will crumble. Yesterday PNG media reported mixed police responses to public calls for the PM to step down. One report cited the police hierarchy as stating that there is unity in the police force, that the police will undertake its duties as normal and that there are to be no illegal protests. Another report on PNG National Broadcasting’s Facebook page reported that the police have given their approval for a public demonstration to go ahead today.

It will also be interesting to see how other political actors in PNG respond in the coming days and weeks. While international stakeholders (multinational corporations and bilateral partners) might be assured of O’Neill’s support for their various investments and interests, in PNG the determination and consolidation of O’Neill’s hold on power will come from a political compromise between the police rank-and-file and the Hela and Southern Highlands faction of politics.

Clearly the troubles on Manus Island (and there are troubles!) are as  low on O’Neill’s radar as they are among the national citizenry’s immediate concerns. Just today, amidst all the political turmoil, O’Neill was reported as hailing the Australian High Court’s decision that the Manus Island centre was legal: perhaps a gentle reminder to Tony Abbott and the Australian Coalition government of  just how much they need him.

O’Neill’s leadership style and manoeuvres in the past couple of years, and his current handling of domestic politics, are shaping and redefining both the national and the regional political landscape in deep and profound ways. But whether the PM himself is safe or whether he has now antagonised too many powerful players and the citizens of PNG is, for the first time since his 2012 election, now unclear.