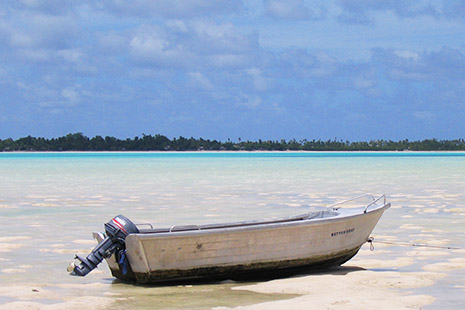 For small island states in the Pacific, the failure of the Durban climate negotiations has led to increased debate about climate displacement and migration. Many governments are reluctant to highlight the issue of long-term population displacement caused by climate change, feeling this will distract from immediate development challenges and undermine negotiating positions at the international level. But some smaller island communities are openly discussing migration and resettlement as a response to global warming, with the atoll nation of Kiribati leading the way.

The policy is driven by Kiribati President Anote Tong, who is seeking re-election this December for a third term as leader of the central Pacific nation. Although its delegation is in Durban lobbying for urgent action on greenhouse gas emissions and increased financing for adaptation, the Kiribati government is concerned that the atoll nation has little room to move.

“While we require adaptation measures, our adaptation options are extremely limited, given the nature of our islands,” says President Tong. “We are a country of low-lying coral atolls with most islands rising no more than two metres above sea level. Adaptation measures of moving inland and to higher ground are impractical for us. We cannot move inland due to the narrowness of our islands, nor are there higher grounds to which we could escape from the rising seas.”

In the lead-up to the Durban summit, Kiribati’s foreign affairs secretary, Tessie Eria Lambourne, joined other participants at a conference on climate displacement organised by the Gilbert and Tobin Centre of Public Law at the University of New South Wales. There, Lambourne expressed the frustration of many Pacific officials at the slow pace of global negotiations and the failure of large industrialised countries to focus on the needs of two vulnerable groups, small island developing states – to use UN terminology – and least-developed countries.

“Early on, our government kept shouting at the world to do something about climate change,” she tells me. “We know now that nobody heard that voice – our voice is very insignificant in the scheme of things. We pointed our finger at the emitters and challenged them to open their borders and take all our people in. We know that nobody heard that voice. Our president was very, very frustrated, so our government had a rethink. If this is not going anywhere, we need to have a re-look at our relocation strategy, and this is how the ‘Migration with Dignity’ policy came in.”

The policy is based on a calculated awareness that delays in finalising a new global climate treaty will lock in adverse environmental impacts over coming decades. The latest report on Kiribati from the Pacific Climate Change Science Program has projected increases in annual average air temperature and sea surface temperature. While sea-level rise is a long-term concern, the country faces more immediate challenges from changing rainfall patterns, ocean acidification and extreme weather events that adversely affect food security, water supply and coastal infrastructure.

This has particular dangers for a country that is made up of one high island and thirty-two low-lying atolls, spread across an area as wide as Australia. (With just 812 square kilometres of land, Kiribati has over 3.5 million square kilometres of maritime Exclusive Economic Zone.) Without urgent action on global greenhouse gas emissions, many of the country’s 103,000 people may need to move elsewhere in future decades.

With nearly half the population living on South Tarawa, one option is to move internally to larger atolls like Kiritimati. Church leaders look to larger Pacific neighbours like Fiji or Solomon Islands (which already host Gilbertese communities relocated from the British colony of the Gilbert and Ellice islands in the 1950s), though this poses complex issues of land rights. Others hope to move further afield to Pacific Rim countries like Australia and New Zealand, but require skills that would guarantee entry and face a loss of cultural and national identity.

Tong presents migration as a long-term strategy if rising temperatures increase environmental, social and economic damage in coming years. “The relocation of the 100,000 people of Kiribati cannot be done overnight,” he says. “It requires long-term forward planning and the sooner we act, the less stressful and the less painful it would be for all concerned. This is why my government has developed a long-term merit-based relocation strategy as an option for our people. As leaders, it is our duty to the people we serve to prepare them for the worst-case scenario.”

Tessie Lambourne agrees that migration policy should be part of the overall adaptation response to global warming: “We believe this is a rational approach to addressing climate change especially with the lack of response from the international community. We’ve done waiting, so now we’re doing something about it. We want our people to have all the options available to them. We need to plan and do this gradually.”

“The key element of our policy is the up-skilling of our nationals at all levels, though we are focussing on the vocational and technical levels at the moment,” Lambourne says. “We are improving our primary and secondary education system, starting from the basic foundations of education, but the focus of the policy is strengthening our local and national training institutions.”

As the world’s largest coal exporter, it’s ironic that Australia is providing key funding for these institutions. As well as supporting English language proficiency testing for 80 per cent of teachers, AusAID has funded increased teacher training through the Kiribati Institute of Technology, sixty full scholarships for the Australia Pacific Technical College and more university scholarships.

Labour mobility is already a key part of the islands’ economy. For Kiribati and neighbouring Tuvalu, remittances from seafarers who crew vessels for international shipping companies from North America and Europe are a crucial source of revenue. Seafarers’ remittances have provided about 15 per cent of Kiribati’s GDP in recent years, though the global financial crisis cut back employment opportunities as German shipping firms laid off staff.

Both governments have a strategy for training young Tuvaluan and i-Kiribati seafarers to work on overseas shipping lines, with sailors travelling overseas for eight months in the year. The two countries host training colleges: the Tuvalu Maritime Training Institute on Amatuki Island, Funafuti Atoll and the Maritime Training College on Betio, South Tarawa. These colleges provide a key vocational training opportunity for young people who drop out of schooling at Form 3. Most of those trained are young men, but since 2005 young i-Kiribati women have taken up positions as cooks and stewards on overseas ships. For Lambourne, the Maritime Training College is “a success story and a model that we want replicated in other areas.”

For young women, there are opportunities in nurse training and as aged care workers. In 2007, Australia funded the $6 million Kiribati–Australia Nurses Initiative, or KANI. After academic preparation in Tarawa, some eighty-one young i-Kiribati have travelled to Queensland for nursing training at diploma and degree level. “With the KANI initiative, young people are trained to be nurses, to Australian nursing standards and qualifications,” says Lambourne. “Under that pilot program, they can stay in Australia if they want to stay and work, but they’re not being forced to. If they choose to go back home, they’ll contribute to our health sector. It’s a win-win situation.”

For those without qualifications, Kiribati is looking to seasonal work programs, which provide temporary employment opportunities in fruit-picking and horticulture. Over the last four years, over 300 i-Kiribati workers have participated in New Zealand’s Recognised Seasonal Employer scheme, with another twenty-nine joining Australia’s Pacific Seasonal Worker Pilot Scheme.

Tong’s government is looking beyond traditional partners too, holding discussions with Canadian provinces on labour market gaps and sending people on scholarship to Taiwan. Kiribati has also joined other Pacific countries to send students to Cuba to study medicine and primary health care. As a fellow member of the Alliance of Small Island States and the UN Special Committee on Decolonisation, Cuba has expanded links to the largely Christian and conservative nations of the Pacific. Today, i-Kiribati students in Queensland and Cuba sing songs of praise in both English and Spanish.

Labour migration is a key policy of many Pacific governments, with the extra money from remittances helping households with school fees or improved housing. But the impact of labour migration extends far beyond the need to protect wages, conditions and workplace safety for the migrant worker. As well as economic opportunities there are social costs (especially those borne by the women and children who stay behind) that need to be addressed if temporary labour schemes become a greater part of the regional response to climate displacement.

Already, the lifestyle and work habits of Kiribati seafarers have mixed impacts on the social and economic circumstances of dependants and communities. With sailors away for eight months of the year, families often move to the capital to avail themselves of more time with their spouse or parent between voyages. Loss of employment by seafarers due to illness, injury or decline of job opportunities in times of global recession has serious effects on the economic circumstances of families. Children face complex adjustments in what are effectively single-parent households, with increased reliance on extended family. There is increased risk of HIV and AIDS for the workers, but also for wives and partners who find it difficult to refuse unprotected sex when their husbands return from overseas, and can face violence if they refuse.

With younger i-Kiribati more open to migration options, the debate over climate displacement and migration has generated initial uncertainty and even division in local communities. Older people – especially those with religious faith in God’s protection – are often more reluctant to consider relocation. In contrast, internet-savvy young people begin to consider their options when they hear of IPCC climate projections for 2050.

Lambourne’s parting words suggest that “migration with dignity” is still tinged with sadness: “What we know now is that when our people travel or migrate abroad, they always know there will be Kiribati to go back to. But in the face of this climate threat, our people can’t really accept the fact that maybe one day in the future, we may not have a Kiribati to return to. This is the emotional challenge for our people.”

Nic Maclellan works as a journalist and researcher in the Pacific islands.

This article first appeared on Inside Story.