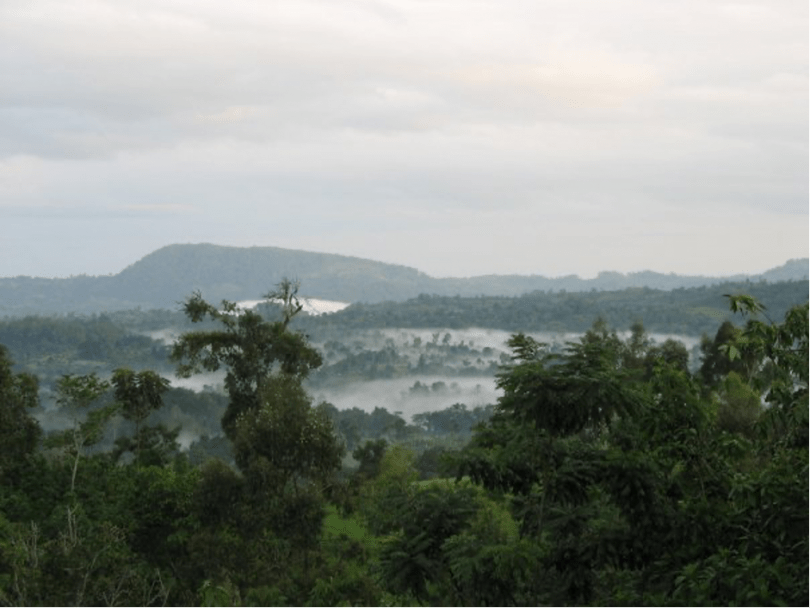 A midweek afternoon. 1967. First, a sini of coffee for my mother, then one for me. The tiny cup fitted perfectly in my hand. Our first coffee ceremony. After the first round, abol, for pleasure, more water was added to the jebena, the clay coffee pot, and it was boiled again. The second round, tona, was for thinking and contemplation, and then the third, baraka, for blessing or praise.

I had skipped, hopped and walked behind my mother for a couple of hours from the mission compound to the tiny thatched round tukul of one of her patients. My mother – a midwife who ran a mission clinic – had been called out in the middle of the night to deliver her patient’s shoulder-first baby a few weeks before. We’d meandered along the winding spirally path through the cool green rainforest, then along a smooth dirt path, packed hard by bare feet and donkeys and mules and oxen and sheep and goats, around rows of maize the same height as my mother, and fields of tef grass as high as my knees – I was a tall child for my not-quite seven years – and then finally to the tukul surrounded by a plantation of tall, thick, single-stemmed false banana enset trees 10 metres tall, and real banana trees with the sweetest small bananas in the world, walking-stick cabbage gomen, and sweet potato and onions and garlic and carrots.

And coffee trees transplanted from the nearby forest.

The wild coffee (Coffea arabica) rainforest in Kafa Zone, southwest Ethiopia, is renowned for its spices and honey, and for being the birthplace of coffee. Because Kafa’s topography is dominated by steep hills, gorges and streams, there are regional and local differences in the coffee-growing landscape. This means there is a broad range of diverse and unique flavour profiles.

Ethiopia holds the world’s main storehouse of genetic diversity for arabica coffee. Yet an estimated 43 per cent of the forest was lost between 1988 and 2008 due to resettlement and migration, timber extraction, forest grazing, and conversion to agricultural land. And climate change. At least 60 per cent of all wild coffee species are now threatened with extinction.

One response has been to find a way to reconcile the local people’s needs with conservation pressures through the formation of the Kafa Biosphere Reserve. An area of 760,000 hectares, it was admitted into the World Network of Biosphere Reserves in 2010. Since then a range of projects managed by the German NGO NABU include: reforesting areas with native tree species; training rangers for protection and management of the forest; innovative marketing of forest products; environmentally friendly agriculture; ecotourism; education and research; and, green diversification of Ethiopia’s garden coffee value chain. 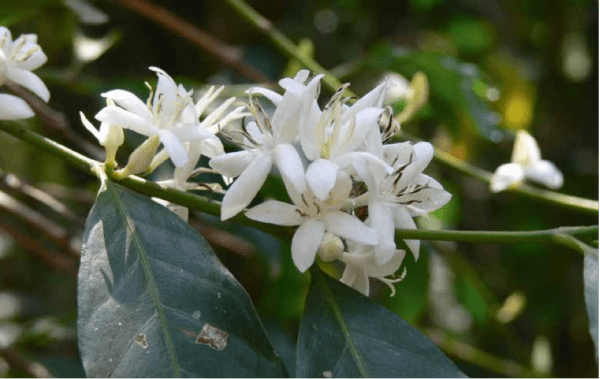 Our recent paper (co-authored with Abinet Shiferaw, Befikadu Taye and Zegeye Woldemariam), ‘Landscape multifunctionality in (and around) the Kafa Biosphere Reserve: a sociocultural and gender perspective’ explores the role of the local community in traditional resource management.

The first case study describes the long history of ecological wisdom and conservation narrated by the Shatto through music as a form of preserved culture and knowledge in sacred places, water points and forests. The Shatto identified as folk musicians who came to Ethiopia with Menelik I, son of King Solomon of Israel. Shattorasho – head of all Shattos and their deputies, Shattegudo – collectively mobilised as music professionals in the Kafa Kingdom palace, around nobilities, and within communities. On victorious occasions in the kingdom, Shattorasho, facilitated the songs and praised the king’s heroic deeds and the glory of the kingdom.

Shattos discouraged social and ecological crimes and encouraged environmental conservation by narrating forest history and spirits, knowledge and practices around sacred places and forests including water points through songs, oral expressions and poetry. People were strictly forbidden from entering into and cutting trees from dense forests (Share-Show) as these areas were directly under the jurisdiction of Kafa kings. As this knowledge is at risk of being lost, we suggest that the Shattos were like oral historians who had knowledge and information as socialisation agents of Kafa identity, culture and history using folk music. Exclusion or minimal disturbance in the Biosphere core areas to protect wild Coffea arabica could be reframed as similar to Share-Show.

In the second case study, we examine deejjoo, a thanksgiving sacrifice ceremony associated with natural forest resource management. The practice of qoollee deejjoo ritual sacrifice was performed deep in the Kafa forests, which are sacred places to the Kafecho people. The Kafecho people believed in Yeero, an almighty God, creator of the Universe and clan specific spirits called Eqqo, which is an intermediary spirit connecting people with Yeero through the mediator Allaamo. Most forest resources of Kafa are associated with these spiritual beliefs. Qoolloo deejjoo, the forest spirit dwelt in the forest, bushes, running water and mountains. Together these ritual practices maintained a close attachment between people and forest resources and biodiversity conservation and prevented deforestation. Other forms of traditional resource management were kobbo (large forest areas administered through customary rights); guudo (cultural forests used for worship, sacraments and prayers); and deddo (large trees where prayer or religious ceremonies are conducted).

Significant government policy changes and external forces resulting in large-scale deforestation and environmental degradation have reduced the number of participants of qoollee deejjoo over time.

We describe how Shatto elders – who were all male – passed on information about forest values, through music, oral expressions and poetry to their sons. Shatto women were primarily engaged in domestic activities. Occasionally they performed at public events when there were funeral ceremonies for public figures by accompanying the funeral with folk expressions and dances. There was home-based socialisation about Shatto identity for girls but they were never independent folk practitioners. In effect, there was no space for Shatto women as folk practitioners.

As with the male Shatto, women did not participate in deejjoo celebrations but provided food and drinks for thanksgiving ceremonies.

Both the traditional approaches described above, and the contemporary Biosphere management approach, have taken women’s roles and responsibilities as caregivers for granted, thus reinforcing gender stereotypes. The gendered division of labour and the exclusion of women from all of these management approaches have led to a male-centric notion of how the rainforest is (or was) maintained. This view has been partly reinforced by development projects that supply energy saving stoves, train women in regional crafts such as pottery, or other projects they can run from home like beekeeping or raffia weaving.

A focus on gender could accurately represent, recognise and support the reality of women’s lives in (and around) the Kafa Biosphere Reserve and could also contribute to natural resource management as well as sustainability and resilience for the Ethiopian coffee sector. 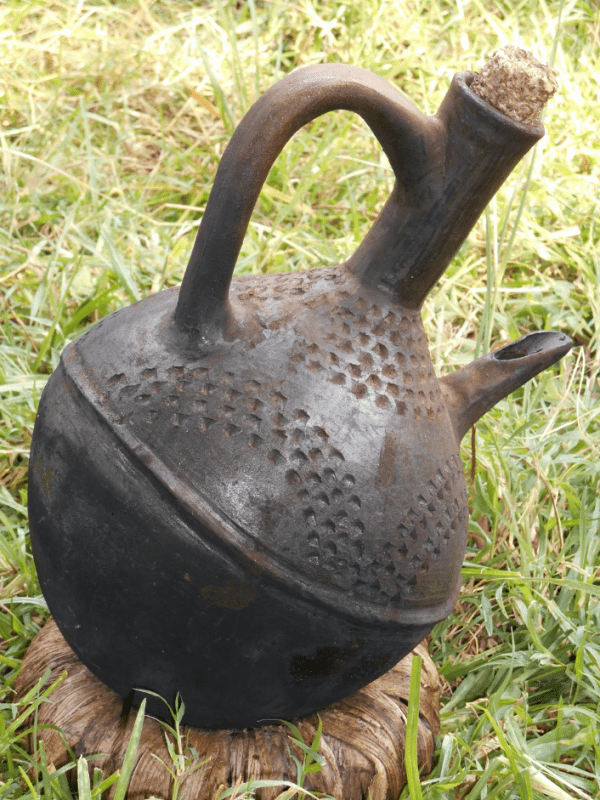 So when I think back to my first sini of coffee over 50 years ago, I remember that an invitation for coffee is symbolic of friendship, respect and hospitality. Performing the coffee ceremony is almost obligatory in the presence of a visitor, whatever the time of day. Making and drinking coffee is a daily routine – prepared by women – that develops relationships and constitutes a regular conversation platform. The paper in Landscape Research is probably my last academic paper. I want to remember how much I have gained doing research with women in Ethiopia and to mark the occasion with coffee.