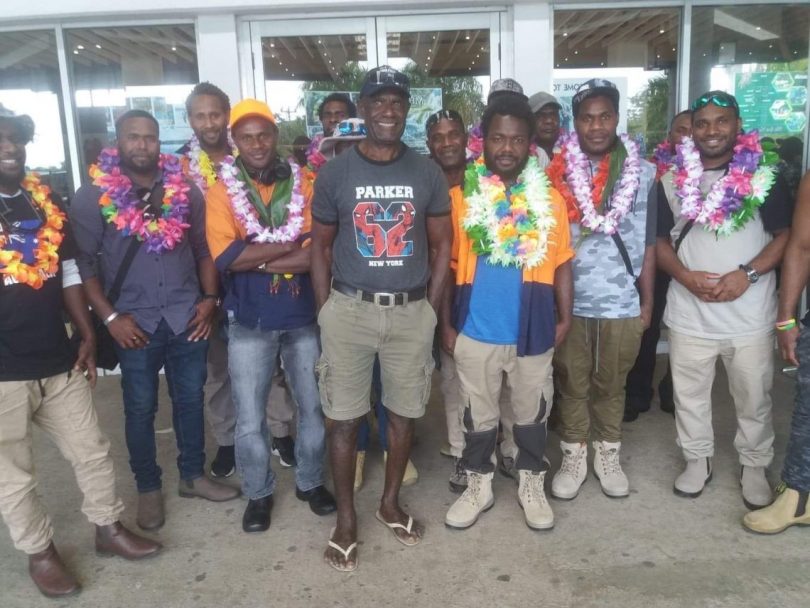 Workers return to Vanuatu following their time in Australia.

The Seasonal Worker Programme (SWP) has been extraordinarily successful for Vanuatu. Of the eight participating countries, Vanuatu sends the most workers. It is also the only country to license recruitment agents. This is a key part of the success of the SWP for Vanuatu.

But what exactly is the role of a licensed agent in Vanuatu?

In other countries, the relevant Department of Labour provides a ‘work ready’ pool of potential participants. Alternatively, employers recruit workers directly or rely on informal recruiters.

In Vanuatu, the recruitment role falls to the licensed agent. Licenses are issued by Vanuatu’s Department of Labour and Employment Services and are renewed annually.

The number of licensed agents has increased rapidly in recent years, at one point reaching one hundred, indicating how desirable a business opportunity it has become but also that the licensing system was not working well. Recently, however, there has been increased scrutiny and the number of licensed agents has gone down to about sixty. Only four or five of the licensed agents operate at a scale that makes it a worthwhile business, with appropriate financial returns that can cover the overhead costs of maintaining an office, support staff, and internet, and covering the costs of international phone calls and the time taken for the paperwork, including visa applications.

Most if not all licensed agents in Vanuatu are ni-Vanuatu. Some, but not all, are proficient in modern business practices. Many are past SWP workers themselves and have set up an agency in order to assist extended family members with the hope of a shared benefit in the long run.

Frequent domestic, and sometimes international, travel is required of agents who are tasked not only with finding workers but also getting them ready for their time in Australia. This includes the paperwork required for the SWP: obtaining a HAP ID (full medical), applying for a Temporary (International Relations) 403 visa, explaining the contract and letter of offer in local language, running the pre-departure meetings and training, explaining the travel itinerary, and taking them to the airport, even if it is a 5.30am departure. Once the workers are ensconced in their work in Australia the agent must keep in touch, sometimes every night on Messenger to boost morale and keep everything ‘on track’, and often being asked by the Approved Employer to sort out various issues, cultural and otherwise.

At $100-$150 per worker, agents are delivering an important service for a bargain price. That’s a bargain for a job that can, depending on the number of workers involved, take up to three or four days of full time work to get them ready and on a plane.

The Memorandum of Understanding signed by the Vanuatu and Australian governments clearly prohibits any licensed recruitment agent in Vanuatu charging workers or receiving money from workers in any way shape of form. The work of the recruitment agent is therefore underwritten entirely by the Approved Employer. Most agents invoice their Approved Employer well after the workers have arrived in Australia when the agent is looking to recoup some of his/her costs.

As noted in this blog, Australian Approved Employers are mainly large labour hire companies. They form relationships with, and rely on, a small number of agents.

Traditionally, there is no formal contract between Approved Employers and the licensed agents in Vanuatu. Supplier agreements are now required by the Vanuatu government, but are rarely used in practice. There are no rules of good practice, no code of conduct, and no mechanism for dispute resolution.

As in many areas of life and business, COVID-19 has been a stress test for both workers and agents. Agents have taken on the role of maintaining morale among their workers and keeping their behaviour in line. They have been asked to keep track of workers switching farms and, in some cases, leaving their Approved Employer. Non-payment to agents for workers who have been recruited but then not able to travel has been one of a number of problems agents have faced.

With COVID-19 the SWP has been paused, though it may be coming back to life with the Northern Territory pilot and following the recent announcement allowing arrangements for targeted recruitment if approval is granted by Australian state governments.

Now is the time to look at the ongoing success of the SWP and acknowledge the key role of Vanuatu’s licensed agents. If Vanuatu’s SWP success is to continue, it needs good governance to protect and regulate not only the workers, but also the agents.

Joanne Wade is a businesswoman in Vanuatu and currently serves on the Vanuatu Chamber of Commerce.