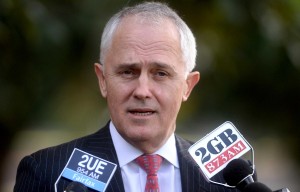 Sooner or later Malcolm Turnbull, Prime Minister, will need to think a little about overseas aid and the closely related topic of international climate change financing, if only in the context of preparations for his government’s first budget in May 2016—which will start shortly, if not immediately.

There are no indications that Turnbull has thought very deeply about aid before, though he has made some relevant remarks in parliament (collected here as Hansard fragments), mostly about ten years ago. He has delivered several thoughtful speeches about the place of Australia in the Asia-Pacific region, with a heavy emphasis on Australia’s relationship with China (Greg Sheridan, foreign editor of The Australian, panned them). He is well known for his interest in innovation, an existing priority in Australia’s aid policy, and open data, not so convincing a priority in Australia’s aid policy.

Turnbull has in the past had a penchant for big, flagship initiatives, most notably the $10 billion National Water Security Plan (January 2007) and the $200 million Global Initiative on Forests and Climate [pdf] (March 2007). The latter was mostly aid-funded, and I have written elsewhere (mainly in section 3) about Turnbull’s role in it. It is, by the way, questionable whether these initiatives were the product of sober ‘Cabinet government’ processes.

World Vision Australia Chief Executive Tim Costello has been quoted as expressing the hope that ‘Mr Turnbull’s philanthropic, humanitarian bent may prompt an increase in Australia’s foreign aid budget and permanent refugee intake’. Quite some time ago, in 2005, Turnbull said the following in parliament:

I believe we should continue to increase the resources devoted to overseas aid, both in dollars and as a percentage of gross national income, but, unlike the members opposite, I believe we should commend the government for focusing its aid program on promoting good governance and economic growth.

The first part of the above statement is now being quoted back at Turnbull by the Campaign for Australian Aid. However, more recently, in the course of a 2013 pre-election Triple J radio interview with Tom Tilley, Turnbull said the following:

TILLEY: Malcolm, how generous are we? I mean, even Britain who are in much worse financial situation than us have stuck to their commitments to spend 0.7 per cent of their budget on foreign aid.

TURNBULL: Well it is a question of how effectively they spend the money. There is a tendency to just judge your foreign aid – this is true with governments generally – to judge your commitment by the amount of money you spend and pay precious little attention to what you are actually getting for it.

Our focus has always on what you get for your foreign aid, how effective it is, and what the outcomes are. You can spray a lot of money around in any policy area – not just foreign aid – and pat yourself on the back for spending a lot of money. But without paying any attention to what impact and what effectiveness you’re actually achieving – and of course that’s why we’ve always been focused, certainly when we were in government, on spending money to promote better governance. Because the critical thing in most developing countries, one of the critical requirements is to improve the levels, the standard of governance because without that of course then you are not going to get the economic growth and that will in due course lift standards.

Perhaps that comment is discouraging, or perhaps little can be read into it. Costello’s hope might yet be realised over time, not least because Julie Bishop is likely to argue for stabilisation and perhaps some restoration of aid funding levels, and now has both a more receptive ear and an even stronger position in the party room.

It is also worth noting that earlier, in his 2009 ‘Power balance in Asia’ speech to the Lowy Institute (linked above), Turnbull said that, in order to position itself for ‘ongoing success in the Asia-Pacific and in particular in terms of our relations with China’, Australia needed to demonstrate:

… [a] consistency of purpose, a coherent set of principles, fidelity to the values of the Australian people and maximum transparency in the conduct of its relationships across the region.

So, even if an early increase in aid volume is not to be hoped for, perhaps there is some prospect of greater stability and transparency in the management of Australia’s aid budget.

If Turnbull has said little about aid, he has said a lot about climate change financing for developing countries—though not recently. In 2007 he was strongly and vocally of the view that the necessary level of global climate change mitigation could not be achieved without significant action on the part of major emerging economies, and without international emissions trading arrangements (including arrangements for the trading of forest carbon credits) that would help finance that action. As he said in a 2008 speech [pdf] to the Melbourne Institute:

Harnessing market forces is essential to achieving abatement at the lowest possible cost.

And as he told Reuters the previous year:

We recognise that developed countries will take a larger share of the [emission reduction] burden, as they have to date. But you simply cannot get to the big global cut in emissions if there isn’t a pathway for the developing world. …

Turnbull has indicated he will not scrap the Coalition’s Direct Action policy. However, it will be interesting to see whether he dusts off part of his earlier belief system—which was that most mitigation action taken overseas, whether financed by carbon markets or direct public investment, is a lot cheaper than most mitigation action taken domestically, while also delivering development benefits. As Turnbull said in the Reuters interview linked above:

The incentives, the revenues from the carbon trading and investment in CO2 abatement, have to get all the way down to the grassroots.

Finally, a personal note. I was asked to brief Turnbull on development and deforestation in Indonesia when, as environment minister, he visited Jakarta at very short notice in early April 2007. He was neither affable nor brusque; just extremely focused and businesslike. He quickly extracted what knowledge I had to offer, much of it acquired in the hours before I met him, and assimilated it completely. He established an easy rapport with Indonesia’s then forestry minister (whose subsequent career was less illustrious than Turnbull’s), thanks in part to his own prior experience as an investor in a logging concern in Solomon Islands. He was careful to emphasise that Australia’s Global Initiative on Forests and Climate, in which Indonesia was expected to play a central role, was both a climate change mitigation and an economic development initiative. It was an assured performance, underpinned by a detailed technical knowledge.