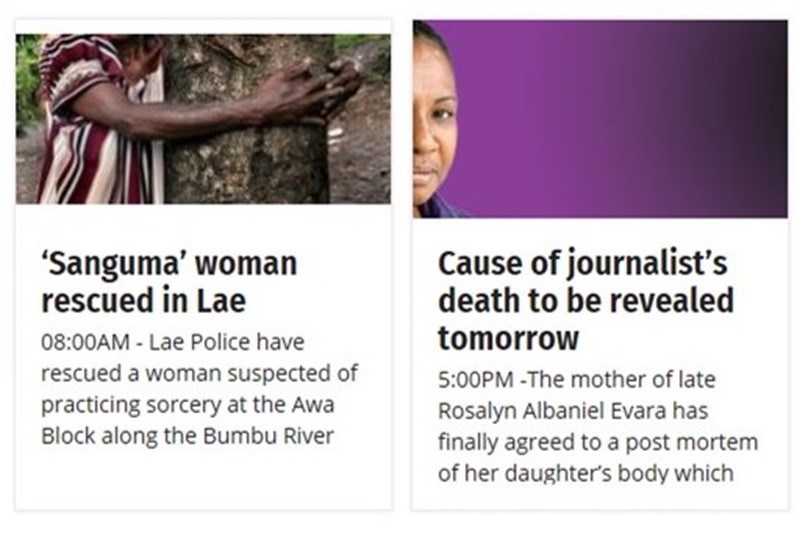 Another week of violence against women in PNG

It was a shocking week, even in what seems to be the ‘norm’ of gendered violence in PNG. Norms are so entrenched that without thinking many people become silenced, largely because of the despair that it so difficult to change anything. On October 14, a prominent journalist, the late Rosalyn Albaniel Evara, passed away in Port Moresby. At her funeral last week allegations emerged that she had been subjected to domestic violence. Simultaneously unfolding was another harrowing incident of sorcery related violence in a settlement in PNG’s other major urban centre, Lae in Morobe Province. One woman narrowly escaped death when the police intervened while another woman was found dead the following morning in what police believe might be a related incident. All three incidents, along with other stories depicting the kinds of stress that the police in PNG face, can be seen in the first 15 minutes of this report.

Why is this week any different? This week marks a pivotal moment in media coverage of gender violence in Papua New Guinea. It is a point when the stark realities facing PNG journalists were foregrounded, leading many in the industry to reflect critically on the ethics of the media in reporting gender based violence. But importantly, the fact this happened at the same moment that the sorcery related violence in Lae occurred also opens up other questions about the role of the media and the powers we can unintentionally or intentionally exercise in our individual and collective silences.

Silence of the educated, empowered woman

During her funeral, the late Rosalyn’s bereaved aunt broke the silence, publically alleging that Rosalyn had been the victim of domestic violence and expressing remorse that she had not done more to help. In doing so, with images of the deceased’s bruised body, she cast a powerful spotlight onto the journalist’s life; from being a journalist who told ‘others’’ stories to the ‘other’ whose important story needed to be known.

This triggered a series of debates and outrage, including calls for an investigation; reflecting on their own ethics in journalism; and interventions by numerous people including colleagues and friends. One news article reported that the national minister for Religion, Youth, and Community Development called for a proper investigation into her death, and that the Governor of Port Moresby had intervened to ask for a post mortem to be undertaken. In another report the media council of PNG also called for an investigation.

People soul-searched. Why did they not do more to help? What was the duty of care in reporting her story by her colleagues in the media?

Regardless of what the post mortem results are and the outcome of the ensuing investigation, the late Rosalyn Albaniel Evara’s story exemplifies the sad irony for many educated, employed, empowered Papua New Guinean women – women who are often expected to be strong and presumed to be in a position to leave. The fact is many suffer long periods of violence and abuse. It is difficult to speak out when everyone around you – your family, your colleagues, your friends – relies on you for strength and for support. Women fear being labelled weak, ‘not coping’ or being stigmatised for being a burden to others. We feel that it is better to keep suffering in silence and being loved for being a strong person, than to threaten the fabric in which we are a thread that keeps the social net together.

This week, news also began emerging on Facebook of a sorcery related violence incident, and police responded, saving the life of a woman. In the process, police urged people to refrain from posting on social media and instead contact the police, but the following day another woman was found dead at the same location. Yet, as Lae based reporter Scott Waide notes in this report, social media has come to play a strong role in giving voice to the marginalised and to bringing such cases to the attention of the police, authorities and general public. The media also needs adequate resources to report difficult cases, including cases that occur in remote places. But for Scott Waide, these incidents may never have made it into mainstream media.

Overall, the response from national leaders and influential actors to recent sorcery cases has been subdued. No public calls for investigations. No public outcry for inquiry and action. In 2013, a woman accused of sorcery was burnt in Mt Hagen, prompting a national and international outcry and the haus krai movement. But this time, perhaps it was over shadowed by the media’s focus on their colleague.

Support for the media

The contrasting responses to these events point to the challenges of sustaining media coverage on these issues, and to the need to give voice to all women who face the threat or often the reality of violence. They also highlight the vulnerability of journalists working in this space – as victims of violence as well as from ongoing exposure and pressure to report on these issues to the public. In recognition of the importance of gender based violence, the government of PNG and its development partners have formulated the National Strategy to Prevent and Respond to Gender Based Violence and the Sorcery National Action Plan (See here, here, and here). In view of the challenges faced by journalist consideration must be given to allocating some funding to the media industry to support timely, accurate and independent reporting on these issues in ways that also support journalists.

Part 2 of this post discusses government policies and budgets for addressing gender and sorcery based violence.