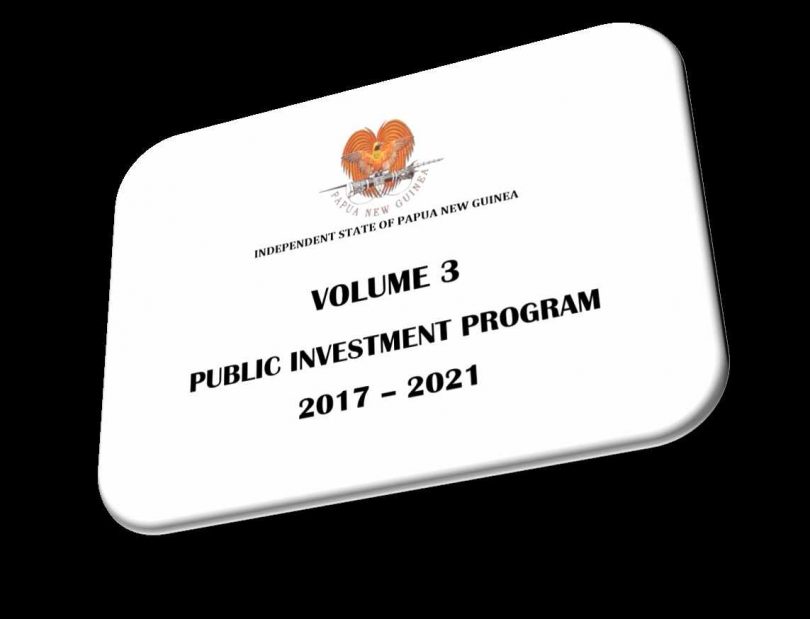 A key constraint in addressing gendered and sorcery related violence is when people and communities are silent about violence. Breaking the silence on violence is not easy, and in my previous post I discussed how these challenges range from the personal to the public space in which the media is an important institution in our collective fight.

Another important institution where silence needs to be unpacked and broken is the public arena of government policies and budgets. As mentioned in my previous post, in relation to the incidents that unfolded last week, a number of PNG’s Members of Parliament made public statements. PNG’s Prime Minister Peter O’Neill made a public statement in which he reportedly called on PNG men to take responsibility for violence against women. Whilst this is an important message, it is not enough. Thousands of Papua New Guinean men grapple daily with violence in their homes and communities with minimal support from the government (for example here). Significant time and energy is spent in their communities mediating conflict so that their communities are safer than they would otherwise be.

That said, the PM also reportedly stated that the government was committed to greater resources for prevention and justice interventions. Rhetorically, these public commitments are meant to reflect the importance that the PNG Government is placing on these issues. Indeed, in 2016 and 2017, two important policy documents were approved: the Sorcery National Action Plan (SNAP) (see here, here, and here) and the National Strategy to Prevent and Respond to Gender Based Violence.

Putting money where the words are

Without funding and focussing on implementation and evaluating progress, these policies are just words. The national budget signals to the public the Government’s priorities and direction. The Public Investment Programme (PIP) is where ongoing and new development programmes are allocated funding. A rough analytical exercise reveals that much more can be done. I conducted a search of the 2016 and 2017 PIP of the words ‘violence’ and ‘sorcery’ to see what funding has been allocated to these issues. The results are in table 1. Funding for activities that have an explicit mention of violence is spread over a number of programmes. The good news is that the funding has increased in 2017.

However, the PIP figures are not clear about the source of funds. As this report by the government of Australia alludes, the government of PNG relies heavily on donor funds for implementation of programmes addressing gender and sorcery related violence. The report notes:

Although the Papua New Guinea Government has established several Family Support Centres in hospitals (combined with donor  funds), and Family and Sexual Violence Units in 17 police stations (mostly established through Australian funding), the Government [of Papua New Guinea] does not fund any community support services for survivors anywhere in the country, nor any prevention programs to reduce violence.

The bad news is that the term sorcery only appears once in the 2016 PIP and relates to a legislation review and amendment project of which sorcery related legislation is only one. In 2017 there is no mention of the term ‘sorcery’ in the PIP budget and no funding allocated towards the SNAP.

Obviously further analysis would need to be undertaken to unpack how individual departments (e.g. the Department of Police) and projects allocate their funding, and the breakup of these budgets by source of funds. This rudimentary exercise suggests that the government of PNG needs to allocate more resources to the implementation of its policies. 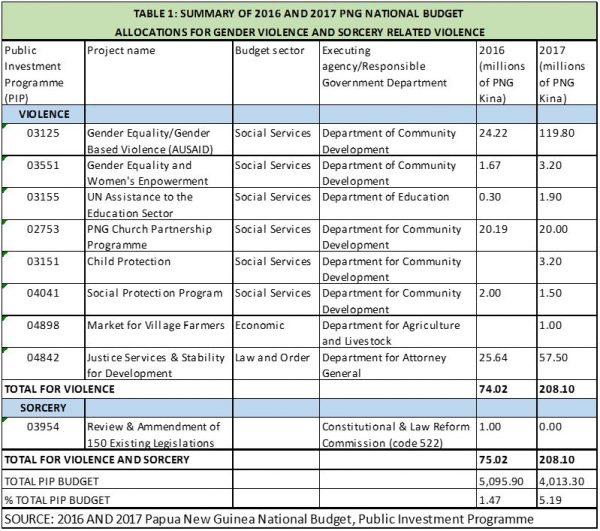 Papua New Guinean communities cannot be expected to deal with these issues alone. In the 2018 Papua New Guinea national budget, more funds need to be allocated towards the programmes addressing gender based violence, and a dedicated allocation for sorcery related violence should be made. As the media responses these past couple of weeks have shown, the media also have an important role to play in these efforts, and they too need support. An important challenge will be to report on the outcomes of these budget allocations and monitor and evaluate progress over the period of the policies. Peter O’Neill is right in saying that the men of PNG need to step up. But he and his fellow parliamentarians are the starting point. They have the greatest power to allocate resources and provide direction. A budget that is silent on gender based violence, domestic violence, and sorcery related violence will not achieve broader economic development.

Part 1 of this post discussed the media challenges in addressing gender and sorcery related violence.