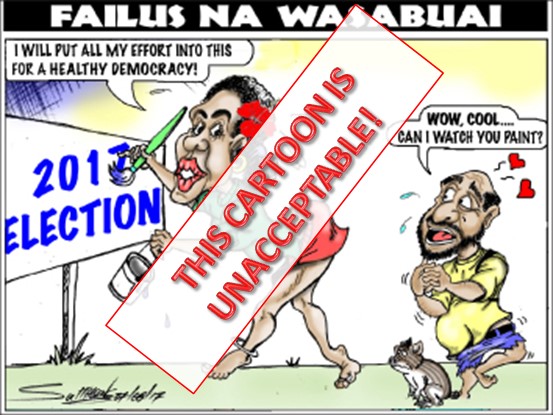 Recently, the Post-Courier, one of Papua New Guinea’s oldest and largest daily newspapers, ran a cartoon featuring a Papua New Guinean female candidate in the 2017 national general elections. She is dressed in a short skirt while discussing her election aspirations for a healthy democracy. Behind her a Papua New Guinean man is sweating; somewhat delirious, with red love hearts floating above his head, he is more interested in watching her paint – and watching her backside. The underlying message is clear: try as they might to contribute to a healthy democracy, women contesting the PNG 2017 national elections are merely the objects of men’s desire.

The 167 women contesting the national elections comprise only 5% of the total 3,340 candidates. Their will and courage to take this step is remarkable, and every single one of these women, regardless of the election outcomes, is a leader and role model for all women in the country. The Post-Courier cartoon is grossly sexist and only serves to reinforce social, cultural and political challenges women face. It also undermines the good work that the media generally have done in terms of coverage of the elections and women’s issues.

Unfortunately, other than public outcry that may stem from PNG’s active social media, the Post-Courier is unlikely to be held to account for such a tasteless and harmful cartoon. By contrast, in other countries media outlets are met with great debate for similar images (for example see here and here). While PNG’s media faces struggles to maintain media freedoms, it also enjoys considerable freedom from public scrutiny. This is largely because of a relatively low adult literacy rate of 64.2% and a social and political climate that tends to curb public debate. Even though a vibrant social media is changing this, the mainstream media still wields a powerful influence on the PNG audience. In this context, this cartoon speaks volumes.

This situation needs to be addressed and the PNG mainstream media should lead efforts to strengthen equitable and fair coverage of women in PNG face with respect to their political participation. In this regard, an excellent body of emerging research identifies the constraints that women in the Pacific face in political representation as well as potential areas for support. The evidence shows that women in the Pacific face immense challenges in political representation (see also here). Two case studies in PNG (here and here) confirm the importance of money politics and entrenched cultural perceptions about the place of women in society.

The good news is that within these detailed and comprehensive studies lies solid evidence that the media can help to improve the performance of women candidates and their performance in public life. This report notes that the media has an important role to play in shaping public discourse, while this interview notes that those who work in the media can do more to learn about gender and other issues to give fair voice to all sectors of society. The findings of this report, suggest that collective action and strong robust coalitions are more likely to succeed at achieving transformational change and changing gender norms. As this submission to a parliamentary inquiry discusses, access to advertising space on TV, newspapers and radio can potentially play an important role in supporting women’s political representation. This report notes that access to powerful networks can be important for mobilising support. Another report identifies how women politicians are subjected to greater scrutiny of their private lives. Other studies point to the importance of a sustained support for women candidates that is linked to the electoral cycle, and the need for wider national awareness campaigns that focus on women’s rights to contest elections and hold public office. On all these issues, the media has a clear role to play in catalysing action and responses, and in sustaining a national conversation about important issues such as gender equality.

The other good news is that some relatively easy steps can be taken to draw on this rich literature to strengthen the role of the media in supporting a national effort to improve women’s political participation. PNG’s development partners, including the Australian aid program, are also well placed to supplement these efforts given that many of them are supporting both women’s political participation and the media. These steps include, but are not limited to, the following:

Positioning media as an actor in a coalition: As the peak body and voice of the media industry, the Media Council of PNG is a good starting point. Its website states that it was formed in 1994 to address moves by the then government to control media, to raise awareness about the importance of free press, provide training and support a complaints tribunal. This mandate gives the Media Council a broad platform to foster practices that move beyond reporting the news towards engaging as a coalition partner in the cause for greater women’s political representation.

Informing media of current research: The sexist Post-Courier cartoon indicates that more needs to be done to translate and share the referenced research findings with the media. Synthesising some of this research for a media audience and providing training on it may be one way to inform the media of the important and powerful role they can and should play.

Establishing a media watchdog: In May 2017 the PNG Media Council launched a code of conduct with partners including an array of international development partners such as the Australian Department of Foreign Affairs and Trade, the United Nations, the European Union Delegation, the Australian Press Council, the Pacific Islands News Association, and others. The code includes a comprehensive list and applies to all media. Several of the guidelines within the code are of direct relevance to the cartoon referenced in this post. To strengthen the code of conduct, the PNG Media Council may also consider establishing something similar to the Australian program Media Watch. Such a mechanism could provide media analysis and engage with the public to generate dialogue about the PNG media’s role and the need for it to be accountable.

Tracking media coverage of women in politics: The cartoon shows that the media has a long way to go in terms of addressing gender equitable reporting. Establishing guidelines for gender equitable reporting may help. A media tracking research project designed to conduct text, image, advertising and other analyses might also be useful. This should ideally commence now and be sustained until the next elections. Its aims should be (i) to measure changes in gender equitable coverage; (ii) to support maintain a sustained national campaign; and (iii) as the research suggests, track the links between the media, women’s strategies at accessing media platforms, and how this influences their success at elections.

Obviously these steps will require some resources to be realised. The studies mentioned in this post are comprehensive and detailed, and point to a number of opportunities for media to better support women’s political participation. The challenges facing PNG’s women candidates are daunting, and they deserve more equitable and accountable treatment by the mainstream media.